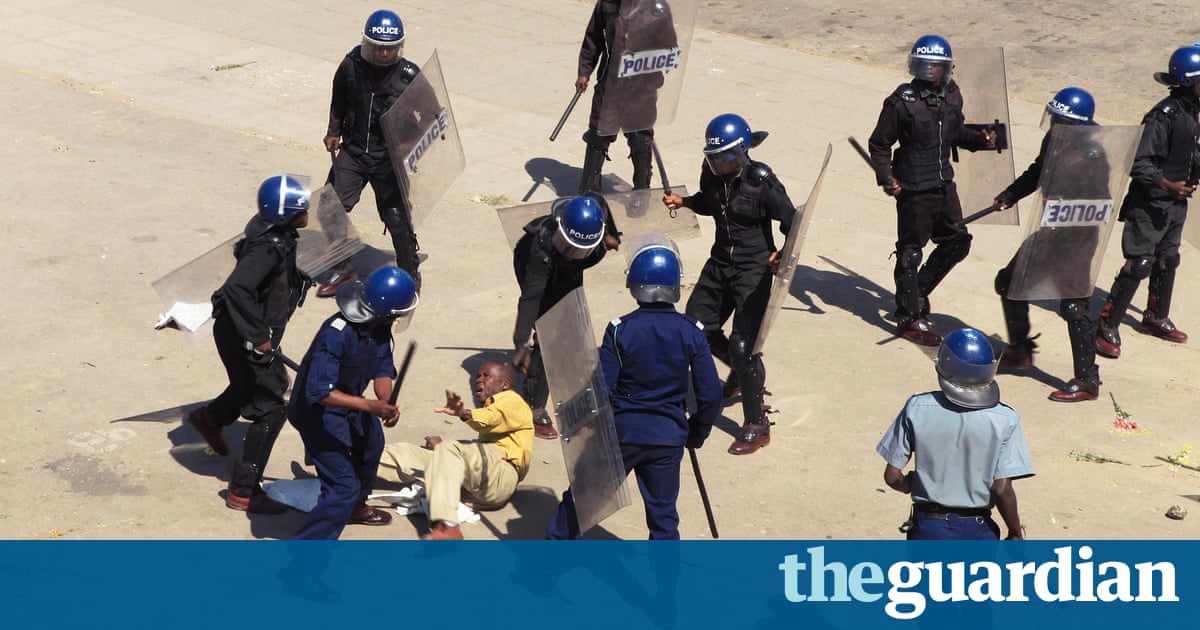 Police in Zimbabwe fired teargas and water cannon on Wednesday to break up a demonstration in the latest round of the most intense unrest in the former British colony for almost a decade.

Officers in riot gear stopped about 200 protesters as they marched through the streets of Harare toward the central bank to protest against a government plan to reintroduce local banknotes. After a short standoff, baton charges scattered the demonstrators. Several sustained head injuries.

Promise Mkwananzi, one of the organisers of the protest, pledged a national shutdown on 31 August. There will be no business as usual, he told Agence France-Presse. Everybody must participate.

The new wave of protests has been prompted by the deteriorating economic situation in Zimbabwe.

Many ordinary people fear the central banks plan to introduce banknotes, or bond notes, in October to ease the dollar shortage will lead to the rampant printing of money, as happened in 2008 when inflation hit 89.7 sextillion per cent, wiping out peoples savings and pensions.

Robert Mugabe, who has been Zimbabwes president for 36 years, has defended the scheme, calling the new notes surrogate currency that would discourage criminals from coming to Zimbabwe to fish for dollars.

We know what happens when the central bank prints money. Our message to Mugabe … is that we dont want those bond notes, said Mkwananzi, a leader of the militant social media movement #Tajamuka slang in the local Shona language for defiance.

Social media have played a key role in the recent protests, which have largely bypassed the established opposition parties.

Movements such as #ThisFlag, led by the activist pastor Evan Mawarire, and #Tajamuka have used Facebook, Twitter and WhatsApp to rally Zimbabweans.

Observers say the pressure on Mugabe, who at 92 is Africas oldest leader, and his Zanu-PF party are immense. A series of controversial measures over the last 20 years, such as stripping white farmers of land more than a decade ago, have caused huge economic disruption.

Now the government is struggling to finance its $4bn (3.1bn) annual budget, and soldiers, police officers, doctors and teachers are being paid weeks in arrears. Foreign investment and donor support has dried up, and anticipated aid from China has not materialised.

In April the government halved its 2016 growth forecast to 1.4%, an estimate that most economists believe is optimistic. A drought threatens up to 4 million people with famine.

Officials have appealed to the International Monetary Fund and other major multilateral lenders for aid. Zimbabwe already owes $8.3bn, of which $1.8bn is in arrears.

Private companies have been nervous about investing in the politically unstable state in recent years, and though the IMF is reportedly keen to restart lending to Zimbabwe, it is likely to demand wide-ranging reforms in return for assistance.

In 2013 Zanu-PF won an election tainted by widespread claims of vote rigging, and some believe further loans would simply allow officials to remain in power. Zimbabwe last witnessed unrest on this scale in April 2007.

Veterans of Zimbabwes independence war made a significant break with Mugabe for the first time last month, calling him dictatorial, manipulative and egocentric.

Mugabe has recently turned toward the Zanu-PF youth league for political support, with two rallies attended by tens of thousands of people.

Analysts say an increasingly intense internal battle between factions seeking to take power when the increasingly frail Mugabe dies has significantly weakened the ruling cliques ability to respond to the economic crisis.