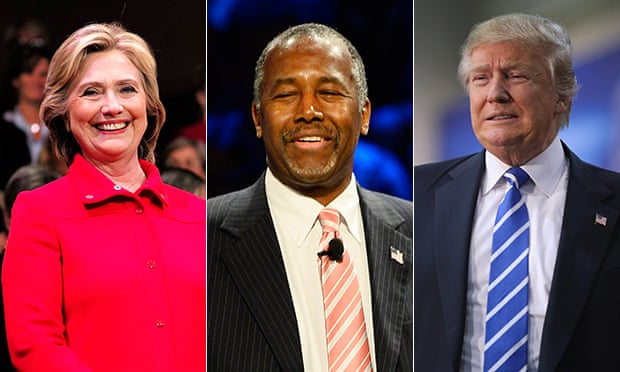 The absurdly long run-up to the US election has begun. This will be the first election fought under new regulations where there are no limits to campaign donations: a change brought in on the grounds of free speech, when the supreme court decided that the Koch brethrennot being able to say, We own the president, contravened their rights under the first amendment. Personally, I guess Obama will be quite lonely once its all over , not least because he has allowed the police to kill most of the other black people.

Differences between the candidates are usually so slight that what the Democratic frontrunner thinks is pretty much just what the Republican frontrunner guesses on the working day that he remembers to take his meds. But in something of a format spin, Bernie Sanders an old-school socialist has crowdfunded himself into a credible posture for the Democratic nomination. I sincerely hope he wins, if only so that we find the first inauguration speech made from inside a giant, bulletproof hamster ball. The Democratic frontrunner is Hillary Clinton, a ruthless, steel-haired troll doll. Hers is the face that would haunt a lot of Libyans nightmares, if they were still alive. Unfortunately for her election prospects, Hillary has never quite learned to introduce humor or compassion into her speaking voice and on a good day sounds like an android trying to trick the last human out of a bunker.

At last weeks Republican debate, presidential candidates accused CNBC of displaying liberal bias. One reading would be that the GOP nominees are now so rightwing that they make a giant media conglomerate look liberal. Lets not forget that the essential message of a Republican nominee is a tricky sell. That you love America, but hate all the groups that make up America. That you love republic, but hate people. Donald Trump, who at best looks like a plughole in an orangutan sanctuary, is likely only operating for chairman because this dimension doesnt have a Superman he can give a hard time to. His hair, looking like a slovenly, postcoital cat, is actually one of the least weird things about him. He is lacking in charm or humour and is virtually ferociously inarticulate. The US public has identified with him strongly. It seems that the electorate, maybe with rational thought, is toying with the idea of cutting out the middleman and simply electing one of the business class through sheer force of Stockholm syndrome.

The old politics is dull, and what could be more exciting than electing a human who might declare war on the sea? His plans to build a giant wall sealing the US border with Mexico are entertaining , not least because it would be interesting to see a nation as heavily armed as America go into cocaine withdrawal. Somehow, I always imagine that Trump spends the evenings with his forehead pressed against the cold glass of an aquarium, talking telepathically to the tormented albino squid in which he has hidden his soul.

Indeed, the whole Republican field offers a bracing challenge to conventional the idea of sanity. The current poll leader is Ben Carson, a neurosurgeon who happens to be a Seventh Day Adventist and creationist. Creationists have often stimulated me doubt evolution, but likely not in the way they guess. His taxation policy is based on Biblical tithing, taking economic pointers from people who had a GDP of one golden calf.

Why do both parties rage against bias in what is actually a laughably servile media? Maybe its because the political class have an instinctive contempt for asking the public to decide anything meaningful, such as policy. So their campaigns have to be largely symbolic affairs about hope or hard work or whatever flavour of horseshit is polling well. Most campaign spending goes on advertising( 65% of Obamas grassroots campaign of 2012 was media expend) and advertising speaks in symbolism. Thus the parties may actually distrust any kind of rational investigation, as what theyre telling doesnt, and cant, make any sense. Or maybe the reality of what theyre voting on is something nobody dare express. Theyre voting on the exact velocity of the float toward a future of armies run by firms corralling permanently travelling communities of cooks, cleaners and sexuality employees, as they underbid one another outside the entrances to gated communities to ensure theyre the ones let inside to service the fortunate. A future where the pursuit of happiness will make about as much sense as mounting an expedition to reach the horizon.

Of course it could be that the whole election is a bit like The X Factor, and they put a few madmen in the early rounds to entice us into something we promised wed never engage with again. By the end well be back to two corporate glove puppets belting out the same tired standards. And no matter how bad the choice is, well always have a preference. Clinton will be offering an expanded kill list of official enemies, secret corporate courts, and her first speech about Palestine will sound like it was written by the Hulk. A plenty of otherwise rational minds will be praying for her to win.