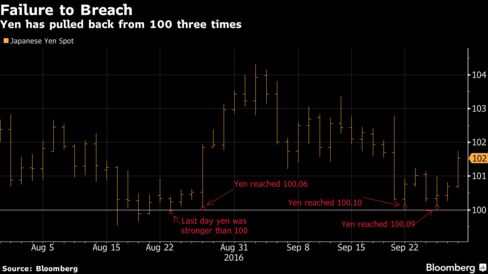 The yens strongest rally in eight years is running into a psychological stop sign at 100.

Japans currency has appreciated to within 0.1 percent of 100 three times since it last traded stronger than that level five weeks ago, then retreated. Traders say it is running into waves of sell orders every time it approaches, spurring speculation there are ways for Japan to limit the currencys strength other than via direct intervention. The yens failure to breach the threshold comes even after the Bank of Japan backed away from deepening its negative interest rates, a decision that would have been expected to bolster the currency.

The yens recent resistance around 100 is spurring some speculation there may be semi-official buying of the dollar, said Takashi Kudo, head of corporate sales division in Tokyo at Moneysquare Japan. The 100-yen level is psychologically important.

The yens halt is reminiscent of recent pullbacks that followed rapid gains in the currency. In February, it surged more than 8 percent in two weeks only to erase a third of the gain days after Japanese Finance Minister Taro Aso warned the government would take appropriate action if necessary. A similar pattern was seen at the end of April.

Japan has been put on a watch list by the U.S. Treasury Department for possible currency manipulation, meaning it cannot overtly influence the level of the yen without being subject to possible penalties. The Bank of Japan appears to have lost its ability to influence the currency as it has strengthened 18 percent this year even as policy makers maintained record stimulus.

One avenue that may influence the currency is the stock market. The central bank purchases 5.7 trillion yen ($56 billion) a year of exchange-traded funds covering local shares. At its Sept. 20-21 meeting, it revised how that amount is distributed, with less spent on the Nikkei 225 Stock Average and more on the Topix, following criticism its ETF buying was distorting the stock market. The yen and local stocks tend to move in opposite directions.

A potential option to stem the yens advance is to take advantage of the correlation between stocks and currencies, said Minori Uchida, head of global markets research at Bank of Tokyo-Mitsubishi UFJ Ltd. in Tokyo. If the yen rises past 100, there might be an increased ETF buying, in an attempt to slow the pace of the yen appreciation.

Japans currency is heading for a third-straight quarterly gain, surging 19 percent since Dec. 31 in its steepest such advance since the nine months ended March 31, 2008.

Tatsuhiro Iwashige, the chief foreign-exchange strategist of the investment solutions group at GCI Asset Management Inc., said he thinks the market is moving on its own without outside control. Given that non-currency markets are under government and central influence, if the yen is artificially kept from rising, the distortion will build and raise the risks of sudden, rapid yen gains, he said.

It takes a lot of courage on the speculators side to push the yen to double-digits, Iwashige said. It requires quite a solid conviction and a catalyst to carry it out.

The Bank of Japan will make the utmost effort to ensure stability in exchange rates, Governor Haruhiko Kuroda said Sept. 26. He added it was desirable for currencies to reflect fundamentals and the central bank would closely monitor the impact of exchange rates on the economy and prices.

The yen failed to breach the 100 level last week even as it rallied for a third week as decisions taken at parallel two-day meetings by the Bank of Japan and Federal Reserve were seen as bullish for the Japanese currency.

The BOJ shifted its focus to targeting the yield curve and away from currency-weakening monetary expansion. The Fed refrained from raising U.S. interest rates hours later, saying it needed more time to assess the economy.

People thought the disappointing results from the BOJ and the Fed would push the yen past 100 but its resilient near 100 per dollar, said Michiyoshi Kato, senior vice president of foreign-currency sales at Mizuho Bank Ltd. in Tokyo. It seems difficult to speculatively attack the yen to get it past 100, at least for now.

‘Out of sight’: Trump confirms USS John McCain was hidden from his view