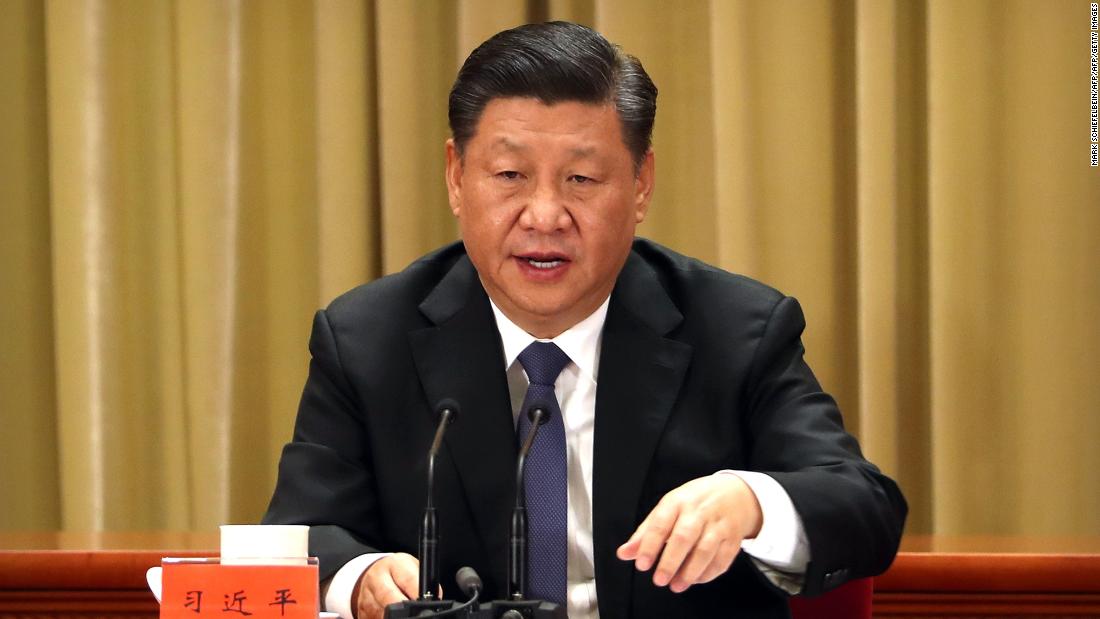 Hong Kong (CNN)Xi Jinping called on Taiwan to reject independence and embrace “peaceful reunification” with China, in a conciliatory speech that nevertheless took a hard line on the self-governing island’s political sovereignty and freedoms.

By contrast, the latest speech — marking 40 years since a key policy document opened the door for rapprochement between Beijing and Taipei — was largely procedural, even outlining how a future system would respect Taiwanese people’s “private assets, religions, beliefs and legitimate rights,” as Xi attempted to portray the future unification of China and Taiwan as an inevitability.
“Reunification is the historical trend and the right path, Taiwan independence is … a dead end,” he said.
Taiwan has been de facto independent from mainland China since the end of the country’s civil war in 1949 when the losing nationalist government fled to Taipei. China’s Communist Party has always maintained that Taiwan is part of its territory and vowed to pursue reunification, vacillating between building economic and social ties with the island and threatening it militarily. 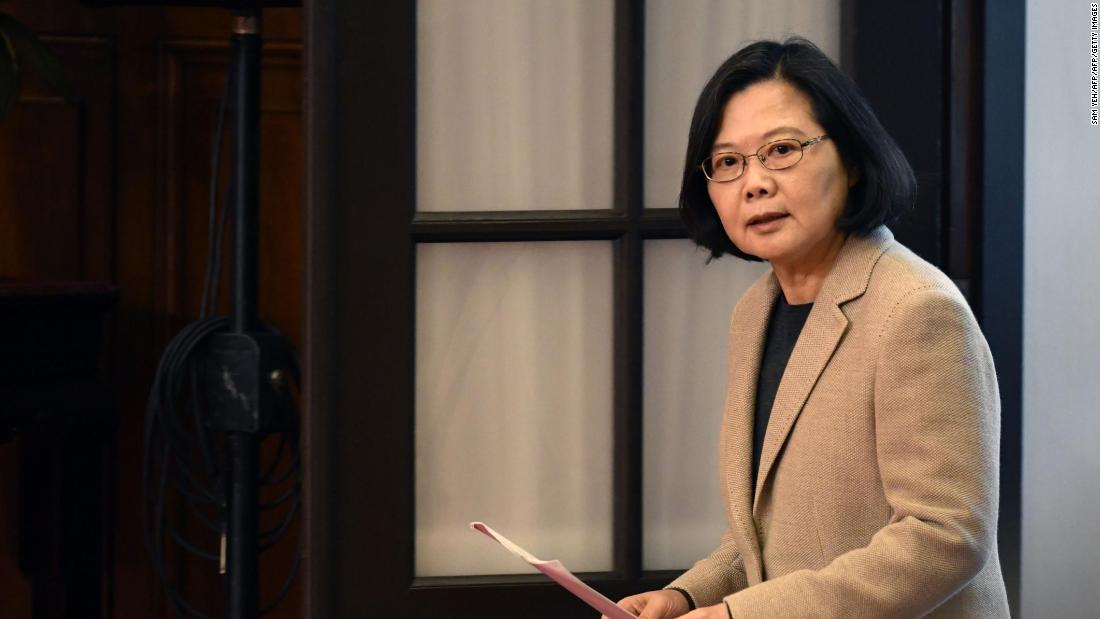 Xi’s speech comes a day after Taiwanese President Tsai Ing-wen gave her own New Year’s address, in which she called on Beijing to “face the reality of the existence of the Republic of China,” referring to the island by its official name. She also urged that Beijing to “respect the commitment of the 23 million people of Taiwan to freedom and democracy.”
Tsai resigned as head of the Democratic Progressive Party (DPP) in November after the historically pro-independence party suffered a crushing defeat in local government elections, which also saw voters reject a proposal for the island to compete in international sporting events as “Taiwan” rather than “Chinese Taipei,” a moniker adopted after pressure from Beijing.
While she acknowledged the elections were a “serious test for the current government,” Tsai said the results “absolutely do not mean that grassroots public opinion in Taiwan favors abandoning our sovereignty, nor do they mean that the people want to make concessions regarding Taiwanese identity.”
She also pointed to allegations of Chinese influence over those elections, saying Beijing’s “attempts to use the openness and freedom of our democratic system to interfere in Taiwan’s internal politics and social development (have) now become Taiwan’s greatest challenge.”
During his speech, Xi said China had “achieved a great victory in frustrating the Taiwan independence movement and other separatist activities.”
Lev Nachman, a Taiwan specialist and PhD student in Political Science at the University of California Irvine, said this appeared to be an oblique acknowledgment of interference in the island’s politics.
“I am not sure we are going to get a more clear direct admittance from Xi himself that the (Chinese Communist Party) interferes with Taiwan’s democratic elections,” he said. “This is something we have always known was a phenomenon, but never really had any ‘hard proof’.”
Nachman said Xi’s speech showed Beijing “now more than ever anticipates that Taiwan will naturally head towards a unification path.”
“If the CCP is confident it can stop the DPP from maintaining its status as the governing party and can even actively help restore the KMT to power, it has no need to use force,” he added, referring to the pro-unification Kuomintang, which governed Taiwan for decades following the Chinese civil war. 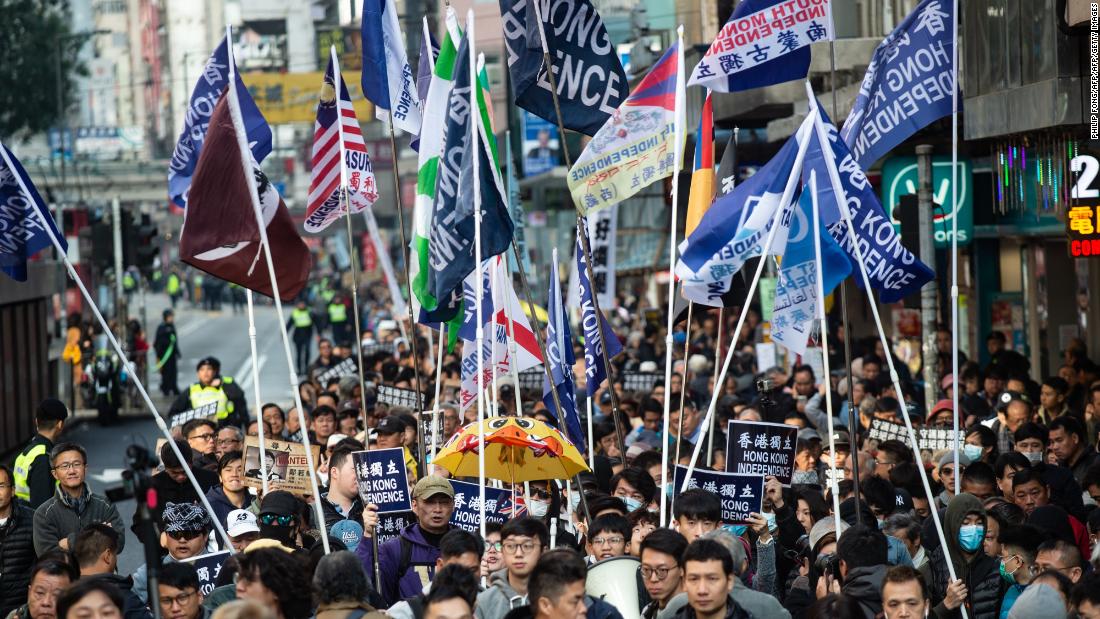 Throughout his speech — and those of other Chinese officials introducing him — Xi pointed to “One Country, Two Systems” as the model for Taiwanese reunification.
That is the principle by which Hong Kong transferred from British to Chinese sovereignty in 1997, maintaining the city’s limited democracy, economic system and political freedoms under Chinese rule. For many years, Hong Kong was seen as a model for Taiwan, an advertisement for future reunification, and Xi’s speech harkened back to this.
“One Country, Two Systems was raised to accommodate Taiwan’s reality and safeguard the interests and benefits of Taiwan compatriots … under the precondition of ensuring national sovereignty and national security,” Xi said.
How attractive a model Hong Kong is to many in Taiwan is debatable, however, as recent years have seen Beijing renege on promises to expand democratic rights, and multiple prominent pro-democracy figures have been jailed, harassed and banned from standing for election. Political and press freedoms have also declined in the city.
“Xi’s call to Hong Kong as the One Country, Two Systems experiment I think shows what an ideal ‘unification’ looks like from Beijing’s perspective: put Taiwan in a position that allows some autonomy still, but slowly erode it until it is retaken completely,” Nachman said.
“Xi would like Taiwanese people to see themselves as in the same position as Hong Kongers, which they do not.”
Speaking in Taipei Wednesday following Xi’s speech, Tsai said the island would not accept a Hong Kong-style arrangement, and called on Beijing to respect Taiwan’s political sovereignty.

‘No promise to renounce force’

While Xi’s speech was conciliatory, emphasizing the need for “peaceful reunification” above all else, he did not rule out military force if Taiwan were to pursue de jure as well as its longtime de facto independence.
“We are willing to create broad space for peaceful reunification, but will leave no room for any form of separatist activities,” he said.
“We make no promise to renounce the use of force and reserve the option of taking all necessary means,” he said, adding that the “issue of Taiwan is part of China’s domestic politics (and) foreign interference is intolerable.”
While it does not formally recognize Taiwan, the US maintains strong ties with Taipei, which have been bolstered under US President Donald Trump.
In November, the US Navy sailed two ships through the Taiwan Strait, and Washington recently upgraded its de facto embassy in Taipei, the American Institute in Taiwan, to the tune of $255 million.