The Houston Astros battle with the Los Angeles Dodgers offers a brief respite for a city grappling with the aftermath of Hurricane Harvey, two months later 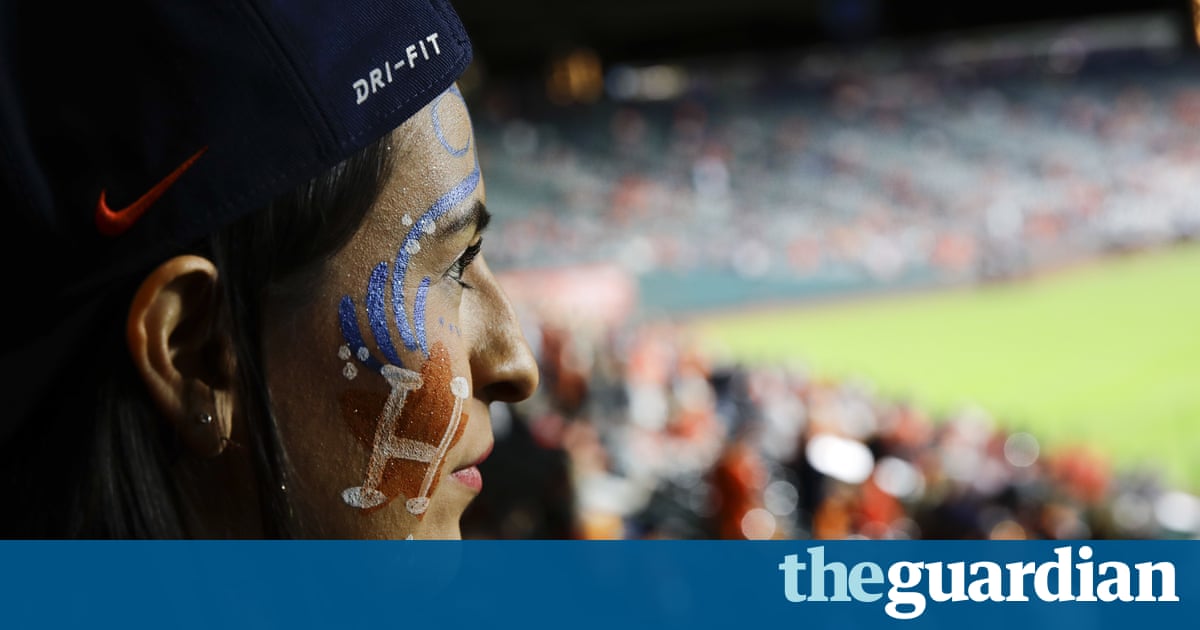 Downtown streets in Houston that, just two months ago, were filled with the displaced and desperate, were packed on Friday night with high-spirited baseball fans as a city on a long road to recovery relished the distraction of a World Series game.

While sporting success could never be anything more than light relief to those whose lives have been upended by Hurricane Harvey, Houston has embraced its baseball team and leading sports clubs and players have donated money and boosted their community outreach efforts in the wake of the floods.

The NFL star JJ Watt, of the Houston Texans, who raised about $37m for hurricane relief, threw out the ceremonial first pitch in game three of the series between the Houston Astros and the Los Angeles Dodgers.

“I think it’ll definitely give them a lift,” said Jeff Dietzel, 65, an Astros fan since 1978. “A lot of people were down and this is going to pick up their spirits.” He sat outside the ballpark on Friday afternoon, waiting for it to open, as fans milled around before the start of game.

On ticket resale sites, sellers asked $700 and up for nosebleed seats. Private parking lots a couple of blocks from the ballpark charged $60; street parking is typically $2 an hour.

Minute Maid Park, where the team moved to from the Astrodome in 2000, is a short walk from the George R Brown Convention Center, which acted as a shelter during the storm. More than 10,000 people stayed there. It did not close until 18 September – three and a half weeks after Harvey made landfall as a category 4 hurricane about 180 miles south-west of the city and stalled, dumping historic levels of rainfall on south-east Texas.

The storm damaged an estimated 100,000 homes in the Houston area, caused billions of dollars’ worth of damage and killed more than 80 people in the state, including a 31-year-old man from Galveston who died last week from a flesh-eating bacterial infection he contracted during clean-up work.

Before Friday’s game, fans lined up outside a Catholic church opposite the ballpark to buy rosaries and bracelets in Astros colours, with proceeds going towards church renovations.

Church members went to the convention center to hold mass and offer spiritual guidance during the floods to “all the people that were devastated and distraught, without homes, without cars”, said Greg Womack, a volunteer clad in an Astros jersey.

“The Astros have caused a lot of exuberance here in Houston, everybody’s inspired,” he said. “This theme of Houston Strong, the city’s going to come back from the flood – the Astros organisation has embraced the spirit of the city as a whole.”

The church held sales for high-profile games during the season and Womack has noticed a trend. “Whenever we sell out of rosary beads prior to a game,” he said, “the Astros tend to win.”

Flooding forced the Astros to relocate three home games to St Petersburg, Florida, at the end of August. Just before a midnight trade deadline on 31 August, the Astros signed an elite pitcher, Justin Verlander, in a deal with the Detroit Tigers. He has donated $100,000 to a fund to assist military families affected by the floods while the team’s ownership and foundation has pledged $4m to relief efforts.

Verlander’s performances helped propel the Astros to only their second World Series since their debut in 1962. Their previous appearance on Major League Baseball’s biggest stage ended in defeat to the Chicago White Sox in 2005. Before Friday’s game, the best-of-seven series was tied at one game apiece. Houston also hosts games on Saturday and Sunday.

After hitting a home run at Dodger Stadium that tied the second game in the ninth inning on Wednesday, the outfielder Marwin Gonzalez pointed to the “H Strong” patch that the players are wearing on their shirts.

There was plenty for the home crowd to cheer on Friday as the Astros won, 5-3, giving them a 2-1 lead in the series. The outcome will not have surprised anyone at the Annunciation Catholic Church: it had sold out of beads.