The singer-turned-politician is the latest young African challenging the old guard. He has given his nation hope that Musevenis 32-year rule might end, says Ugandan journalist Patience Akumu 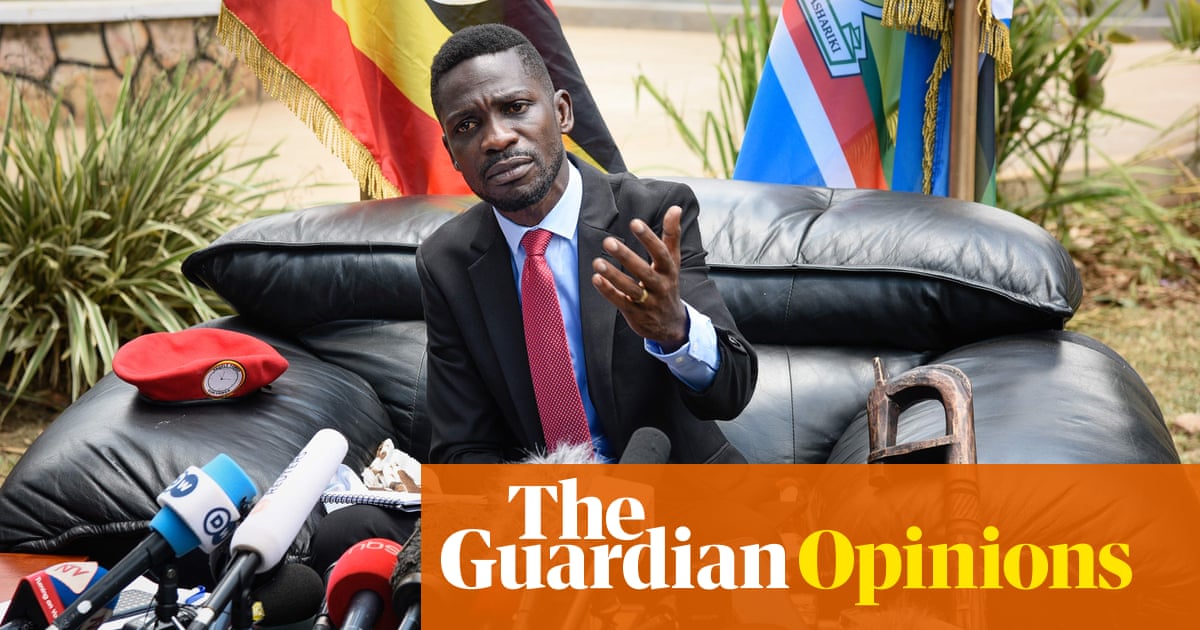 We Are Fighting for Freedom is the unofficial anthem of Kamwokya, a slum in Kampala, Uganda, where the musician-turned-politician Robert Kyagulanyi Ssentamu – whose stage name is Bobi Wine – grew up. Kyagulanyi released the song to express his anger at attempts to amend the constitution to give President Yoweri Museveni yet another term in office, after 32 years in power. The song can be heard through torn curtains and across open sewers, mixing potently with the resolute words Free Bobi, which are sprayed across fragile walls.

The government is terrified of Kyagulanyi. It has clobbered his supporters and journalists, and even imposed an electricity blackout as he was due to appear on Voice of America. The money it has tried to use to bribe Kyagulanyi’s young supporters from the ghettoes, called the “people power” movement, betrays its desperation. It lends credence to the idea that Kyagulanyi is on to something bigger than he realises.

In August, he was arrested after his driver, Yasin Kawuma, was shot dead during a local election. The government had been restless over Kyagulanyi’s ability to turn the tide of an election. Every candidate he endorses wins. After his arrest a military court charged him with unlawful possession of firearms, and the military paraded guns and tried to convince Ugandans the weapons had been found in his hotel room. When it became clear the story didn’t add up, the charges were dropped and, emaciated and limping, he was released, after weeks in a military prison. He was handed over to police, charged with treason and held in a civil prison.

His arrest won him international sympathy and put him in the ranks of young Africans challenging the old guard’s hold on power – alongside Rwanda’s Diane Rwigara, who at 38 has stood up to Paul Kagame’s presidency, as well as opposition leaders in South Africa and Zimbabwe. After pressure from social media activists, diplomatic missions and civil society organisations, Kyagulanyi was released on bail after nearly a month.

Three-quarters of Uganda’s population are under 35. Kamwokya’s residents support 36-year-old Kyagulanyi because he is, like them, young, hungry and angry that the only president they have known is Museveni, 74. They realise the man they sang nursery rhymes in praise of is not indispensable, and that their poverty is not inevitable. Kyagulanyi’s journey from the ghetto to Magere – a middle-class area of Kampala – is an inspiration. Unlike previous opposition leaders, Kyagulanyi does not have links to the establishment or a military background. His wealth, unlike that of most of Uganda’s rich, is traceable. He was born in the ghetto: a life of crime and drugs beckoned. But, through music, he rose above it, made money and changed his life. So when he talks about transformation, his supporters believe he can do for the nation what he did for himself.

Yet Uganda has been in this state of hope before – in every election since Museveni took power in 1986. Kizza Besigye, who has run and lost against Museveni four times – twice in elections the courts found to be flawed (but not flawed enough to justify the nullification of the entire election) – also seemed to have support. Crowds followed him, and people lined up for hours to vote.

But in Uganda popular support – and, indeed, people power – mean nothing, and Museveni knows it. Why? Because beyond angry social media posts and insulting memes, most Ugandans will not dare leave the comfort of their keyboards and risk being killed in the name of change. Museveni knows all he has to do is remind the international community that without his army – which is always available for peacekeeping missions, wherever the UN and US want them – the region could combust into conflict, leading to another refugee crisis. So governments around the world continue to fund various Museveni projects, including Uganda’s military.

But people power supporters are not ordinary Ugandans, content to make a noise in the safety of the internet. Kyagulanyi’s most ardent supporters have experienced the poverty that lies behind the statistics. They have gone to bed hungry many times. They have known hopelessness. The rea l freedom from their daily malaise is yet to be won but they will not let hope go.