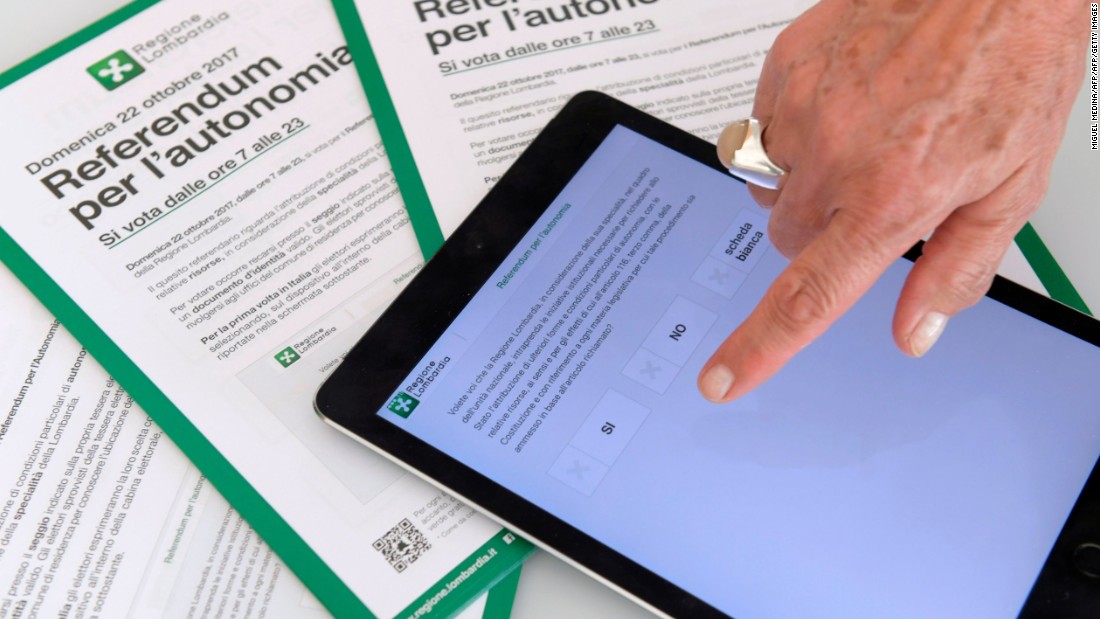 Rome (CNN)While the rest of the world has its eyes on the outcome of Catalonia’s tussle for independence, two of Italy’s most prosperous regions are set to go against the establishment with a vote of their own.

Initiated by the local governors, both of whom are part of the right-wing Northern League, a party that once favored secession, the vote is aimed at securing further powers over spending, immigration, education and healthcare.
Five regions in Italy already boast autonomous powers, including Sardinia and Sicily, as well as Veneto’s neighbor, Friuli-Venezia. 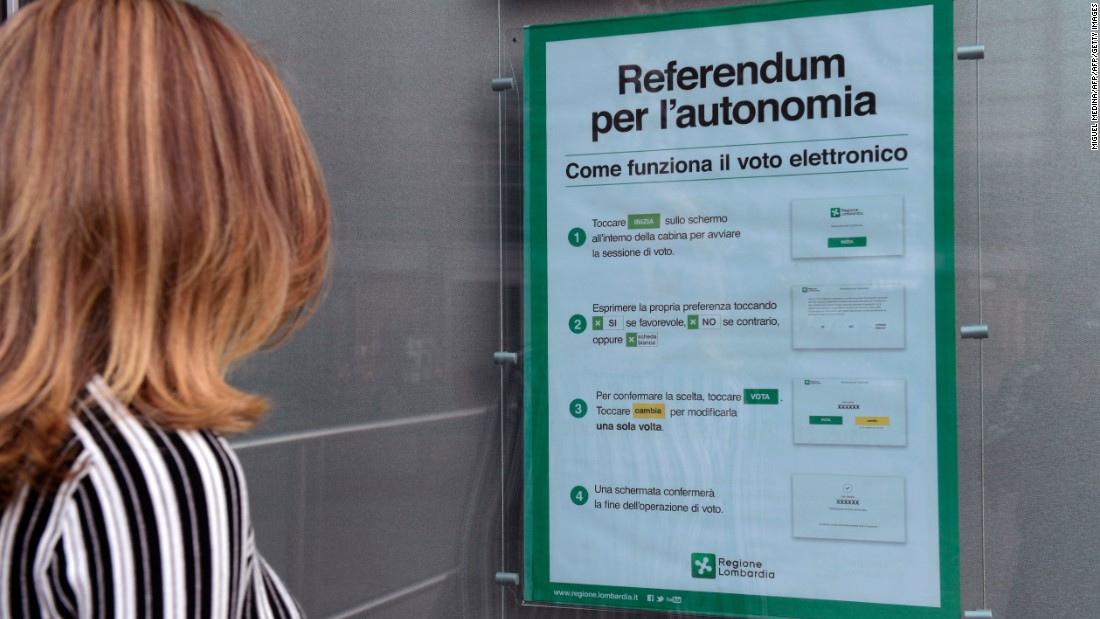 On October 22, citizens in the northern regions of Lombardy (which includes the city of Milan) and Veneto (which has Venice as its capital) will hold a referendum about asking for greater autonomy from Rome.
The votes were called by the two regional leaders, Roberto Maroni of Lombardy and Luca Zaia of Veneto. The referendum is non-binding but local leaders believe it would give them a mandate to negotiate with Rome for further powers.
“We aim to have enough power to break the resistance of the government,” Maroni told CNN. “We want to manage the territory, manage the areas that handle migratory flows.”
“For us, the most important thing is obtaining resources,” he added.
Unlike the independence referendum in Catalonia, which was declared illegal by the Spanish government, the Italian constitution allows for these types of votes to be held.
And in a first for Italy, voting in Lombardy will be carried out on tablet computers via an E-voting app, while Veneto will retain more traditional methods.

Why are the votes important?

Politicians backing the referendums believe the successful economies of their region should not be used to fund poorer areas in the south of Italy. 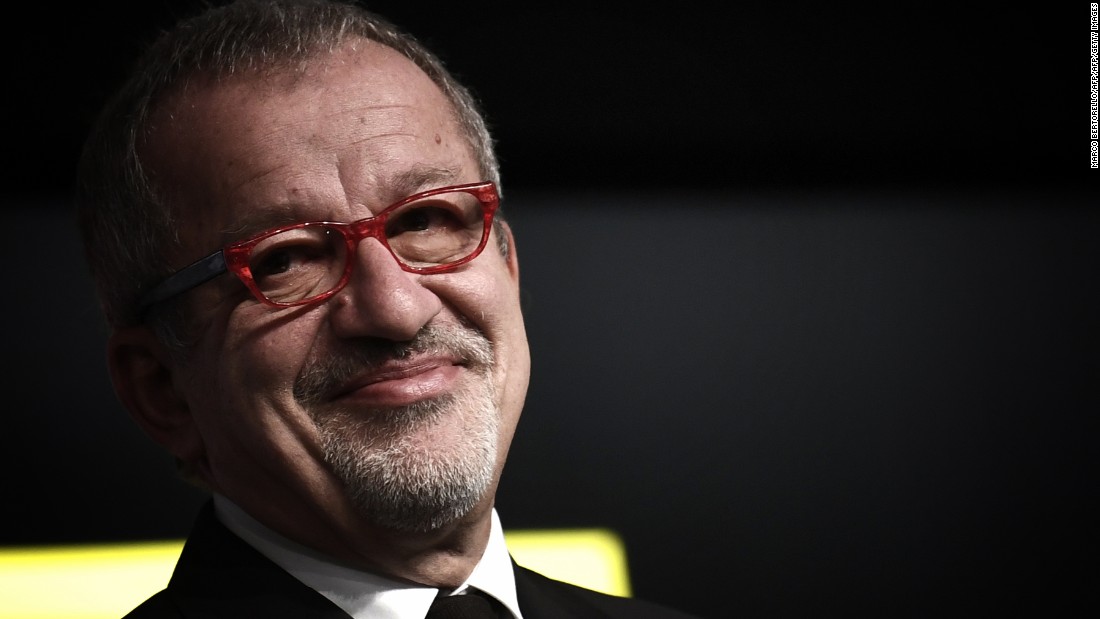 Maroni wants to slash his Lombardy’s tax bill by at least 50%, claiming it sends more than €54 billion to Rome than it does in return. In Veneto, Zaia believes the deficit is around €20 billion and wants his region reimbursed.
The move comes ahead of the Northern League’s attempt to increase its share of the vote in next year’s general election.
“Saying I am enthusiastic is an understatement, I can’t wait for the vote,” Northern League leader Matteo Salvini told Italian newspaper Corriere Della Sera.
“Finally after 30 years there is an official date, institutional, recognized and legal to include citizens in this project of autonomy. Venetians and Lombardi, 15 million people, will be able to express themselves by asking for more autonomy and more money. It is the triumph of liberty.”

Is this a pattern?

The vote comes at a time when separatist movements have been gaining traction. 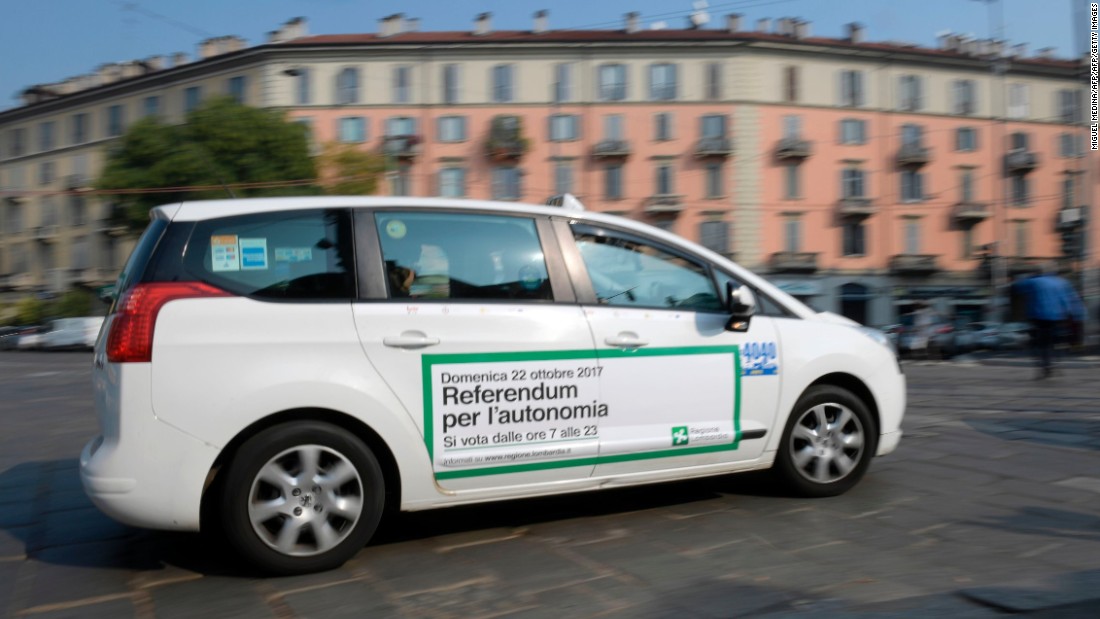 Britain’s decision to leave the European Union and the ongoing tension between Catalonia and Spain are two of the highest-profile cases currently playing out.
There is also the prospect of a second Scottish independence referendum, though such a move has lost momentum over the past year.
Away from Europe, Iraqi Kurds voted in favor of declaring independence from Iraq, while there has also been secessionist violence in Cameroon.
But in Italy, it’s different. 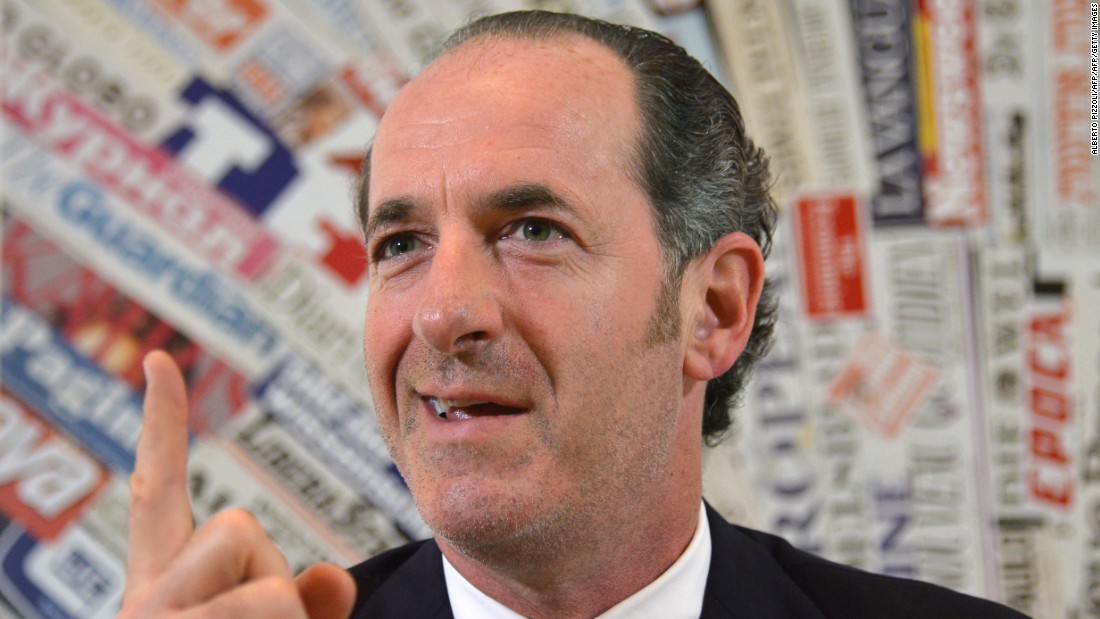 In the 1990s, the Northern League campaigned to create the independent state of Padania, which would would stretch across the north of the country, following the Po river around Lombardy in the west and Venice in the east.
Now, the party’s dream of an independent state has been put on hold in pursuit of national success in next year’s election.
“From the juridical standpoint, there is no analogy with the Brexit referendum,” Zaia said in his party’s manifesto.
“The objectives are radically different. The referendum of Veneto does not question a break in either the supranational right nor with respect to international law, nor with respect to the Italian constitution.”
He added: “Unlike Brexit, this will create a positive impact. The referendum of Veneto is destined to have a strong impact.”