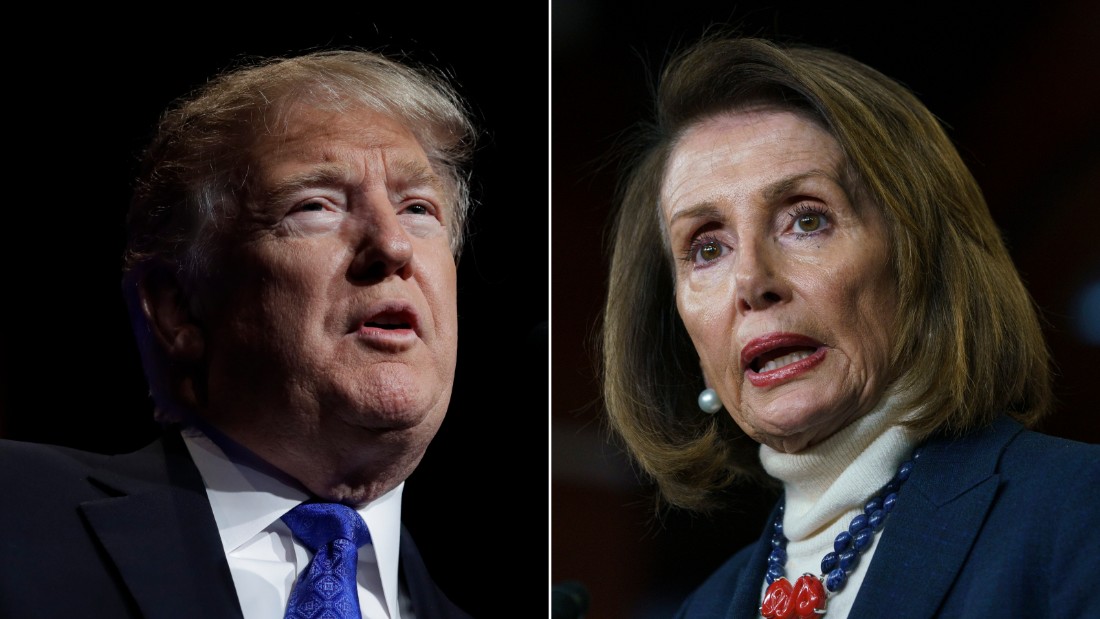 (CNN)It should be good news that both President Donald Trump’s Republicans and Speaker Nancy Pelosi’s Democrats plan to vote to reopen the government this week.

Trump on Saturday made his most significant move yet in an impasse now nearly a month in by offering temporary protections for some undocumented immigrants in return for $5.7 billion in funding for his border wall. 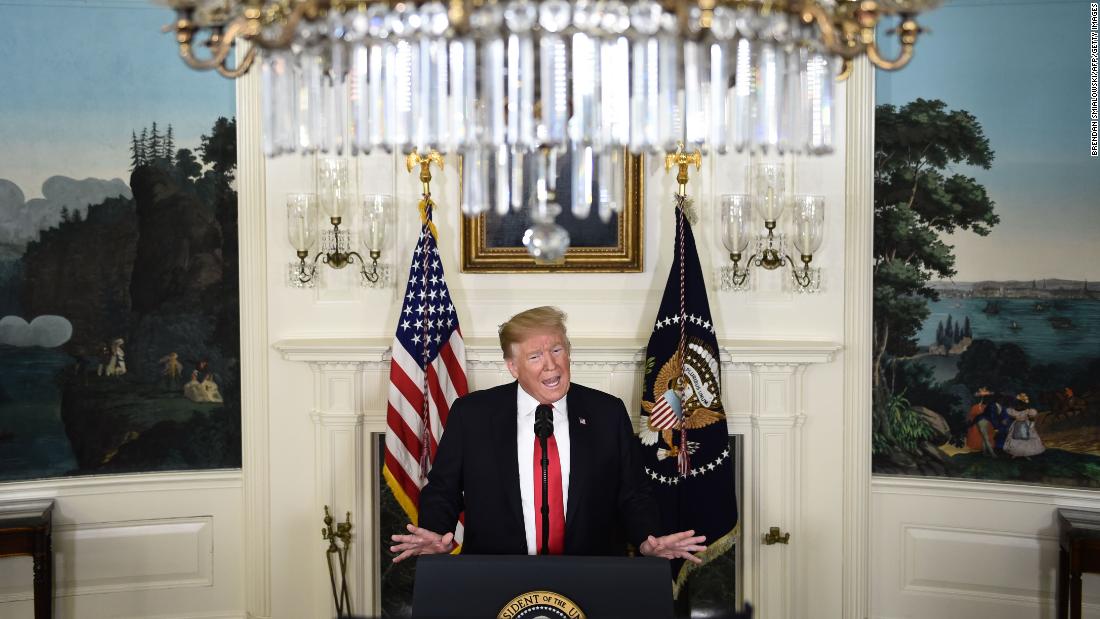 As Republicans see it, Trump’s speech from the White House is a statesmanlike effort to meet Democrats halfway in a bid to end the partial government shutdown.
“This is a common-sense compromise both parties should embrace,” Trump said.
But the plan, negotiated within the White House and among Republicans, was never likely to entice the support of Democrats since it does little to address their concerns. And Democrats insist that the government reopen before talks on thorny immigration issues begin.
Trump’s proposal is unlikely to get 800,000 federal workers now missing paychecks back to work. So the question is whether it will be any more successful for the President in transferring the blame he is currently shouldering for the shutdown to Democrats.
In many ways, Trump’s approach is familiar. The President ignited a crisis last month by closing the government in a last bid to get taxpayer money for a wall that is crucial to his political standing and that he had said Mexico would pay for.
Then, as on other issues, like his trade wars with US allies, he offers a plan to end a crisis he precipitated that doesn’t fully address the issue, but that he can sell as a great deal everyone should sign up to.
Trump certainly gave the impression of moving toward Democrats by offering a three-year reprieve from deportation for undocumented migrants brought to the US as children and protection to thousands of other migrants.
And by styling his wall as “steel barriers in high-priority locations” in the speech and not a concrete slab from “sea to shining sea,” the President also appeared to soften his positions.
His plan does allow more mainstream Republicans to argue he is making an effort and that Pelosi’s Democrats are standing in the way of reopening the government.
“For the President to put this out there, I think, was a bold move,” Rep. Adam Kinzinger, an Illinois Republican, said Sunday on CNN. “For the Democrats to just reject it because there is a barrier in there — come back with a counterproposal that’s serious then, but not one that says here is a counterproposal but in no way will we ever talk about a barrier.”

By even hinting at concessions, Trump angered far right pundits like Ann Coulter, who blasted his “amnesty” in the kind of backlash that has caused him to back down from compromise immigrations solutions in the past.
Trump spent Sunday sending out tweets designed to protect his right flank by denying his plan equated to amnesty for immigrants covered by the Deferred Action for Childhood Arrivals program.
And he sought to build pressure on Pelosi — by insulting her home city.
“Nancy Pelosi has behaved so irrationally & has gone so far to the left that she has now officially become a Radical Democrat. She is so petrified of the ‘lefties’ in her party that she has lost control…And by the way, clean up the streets in San Francisco, they are disgusting!” he tweeted.
Pelosi, in the latest engagement in their power duel, which will define Washington for the next two years, tweeted back at Trump, though she shrugged off his insults, in a sign that Democrats still believe they have the stronger position.
“@realDonaldTrump, 800,000 Americans are going without pay. Re-open the government, let workers get their paychecks and then we can discuss how we can come together to protect the border. #EndTheShutdown,” the California Democrat tweeted.
She did not even wait for Trump’s speech on Saturday to brand it a nonstarter.
One reason is that a string of recent polls find the public blames Trump more than Democrats for the situation.
Democrats see the Trump plan as delivering his biggest priority — the wall — but offering little in return. The wall would be permanent, while protection for the DACA recipients would be temporary and they could be held hostage again.
And it was the President himself who ended DACA and temporary protected status for certain immigrants from other nations. So he is offering a short-term reprieve from a limbo he himself created. Had the White House offered permanent protection under a path to citizenship, his offer might have enticed Democrats — but it would have caused a firestorm among Trump’s base voters.
“My counteroffer would be what we put on the table a year ago and voted for, which was protect all dreamers, protect TPS status,” said Democratic senator and new 2020 presidential candidate Kirsten Gillibrand on CNN’s “State of the Union.”
“We, as Democrats, certainly care about national security and border security,” said Gillibrand, making clear she would vote for comprehensive border security but not Trump’s wall — a distinction that could potentially be finessed in any final deal to give both sides the chance to declare victory.
But the Democratic bottom line is that Trump must open government before negotiations on immigration can start. Otherwise, the fear is that he can use the same tactic to browbeat the Democratic House majority in the future.
The party also knows that Trump wants nothing more than to go back to his voters in the 2020 election and say he followed through on his promise to build the wall — even if it is a hollow version of his original vision.
Democrats also see the latest offer as simply an effort by the White House to ease Trump’s political plight, so they have little incentive to let him off the hook.
“I think the vice president and President know what the President announced yesterday would not go anywhere,” said Rep. Adam Schiff, a California Democrat, on CBS’ “Face the Nation.”
“It wasn’t intended to. I think it was an effort to prop up the President’s sagging poll numbers. It did nothing to get us close together.”

The return of McConnell

The question in the days ahead is whether Democrats can hold the political higher ground or whether voters not fully familiar with the intricacies of the shutdown will see Trump making an effort and start to place blame more equally between the President and his opponents.
The politics of the shutdown could also be reshaped by the reappearance of Senate Majority Leader Mitch McConnell — after weeks of unusual invisibility.
The Kentucky Republican has pledged to put Trump’s offer on the floor of the Senate this week, along with other inducements to moderate Democratic senators to break with their party’s line.
CNN’s Phil Mattingly reported Saturday that the package will include an extension of the Violence Against Women Act as well as the President’s plan for hundreds of millions in humanitarian aid and drug detection technology.
For Senate Republicans, the Trump proposal has the merit of allowing them to unite to open the government and could ease the concerns of some moderate members who fear the impact of the shutdown on 2020 re-election races.
Democrats will counter that the House has voted to reopen the government multiple times already but the Senate has refused to take up any measure Trump won’t sign.
The House Democratic leadership plans its own vote on a new plan this week to add an extra $1 billion for border security not including the wall. Like Trump’s plan, it is unlikely to end the shutdown but will help rebut claims they are weak on the border.
As each chamber takes up dueling measures to end the shutdown and the President continues posturing, it will look yet again like Washington is playing its political games and ignoring shutdown victims.
But just maybe, a period of legislative maneuvering could eventually produce a slim overlap of each side’s position that could open the way for the Capitol Hill fudge that is usually how showdowns end in divided government.
It just may take awhile, a fact that will not console federal workers victimized by their own government.