The iPhone was a weird new invention when Barack Obama was first running for president in 2007. MySpace utterly dominated social media; no one had heard of Twitter. Netflix was a company that delivered DVDs by mail. The box office was dominated by a Marvel franchise, a bombastic Zack Snyder movie, and a movie about somebody called Jason Bourne. It was a simpler time.

When you see how radically the landscape has changed since then — and how radically it seems to be changing on a week-to-week basis now — it’s actually hard to guess what the presidential campaign for 2024 will look like. But, having spent these last two weeks on the ground at both party conventions, I’m ready to give it a shot:

#5. Voters Will Be More About Single Issues (And Hobbies) Than Parties

With the exception of the small but vocal Never Trump movement, the vast majority of Republicans either fell in line behind Trump this year or, like the Bushes, quietly excused themselves. 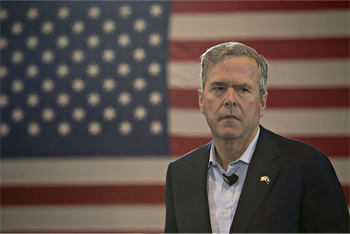 One of them was pretty quiet even before he excused himself.

The Democrats at the DNC displayed much less unity, and the word “less” in that sentence is actually a synonym for “fucking none at all.” Or, at least, that was the view from outside; many of Bernie Sanders’ 1,900 delegates refused his calls to back Hillary Clinton and, instead, walked out of the convention and held a strike in the nearby press tent. You know all of those “HILL-AR-Y” chants that kept breaking out during her acceptance speech last night? Those were delegates covering up Bernie chants.

When I sat down and actually talked to Bernie’s delegates (dozens of them) about why they were so pissed, I expected to hear a lot about the recent Wikileaks release of thousands of controversial emails from inside the Democratic National Committee. But most folks felt like Brad Batt of Tennessee. “The DNC emails didn’t really change my opinion,” he said. “It was already pretty clear the DNC supported Hillary.”

Instead, their fury came from the fact that the Democratic party hadn’t promised action on more of the issues Senator Sanders’ campaigned on. Some of them, like “Bernie Or Bust” founder Victor Tiffany, actually felt like Trump might be better for their cause. “If it’s Trump, we get to take a break for a few months because we don’t have to fight the [Trans-Pacific Partnership].” 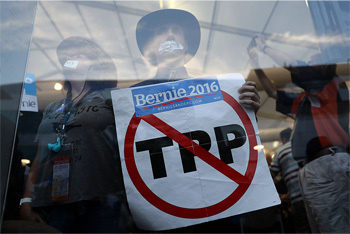 If they back up their words with votes, this will be a pretty huge change.

It’s hard to overstate how important party loyalty has always been in American politics — the “winner take all” nature of presidential elections (thanks to the electoral college) means you either joined the group that got you to 50 percent or got tossed aside like a Taco Bell wrapper flung from a speeding car on the highway. But today it seems like young and engaged people are more loyal to specific issues than a party. Look around; if there’s anything social media is good at, it’s forming people into tightly packed groups based around one idea they consider paramount (“Anime should be subtitled, not dubbed!”)

Sure, there have always been so-called “single-issue voters” — enough Republicans factor a hobby into their voting that the tchotchke-sellers outside the RNC did a brisk business in Second Amendment flags: 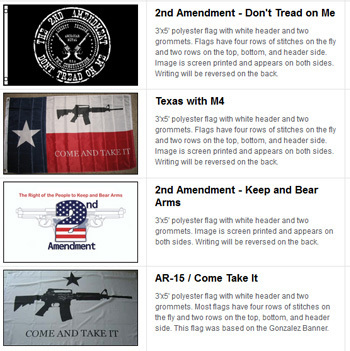 But, social media now lets everyone gather, organize, and form their own little versions of the gun lobby. Before the conventions, I interviewed Grover Norquist, a veteran political advocate for the Republican party. He was bullish on the future of Hobby Politics and brought up vaping as a hill many young Republicans would pick to die (or at least vote) on in the near future. “All the left wing groups want to ban vaping,” he told me, “for the same reason baptists want to ban dancing.”

Grover thinks Republicans may be able to counter some of the demographic advantages the Democratic party has among millennials and minorities by collecting home-schooled kids, concealed handgun carriers (“Today there are 13 million Americans with an active conceal carry permit … that’s 5.5 percent of the population”), and vapists — people who don’t think of themselves as “small government” but still have one personal issue they want to keep free from bureaucratic meddling.

It’s worth noting that vaping was everywhere at the RNC and banned at the DNC.

“First, they came for the vapers, and I was not a vaper, so I said nothing … “

Thanks to Facebook, Tumblr, Twitter, and the rest, these niche issues can drive thriving communities, whether that issue is the Trans-Pacific Partnership (a sprawling proposed trade agreement that both parties now seem to hate) or the belief that vaccines cause autism. It’s kind of like how you never heard of a furry convention until the internet came along and gave those guys an easy way to find each other. These “single issue” voters (“We demand the right to drink unpasteurized milk!”) can now join together and form blocs that demand a seat at the table. If they feel rejected, they can tip an election.

The social media era also means that, in the future …

Tragically, I don’t think we’re going to see Donald Trump or Hillary Clinton jump a bunch of buses on a motorcycle anytime soon (I would immediately vote for any candidate who did — I’m that sort of single-issue voter) but it does mean that any politician who wants to succeed in the future has to be good at going viral. This was clearly illustrated by Chris Christie and Ted Cruz at the RNC.

Christie took what would’ve once been the “safe” approach, backing his party’s presumptive nominee and hoping that’d turn into a sweet gig if Trump wins. But Ted Cruz refused to endorse Trump in a very public speech, basically flipping him a double-bird and earning an entire internet’s worth of free press for his trouble: 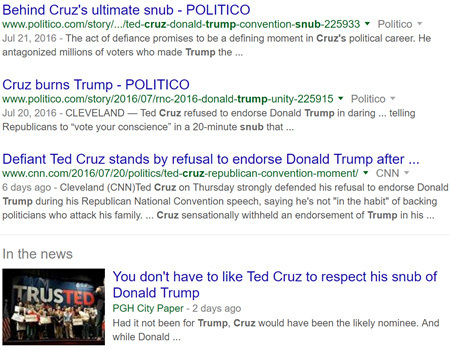 Meanwhile, most of the press Chris Christie got out of the RNC focused on how damn sad he looked every time a camera found its way to his face. 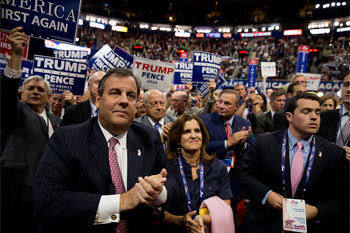 The moment he discovered clapping only saves Tinker Bell, not political careers.

Over at the DNC, half the coverage of the convention that saw the nomination of the first major female presidential candidate in American goddamn history centered on Bernie Sanders delegates and supporters who staged a walk-out and a series of copy-cat occupations of the press tent. Victor Tiffany, who claimed to have suggested the idea of a walk-out four months ago, told me, “The inside strategy was to scare the fuck out of people.”

We’re at a point in American politics where being the center of a viral story can do more than just win you 15 minutes of fame. It can bring in millions, even tens of millions, in donations. Hell, Donald Trump’s entire campaign is basically one long series of ridiculous stunts. A decade ago, shit like calling Mexican immigrants rapists, mocking a disabled reporter, urging violence against protesters, or asking the Russian government to commit felonies against a political rival would’ve been the end of a career …

… but all that is how Donald Trump built his political career from “nonexistent” to “candidate for president of the United States” in a year.

In a crowded field of candidates, Trump knew that the main struggle for everyone in the field (that is, the ones who didn’t happen to be a celebrity and reality show star) was simply getting the word out — if Marco Rubio was to have a chance, he needed to introduce himself to the country. Trump simply denied him the chance — while Rubio was on stage unveiling some initiative or other, Trump was dominating the online conversation with a crude joke he made. It’s a sort of Kanye West/Taylor Swift mic-snatching strategy, only if Kanye had actually been allowed to keep Swift’s award as a result, and Swift had been forced into the witness protection program.

#3. Candidates With An Elected History Will Be Kind Of Screwed

“Trump is a media king. But he doesn’t have blood on his hands compared to Clinton. I don’t fear Trump. I fear Hillary.”

This quote from Harold Bustamente, yet another Sanders delegate I spoke with, was echoed by dozens of other delegates and protesters I spoke to during the DNC. Whether they were talking about the coup she backed in Honduras, American intervention in Libya, or her perceived love of drone strikes … 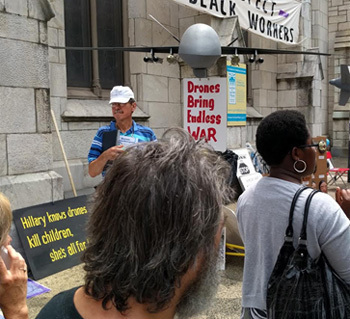 … I lost track of the number of times someone told me Hillary Clinton had “blood on her hands.” And, while you can certainly debate whether or not those were good or bad decisions, the simple reality is that there’s no way to be at Hillary Clinton’s level in politics without getting blood on your hands (not to mention the fact that she was secretary of state, rather than a dictator with sole discretion over foreign policy). And, while Bernie Sanders’ long and consistent voting record certainly helped him, he also benefited from the fact that he hasn’t often been called upon to make the same sort of life-and-death decisions.

Over on the Republican side of things, Trump benefited enormously from the fact that he’d never had to make any kind of political decisions, ever, in his life. He was able to hammer Rubio for a failed attempt at immigration reform, Christie for his Bridgegate scandal, and Ted Cruz for his role in the government shutdown. It’s not for nothing that, of the three Republican presidential candidates who actually had a shot at becoming the 2016 nominee, two of them (Trump and Ben Carson) had zero prior political experience. 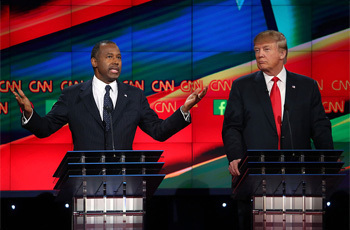 We’ve been heading this direction for a while — the ideal candidate is someone who is A) charismatic and B) has no record to attack. Remember, Obama had served a whopping two years in federal government before launching his run for president. George W. Bush had only four and a half years as governor of Texas on his resume, and absolutely nothing else — his job before that was helping run the Texas Rangers baseball team. And they sucked.