Unless some asshole just cut you off in traffic, you probably don’t give much thought to how important your fingers are. People yearn for sexier legs, flatter stomachs, or bigger … noses, but no one says, “Man, I wish my index finger was 0.2 inches longer.” And that’s too bad, because science now has reason to believe that if your fingers were longer or shorter, you might literally be a different person.

Being able to tell if someone is gay merely by looking at their fingers sounds like one of those playground urban myths that adolescent males use as an excuse to punch each other. (Is this the “hand size” thing Donald Trump is weirdly obsessed with?) But it’s a real thing. It’s called digit ratio theory, and multiple studies from all over the world seem to confirm it.

Apparently, if you have a longer ring finger, it means you got more testosterone as a fetus, and that has huge implications for your life, even beyond the stereotypical aggression and aversion to sleeves. A longer index finger, on the other hand, means more estrogen, making you more neurotic and sensitive.

A mega-study Voltronned from the results of 18 other studies concluded that women with “masculine” hands (shorter index fingers) are indeed more likely to be gay. A lesbian-centric finger length study from Rutgers even found a noticeable difference between self-identified “butch” ladies who drive trucks and wear flannel and the more feminine lesbians who tend to populate straight dudes’ fantasies.

So if you’re male and your index finger is way longer than your ring finger, you’re like the most fabulous dude ever, right? They’re still doing the science on that one. Some studies say it’s the other way around, and some say there’s actually no difference. Finger length does vary between ethnicities, so it’s possible that this is true in America, but not in Europe.

So how far into this entry did you get before you stopped to look at your fingers? Oh, you’ll be doing that a lot more before we get to the end of this article …

The Longer A Man’s Ring Finger Is, The More Women Are Attracted To His Face

Hey, here’s a factoid to either boost your self-confidence or totally kill it: Women think guys with long ring fingers have more attractive faces. But only the ring finger. Guys with long index fingers? Eh, not so much.

It sounds bizarre, but it goes back to what we told you before: The longer your ring finger, the more testosterone you received in the womb. A study led by scientist Camille Ferdenzi of the University of Geneva confirmed that above all other factors (including body odor drawn from the sweaty armpits of men of varying degrees of manliness), the length of the ring finger pretty much sealed the deal on how attractive a man’s face was to a woman. 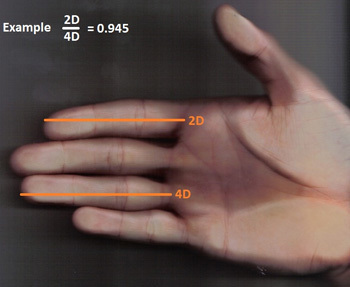 Determining this relation between testosterone and the face involved a complex experiment of showing pictures of men to a bunch of women and having them give a rating for masculinity and attractiveness. Over and over, long-ring-finger guys were all rated as having the best faces. So size does matter — just not where you may think.

What’s odd — but consistent with what we told you in this article about women being attracted to feminine male faces — was that a positive attraction rating wasn’t always paired with a masculine rating. This means that it’s possible that a man could have a longer ring finger, which means having more prenatal testosterone and thus a more attractive face, but not actually look more masculine. We’re calling this the Legolas Effect.

But gentlemen, don’t start plucking your eyebrows and donning your elf ears just yet. Like we said, this is prenatal testosterone, which is different from the fluctuating adult testosterone determining tone of voice and body odor, and it’s more or less unchangeable because its work is done once you’re born. Once you’re out, no more fetal testosterone for you. Which is rather unfortunate, considering the next part …

Here’s another side effect of your mom’s womb skimping on testosterone and giving you a shorter ring finger: It makes you more susceptible to anxiety, depression, and eating disorders. But don’t worry, long-ring-finger people have their own issues.

6 Signs That Disney Is Trying To Take Over The World

Before you ask, yes, that “eating disorder” part goes for men too. One study measured men’s fingers and had them fill out questionnaires about eating behaviors and attitudes, and found that men with less prenatal testosterone (and shorter ring fingers) had less drive for muscularity, greater drive for leanness, and scored higher on disordered eating symptoms. Meanwhile, a study focused on twins found that women who were exposed to more testosterone (due to being womb-mates with a dude for nine months) showed less propensity toward eating disorders. So does this debunk our sexist notion that eating disorders are a “girl thing,” or prove it? No idea, we lost track.

Conversely, if your ring finger is unusually long, which means you scored the testosterone jackpot, then your grand prize is an increased risk of autism. Scientists still aren’t really sure what causes autism or what it even is, but one theory is the “extreme male-brain hypothesis,” which sounds like a painful condition in which all you can think about is monster trucks and wrestling. What it really means is that having extremely “masculine” traits (like preferring to think about things and systems rather than people) is a recipe for a mental disorder.

The theory is supported by the fact that people with autism have been found to have had greater prenatal testosterone exposure — which, again, is indicated by having a longer fourth than second finger. Other disorders related to these higher levels of prenatal testosterone (and to a “masculinized brain”) include ADHD and Tourette’s syndrome. Oh, and if that’s not depressing enough, your finger ratio might even predict your chances of committing suicide.

To test one bizarre theory, researchers took a camera, some rulers, and went and got some corpse fingers. Researchers “enrolled 71 corpses” in the study, who had been dead anywhere from seven hours to 14 days. Some deaths were by suicide, others by natural causes. The corpses’ hands were photographed, finger lengths measured, and longer fourth fingers indeed were correlated with suicide. The researchers didn’t find a correlation between suicide method and finger length, but they were ready with an explanation for this, speculating that the failure “might be due to us investigating an insufficient number of suicide corpses.”

OK, that’s the most metal thing science has ever said.

These fascinating/alarming factoids first appeared in 5 Insignificant Things That Determine Who You Have Sex With, 6 Ridiculous Sex Myths (That Are Actually True), and 4 Random Things That Predict Huge Health Problems Later, right here on Cracked!

Tiny fingers doesn’t mean you can’t have big dreams. Even though it’s cold, put on some training gloves and get out there and run!