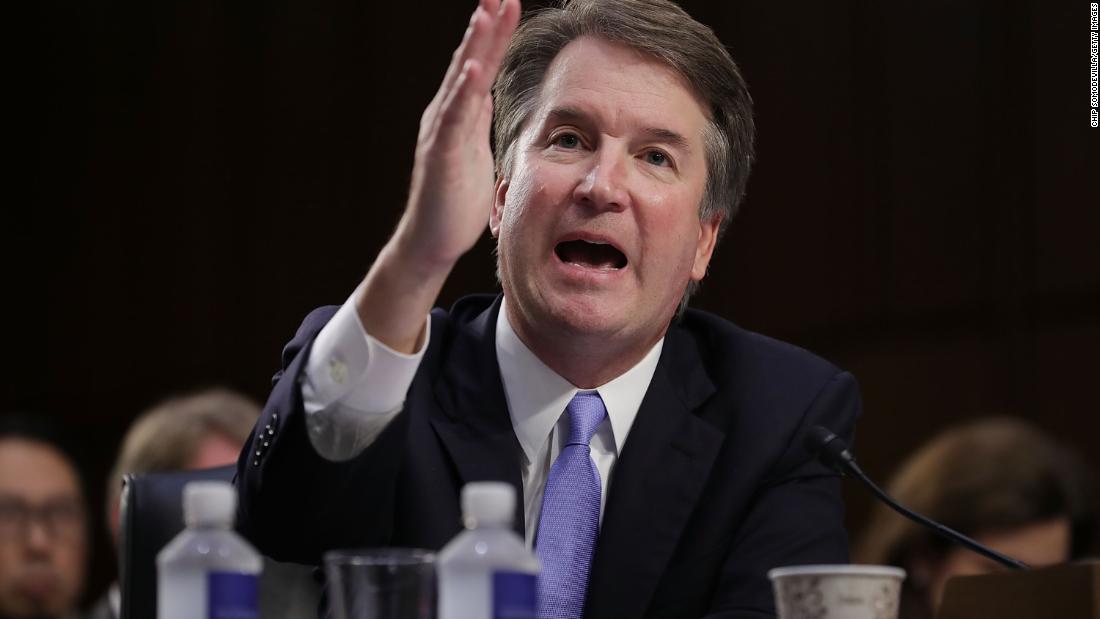 (CNN)The decision by Christine Blasey Ford to reveal her identity, days after reports that an anonymous woman had alleged she was sexually assaulted by Supreme Court nominee Brett Kavanaugh in high school, is a total game-changer, not just for Kavanaugh’s chances of making it to the nation’s highest court but also for Republicans looking for some way — any way — to preserve their congressional majorities in exactly 50 days’ time.

Then Ford came forward. And the story she told — Kavanaugh, while in high school at Georgetown Preparatory School and “stumbling drunk,” had forced himself on her and tried to take off her swimsuit. She said that she first told someone of the incident, which happened in the early 1980s, in couples’ therapy in 2012. Notes from the therapist obtained by the Post show that Ford mentioned an incident with boys from “from an elitist boys’ school,” but do not single out Kavanaugh by name. Ford’s husband, Russell, confirmed that his wife had told him of the alleged attack in 2012.
Then came the news Monday morning — via Ford’s attorney — that she would be willing to not only testify before the Judiciary Committee but to do so publicly. And the floodgates opened.
Sens. Bob Corker (R-Tenn.) and Jeff Flake (R-Ariz.), both of whom are retiring and neither of whom is a big fan of President Donald Trump, insisted that no vote on Kavanaugh’s confirmation could happen unless and until the Senate Judiciary Committee got a chance to hear from Ford directly. Within hours, critical moderates Lisa Murkowski (R-Alaska) and Susan Collins (R-Maine) were expressing their own concerns about their party pushing forward on a planned Thursday vote to get Kavanaugh out of committee. “Professor Ford and Judge Kavanaugh should both testify under oath before the Judiciary Committee,” tweeted Collins just after noon on Monday.

Suddenly Kavanaugh, who had released a terse statement on Friday in which he “categorically and unequivocally” denied Ford’s account, was revamping that statement. Considerably. Here’s what he said on Monday:
“This is a completely false allegation. I have never done anything like what the accuser describes—to her or to anyone. Because this never happened, I had no idea who was making this accusation until she identified herself yesterday. I am willing to talk to the Senate Judiciary Committee in any way the Committee deems appropriate to refute this false allegation, from 36 years ago, and defend my integrity.”
What happened here is simple: Ford called Republicans’ bluff. As an anonymous accuser, her allegations weren’t going to change Kavanaugh’s glide path to the Supreme Court. As a named accuser, she complicated that path. As a named accuser who has now expressed a willingness to tell her story — and in public — there is no longer a clear path to Kavanaugh’s confirmation. (That’s not to say he can’t make it. It is to say that there is no clear path by which he makes it.)
The reason Kavanaugh’s path is now so fraught is a unique combination of the moment in which we are currently living, the man in the White House and the onrushing midterm elections. Let’s go through each one.

The story of powerful men abusing their positions to intimidate, assault and, in some cases, rape women is the dominant cultural narrative of 2018. From Harvey Weinstein to Kevin Spacey to Les Moonves to Matt Lauer to John Conyers, a cavalcade of some of the most powerful people in media, entertainment and politics have been exposed for their inappropriate actions around women. Now we are talking about a public allegation of sexual assault directed at someone who is on the doorstep of securing a lifetime appointment to the nation’s highest court. Simply saying — as the White House and Judiciary Committee Chairman Chuck Grassley have tried to over the past 96 hours — that the allegations made no difference in the planned committee vote on Kavanaugh is simply untenable in this climate. Grassley bowed to that reality Monday afternoon, releasing a statement that said in part: “Anyone who comes forward as Dr. Ford has deserves to be heard, so I will continue working on a way to hear her out in an appropriate, precedented and respectful manner.”
Kellyanne Conway also acknowledged the reality, saying Monday, “She should not be ignored or insulted, she should be heard.”

When Trump won the 2016 election, more than a dozen women had made allegations against him ranging from forcible groping to sexual assault. (Trump denied all of the allegations and pledged that he would sue each and every one of the women for defamation; he has brought a total of zero of those cases to date.) In the final weeks of that campaign, a tape made during a Trump appearance on “Access Hollywood” in the 2000s was released. In the tape, Trump can be heard telling “Access” host Billy Bush that “when you’re a star,” women let you do anything to them. Trump apologized for the comments in the moment, insisting it was “locker room talk.” Within the past year, Trump has raised questions about the authenticity of his voice on the tape. Then there’s this: Longtime Trump lawyer Michael Cohen has told authorities that at Trump’s direction, he coordinated hush payments — to a porn star and a former Playboy Playmate — in order to keep their stories of alleged affairs with Trump from going public in the course of the 2016 presidential campaign.

Kavanaugh’s confirmation was, until Sunday afternoon, going to be a major talking point for Republican candidates to rev up their base. “We got two conservatives on the court!” Now that argument is either moot or a political negative. Sure, there are likely some within the GOP who believe that Ford’s allegations are nothing more than Democrats saying and doing absolutely anything to thwart Trump. But poll after poll suggests that Trump is deeply unpopular nationally — just 36% approved of the job he was doing in CNN’s newest poll. Even more troubling for Republicans is that just 28% of women approved of the job Trump is doing in office while 64% disapproved. Even more troubling than that? (Yes, it gets worse). Fully 57% of women said they disapproved strongly of the job Trump is doing. In an election that Republicans are beginning to acknowledge will be a referendum on Trump, numbers like those were already bad. To throw this Kavanaugh bomb into the middle of all of that presents the possibility of historically large losses for Republicans if this whole thing is perceived by the public as being mishandled or handled callously.
Republicans have already begun to move on the Ford accusations. The combination of Collin’s tweet and Grassley’s statement means that it is now a near-certainty that both Ford and Kavanaugh will testify about this incident — perhaps as soon as this week. Where it goes from there is anyone’s guess, but remember that time is not Republicans’ friend here. The longer the Ford accusation stays in the news, the more likely it is to impact the midterms. And if Kavanaugh’s confirmation is either postponed or scrapped entirely, it raises the very real prospect that the Supreme Court stays open through the election, opening up the possibility that Democrats retake the Senate in 50 days’ time and force Trump to nominate someone more to their liking.
In short: This is a massive moment in Washington politics — with legal and political implications that could long outlast the Trump presidency.