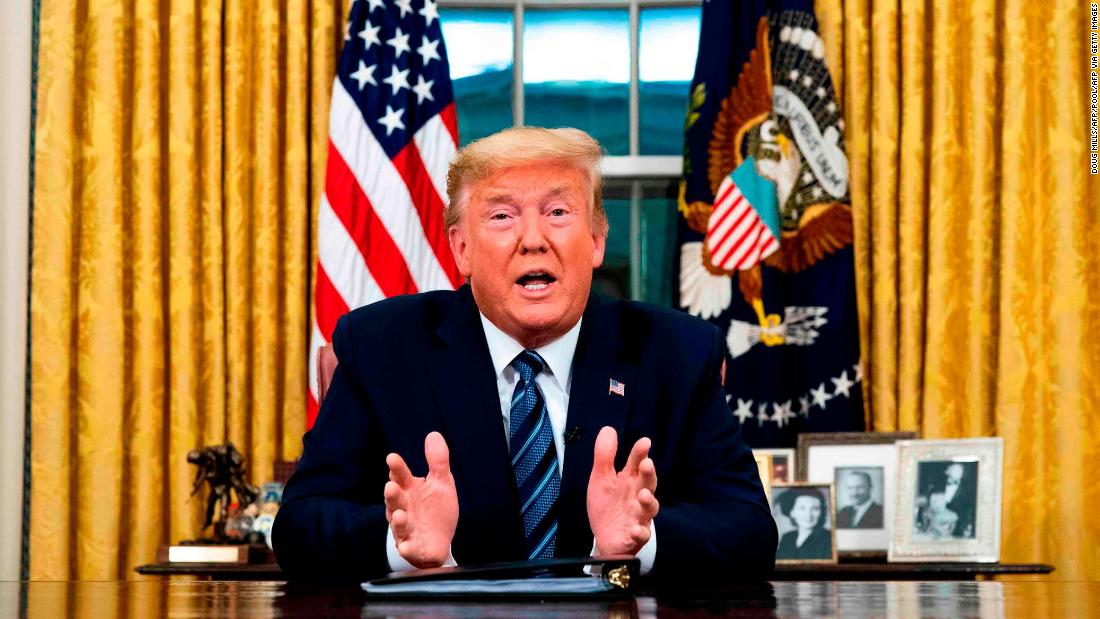 (CNN)This is a fact: Over the weekend, at Mar-a-Lago, President Donald Trump came into contact with a Brazilian press aide who was diagnosed Thursday with coronavirus.

Despite that indisputable reality, Trump has so far refused to be tested for the virus. Asked about the press aide’s positive test on Thursday, Trump responded this way: “Let’s put it this way, I’m not concerned, OK?”
That’s consistent with his reaction when informed that Reps. Doug Collins of Georgia and Matt Gaetz of Florida had both interacted with a person who had tested positive for coronavirus at the Conservative Political Action Committee.
“I don’t think it’s a big deal, I would do it, I don’t feel any reason — I feel extremely good,” said Trump, adding he had “no symptoms, no anything.”
That is a deeply irresponsible view for anyone — much less the President of the United States — to take.
(Side note: It also appears to be untrue. “He is very concerned about all the people he met who have it, including the Brazilian,” a source close to the President told CNN’s Jim Acosta.)
Here’s why: Trump is a 73-year-old man who we KNOW has been exposed to the virus. People who have coronavirus can be asymptomatic for days or even weeks — and by continuing to carry on your normal daily life, you run the risk of infecting lots and lots of people if you do, in fact, have the virus.
What the country is currently in the process of is an attempt to “flatten the curve” on the infection rate, working to slow down the rate of spread in order to ensure that the medical community can keep up with the number of people who are sick, and ensure proper care for each and every one of them.
That’s why schools are closed. The NBA is shuttered. And Broadway is dark. In order to contain this outbreak, we all have to adjust the ways in which we are used to living. That includes making sure that we are good members of the community — and not accidentally spreading this virus to others, especially the elderly and those with compromised immune systems.
Leaders should know that. Leaders need to model the behavior — even if it is uncomfortable — that they need from the public. Leaders need to be the best of us.
At the moment, Trump is not doing that. He’s doing the opposite. Given his documented exposure, it is absolutely reckless for him to continue his current, normal behavior without getting tested. On a daily basis, he is meeting with high-level officials across the government without knowing whether he is infecting them.
(It is, of course, possible that Trump has been tested and we haven’t been told about it or the results aren’t known yet. But that seems unlikely. And either way, medical recommendations would suggest he should be self-quarantining if he believes himself to have the virus.)
Don’t take it from me. Check out this exchange Friday morning between NBC’s Willie Geist and Dr. Anthony Fauci, the head of the National Institute of Allergy and Infectious Disease:
Geist: Just to piggyback on what Mika said, we know the President of the United States over the weekend at Mar-a-Lago himself was standing with and had physical contact with someone from Brazil who now has been diagnosed with coronavirus. Should the President himself be tested for coronavirus?
Fauci: I’d leave that to the President’s physician. He — they have a very good White House physician and physician staff there. So when you have a situation of a patient doctor relationship, the advice for that should come from the White House physician.
Geist: But generally speaking if I were standing next to someone who had been diagnosed with coronavirus should I isolate myself and find a test as well?
Fauci: Yes.
So, yeah. Fauci is doing his best to avoid saying the President needs to be tested while also saying, effectively, the President needs to be tested.
The simple fact is this: It is crazy that Trump has seemingly not been tested for coronavirus. Absolutely crazy.