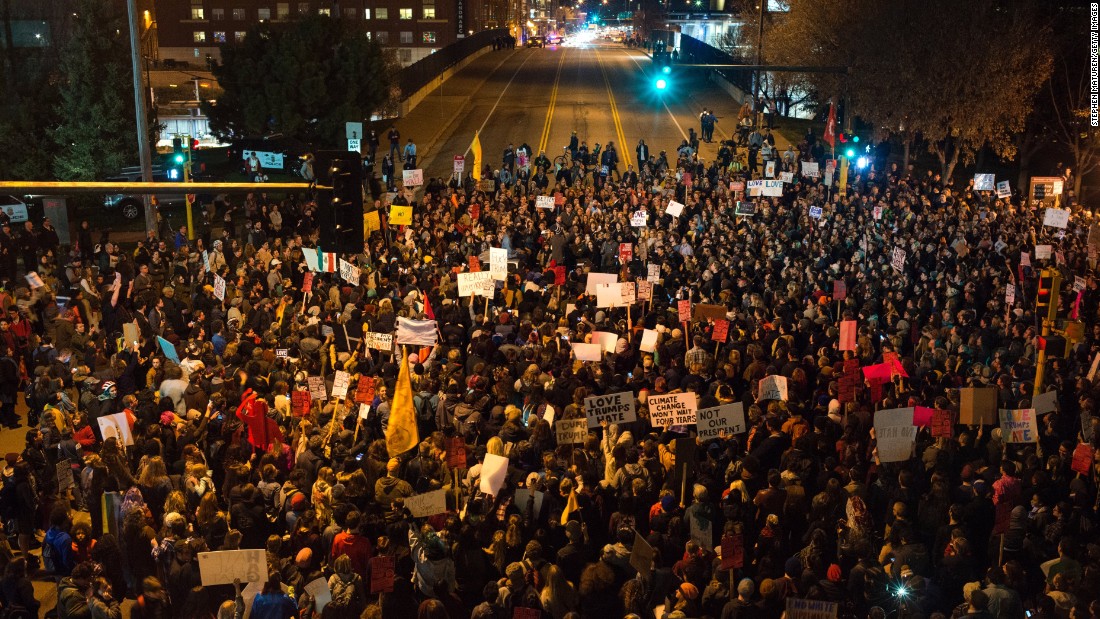 (CNN)A football coach from Charlotte, a project manager from Florida and a teaching assistant from Iowa. Three people from three different backgrounds with a dedication to three different causes. But there’s one thing that united them this year: They were among the thousands who took to the streets across the nation and captured the moment for social platforms.

Here’s a look at three of the year’s biggest protests through the eyes of the three, as they reflect on that day and what came after.
Charlotte’s night of chaos | North Dakota’s water warriors | Iowa’s election angst

Zach Locke remembers it vividly: the pungent taste of the tear gas, the ringing sound of gunshots and the chaos and confusion of a city erupting in anger.

It was September 21 and Locke, along with his roommate, joined hundreds of others who had descended on Charlotte to protest the fatal police shooting of Keith Lamont Scott. Before Scott, there had been Alton Sterling and Philando Castile. After Scott, there would be others. Frustration had been bubbling. Black lives matter, echoed the chants from Baton Rouge to Minneapolis.
Locke is a local football coach and he and his roommate were practicing when Scott was shot on September 20. He remembered seeing squad cars speed past them and a chopper fly overhead.
“I think it kind of hit us, because it happened just down the road from us,” Locke told CNN.

And so, he marched the following night.
“Honestly, neither of us knew what to expect,” he told CNN. “We just kind of wanted to be there. We wanted to witness and take part in a huge moment for our city and community.’
But then, the night took a sharp turn. A peaceful protest turned into a disorderly riot. 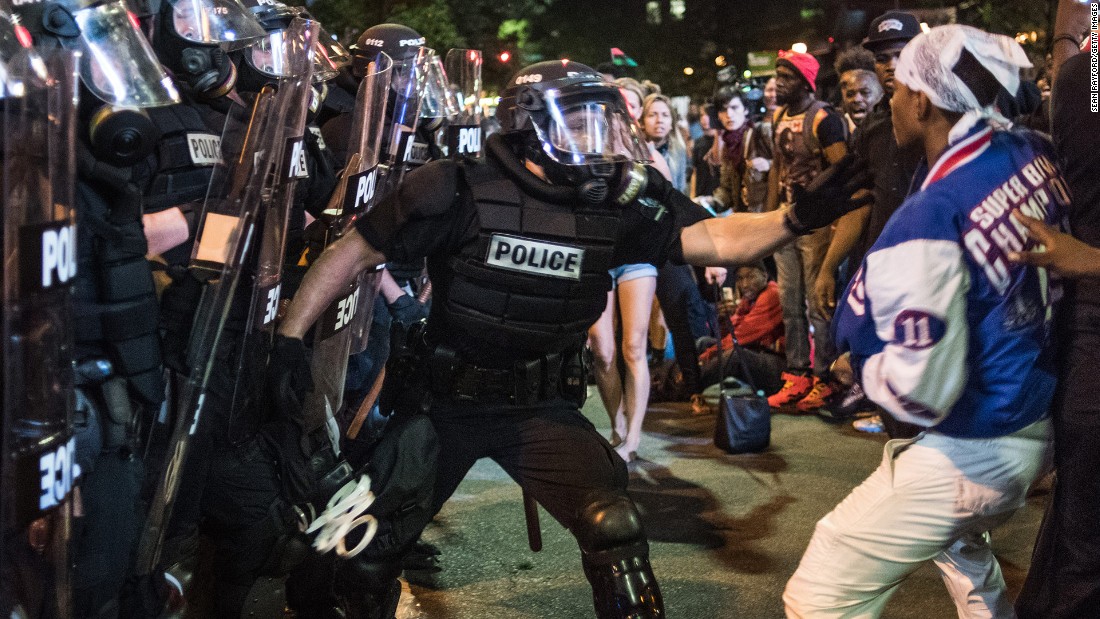 “I heard gun shots. All hell broke loose,” he recalled. “I can’t stress enough how much that night got out of control.”
One protester was shot and killed by someone and a police officer was injured.
Locke saw people break into businesses. He saw police toss tear gas and flash bangs into the crowd.

cash register (or it used to be) #cltriot

“It brings back a lot of emotions. Confusion and pain are probably amongst the two strongest,” he said. “There was so much pain and hurt on display that night. The whole city was on edge. I’ll never forget those moments.”
Locke wishes things hadn’t ended the way they did that night.
“To be clear, these were two separate events: a peaceful protest that created a difficult and real conversation around race relations, police violence, and big societal problems. And an ugly, unorganized, and violent-turned-deadly riot that undermined the earlier protest.”
Back to top

Sanjay Patel is a project manager for a biotech firm who lives in Satellite Beach, Florida. That’s a good 2,000 miles away from Cannon Ball, South Dakota, where thousands of protesters stood this year with the Standing Rock Sioux tribe and against a proposed pipeline.
Patel and his wife flew there three times. They had to, he says: “Our Native American brothers and sisters had put a call out for people to come stand alongside them in their fight for sovereignty and clean water. As Martin Luther King once said, ‘Injustice anywhere is a threat to justice everywhere.'”
They were there December 5 when the tribe won a small victory, when the Army Corp of Engineers announced it would look for an alternate route for the Dakota Access Pipeline — one that wouldn’t burrow through sacred ground.
But the moment that sticks out in Patel’s mind is from a month earlier — November 6.
A group of protesters defied police warnings and tried to canoe across a small river to Turtle Island, a sacred Sioux burial site. Police didn’t want that, since the island is part of the construction site. Cops and protesters met. Tear gas flew.
“The water protectors were not dissuaded and eventually began approaching the top of the hill where they were met with more teargas canisters being thrown at them,” he said. “After a few tense hours, the water protectors left the scene and no one was arrested that day.”
Demonstrations against the pipeline spread, past North Dakota and across the nation. Activists united, through pickets and petitions.
“Looking back at my and many others’ Facebook live videos from Standing Rock, they evoke for me much sadness and anger,” Sanjay said.
His wife, Stacey, feels the same way. But she says she prefers to nurse a different emotion: The love she felt people had for each other at the site.
“It was profoundly moving to watch a group of people attempting to pray at the graves of their ancestors only to be sprayed with tear gas. I was in awe at their determination and fierce love for their ancestors and shocked by the lengths to which the state would go to stop them from praying.”
The Patels plan to continue to join peaceful movements around Florida and the US.
“Another takeaway I had was that not only are we going to have to truly come together in order to fight for justice, it is also possible to do so,” Patel said. “Nearly 300 Native American nations have come together at Standing Rock, some of these nations have been sworn enemies, and they are all standing in solidarity now — this is unprecedented in history.”
Back to top

For Dalina Aime Perdomo, this election year was the most significant. It was her first time voting since her move from Puerto Rico.
“My parents who live in Puerto Rico have never been able to vote for the president,” she said. 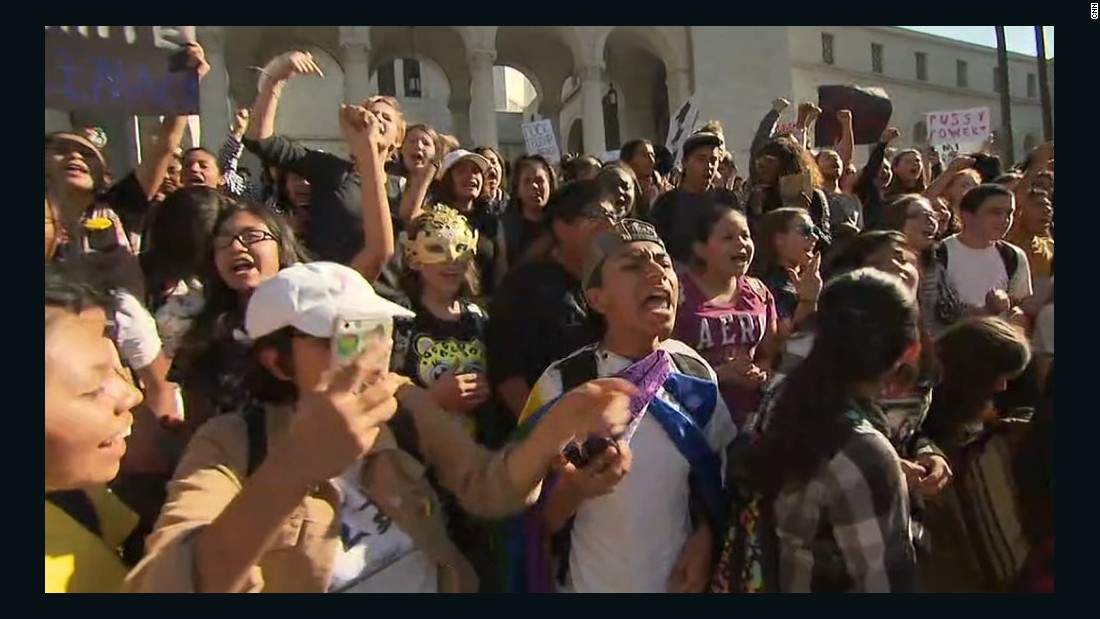 People across the US protest Trump’s victory

When the results came in, the teaching assistant joined other college students as they marched through the streets of Iowa City. They, like many across the country, chanted ‘Not my president’ and ‘Love Trumps hate.’
“At first, when we met up, it was emotional with an air of disappointment,” Perdomo said. “When we started marching it was unified, determined, peaceful.”
She recalls Trump supporters yelling slurs as they passed by, but that didn’t stop them from marching through the city for three hours.
“When people were cheering us on and giving us high five from cars, everyone was excited and happy,” she said.
Her most memorable moment was when they briefly blocked I-80, a major highway in the area.
“I feel proud that students at my school feel so strongly for fighting for what they think is right, and I am glad I was a part of it,” she said.

“While the protest might not have changed much, I feel now that lack of action is even more ineffective in and of itself, and at the very least we can always make a statement,” Perdomo said.
Back to top