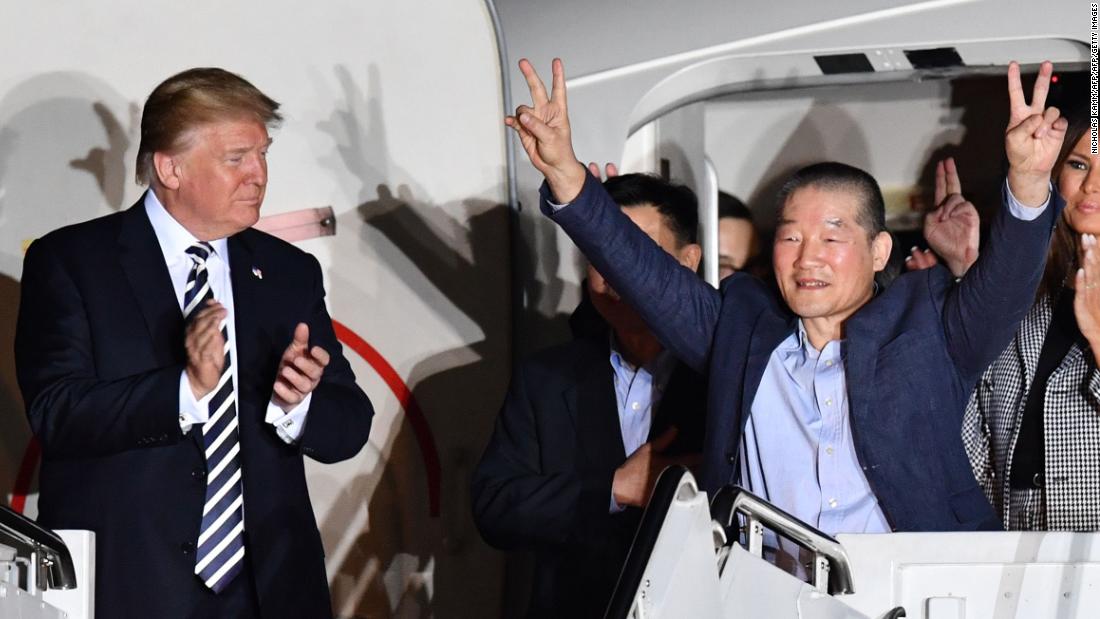 (CNN)In the very early hours of Thursday morning, President Donald Trump traveled to Andrews Air Force Base in order to personally greet the three American prisoners released by North Korea as they landed back in the United States.

But even in this most traditional of presidential photo ops/credit takings, Trump found a way to reveal just how different he is than anyone who has held the office before him.
As he wrapped up his brief remarks beside the three former prisoners, Trump said this (bolding is mine):
“I want to thank you all. It’s very early in the morning. I think you probably broke the all time in history television rating for three o’clock in the morning. That I would say.”
It is 3 a.m. Trump is standing beside a trio of men who have been held captive in an authoritarian regime for months and, in some cases, years. And he talks about how many people must be watching on TV.
It’s a reminder of just how much reality TV — and TV more generally — serves as the most useful lens through which to look when you are trying to understand the Trump presidency.
All modern presidents have been aware that their every movement and pronouncement is being recorded, played back and analyzed to death. None — not one — have consumed more of the coverage of themselves than Trump. Television is his near-constant companion — he uses it to get policy ideas, to judge how his presidency is playing and even to find new enemies to attack.
To Trump, good ratings mean success. It’s that simple. If people are watching you, you are winning. It’s a uniquely reality TV way of thinking — and one that would fit comfortably as a life mantra for, say, Kim Kardashian or Jake Paul.
Failure is not having people judge you poorly. Failure is not being interesting enough to have them judge you.
Trump’s obsessions with ratings is nothing new; a search through the invaluable Trump Twitter Archive produces 263 separate tweets in which he mentions the word “ratings.”
As far back as May 2010, Trump was tweeting about his great ratings: “The ratings for the Celebrity Apprentice were fantastic and everyone had a great time. It was a terrific season — congrats to everyone!”
And even when he transformed from reality TV star to presidential candidate, Trump’s focus on ratings never wavered.
“Congratulations to @seanhannity on his tremendous increase in television ratings,” Trump tweeted in May 2016. “Speaking of ratings- I will be on his show tonight @ 10pE.”
Some expected Trump to change — or act more presidential — when he became, um, President. Nope!
“Wow, television ratings just out: 31 million people watched the Inauguration, 11 million more than the very good ratings from 4 years ago,” Trump tweeted two days after becoming President.
What’s remarkable about all of this is that Trump doesn’t seem to distinguish between talking about ratings for a TV show, ratings for his inauguration or ratings for the arrival of former prisoners of the North Korean regime.
It’s all ratings to him. And good ratings are something to be proud of, to talk about. People are interested in you, he was telling the three newly-released prisoners. There’s a lot of good buzz out there about you! You are going to do great!
That is Trump. He sees himself only as people see him. If people are interested in him — and ratings are how he judges that — then he must be doing something right.
Don’t overthink it. It’s that simple.