Elizabeth Warren fielded the most attacks given her frontrunner status – but did she win the night? 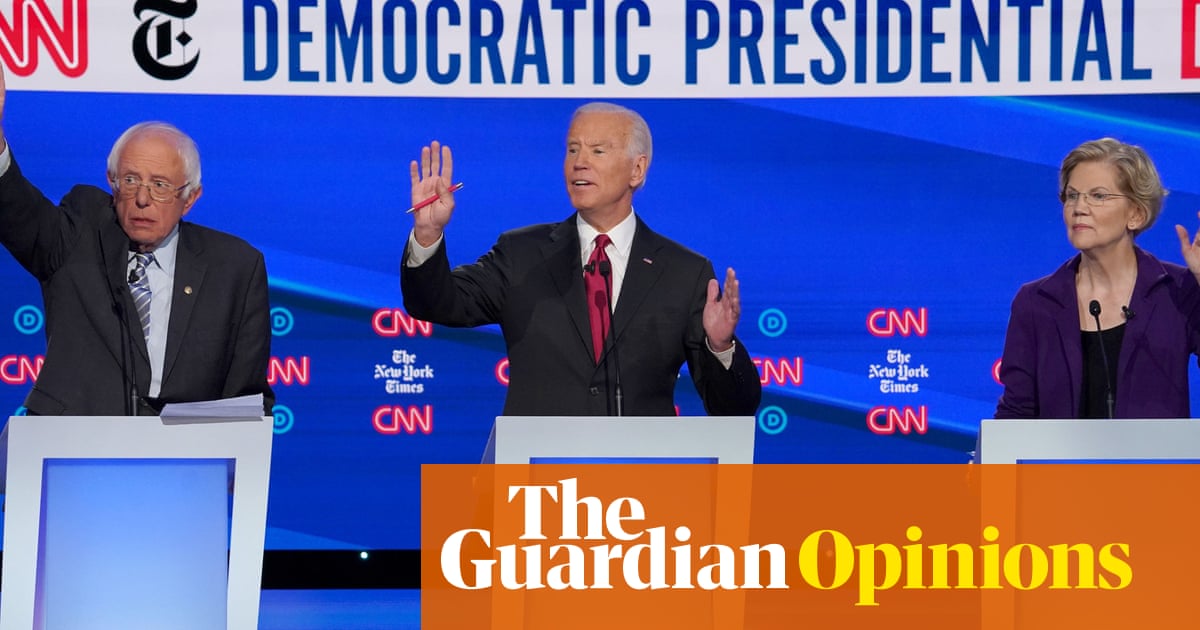 Arwa Mahdawi: ‘Warren is the frontrunner and Sanders was on fire’

Tuesday’s crammed stage meant real debate was impossible and, with the exception of a few heated disagreements, it was basically a conga line of predictable soundbites. Indeed, by the end of the night Anderson Cooper gave up any attempt at real substance and rounded things off with a question about “your most unexpected friend”. Think I had that as a homework assignment when I was 12.

Perhaps the clearest takeaway of the night is that Elizabeth Warren is now the frontrunner. She spent the evening on the defensive as the rest of the candidates took swipes at her. While she displayed extraordinary restraint in the face of some excruciating mansplaining (Beto O’Rourke calling her “punitive” felt like a politer version of “nasty woman”) it wasn’t her strongest performance. She made it too easy for Republicans to call her evasive when it comes to healthcare costs. Warren needs to find a better way to explain that Medicare for All is the most equitable solution, even if taxes are raised.

I don’t know what meds Bernie Sanders is on, but I’d like some myself. It’s hard to believe he recently had a heart attack; he was bursting with energy, and challenging other Dems to find the guts to stand up to the insurance companies. While Bernie Sanders was on fire Joe Biden seemed rattled; his performance was “expedentially” worse.

Jessa Crispin: ‘The single-digit candidates are getting restless’

The single-digit candidates are getting restless. Those polling below 5% are sensing the end of their campaigns, without even the dignity of a cabinet position on the horizon. They – among them Beto O’Rourke, Amy Klobuchar, Pete Buttigieg, Tulsi Gabbard and the six-foot-tall rabbit that escaped from its medical laboratory by wearing the billionaire Tom Steyer’s skin – are grasping for a few more percentage points, and they’re trying to wrestle them one by one away from Elizabeth Warren.

Now that Warren is ahead of Joe Biden in the polls, as the former vice-president continues his campaign to make each and every American voter deeply uncomfortable, she was the expected new target on the debate stage. The question was, are her opponents going to say something new, innovate their language and their positions, and create a new vision for America and a broken Democratic party, or are they just going to say the same old things in a louder voice. Guess which one they all chose!

If only the positions they took and the punches they threw at Warren made any sense. Here was Kamala Harris adamantly insisting Warren take the bold position of … deleting Trump’s Twitter account. Here was Gabbard glitching in her new fascist Stepford mode, repeating the term “regime change war” with regards to American intervention in Syria more than 10 times in a few minutes. Here was Klobuchar freaking out about Russia, at least half a dozen scandals behind the times.

These things are an endurance test, for us the voters as we crawl to the first primaries and to these candidates. Warren easily shrugged off her attackers, dooming them to languish in the shallow end of the polls until they run out of other people’s money. None of this makes me feel like we have any idea of how actually to defeat Trump. But it was very nice to see Bernie Sanders healthy, smiling and still calling for revolution.

Elizabeth Warren won the night. She was targeted as an emerging frontrunner, but held her own. When Kamala Harris demanded that Warren ask Twitter to shut down Donald Trump’s account, she focused on breaking up big tech instead. When Pete Buttigieg claimed that she was evasive about raising taxes on the middle class, she answered carefully about lowering medical costs instead of increasing taxes.

Bernie was a strong second. People counted him out after a heart attack, yet he debated tonight with clarity, humor and more affection that previously seen on national stages. Using the war in Iraq and the bailout, he vigorously reminded Joe Biden that the former vice-president accomplished more than just the Violence Against Women Act while in office, which silenced Biden.

Harris started out quoting Maya Angelou, saying that when people show you who they are the first time, believe them. The irony is that Kamala constantly defends her prosecution record that came down on poor black people in California. Maybe the tides have turned: she called for an end to mass incarceration while calling for a new war on drugs … for pharmaceutical company employees.

Julián Castro was the only person to bring up police violence and Atatiana Jefferson’s murder. Cory Booker made his signature moves: kumbaya interventions and stories about the housing projects that he lived in to develop talking points for political debates. Biden offered little more than some version of “I can beat Trump. Come on guys, remember Obama?”

The biggest loser was the length of the debate. Three hours is too long, and Americans are ready for fewer presidential hopefuls on stage.

Art Cullen: ‘Sanders was the highlight and Warren brushes off attacks’

Joe Biden, Elizabeth Warren and Bernie Sanders did nothing to hurt themselves. Nobody attacked Biden on stage – the attack ads during debate breaks were vicious toward Biden. Warren was the target for blows tonight over Medicare for All. They said she was “vague” about taxing to pay for it. Is that the best they could bring? She brushed them off as blanching for billionaires and shrinking from the moment.

Sanders was the highlight, talking about the healthcare industry driving little people bankrupt: “I would like to see the Democratic party have the guts to stand up,” he declared, full of vim and vigor after a heart attack.

Pete Buttigieg is running just behind those three, is popular in Iowa and could make a move before the first-in-the-nation caucuses. He showed depth on the Middle East, talked straight on how the rust belt got left behind and voted for Trump, and sounded smart and grounded. Klobuchar stayed in the conversation

Elizabeth Warren dominated Tuesday’s debate but the senator did herself no favors. Warren dodged the issue of who will foot the bill for turning the US healthcare system on its head.

Pressed on whether her version of Medicare for All would lead to a tax hike on Americans making less than $250,000, Warren refused to give a straight answer. The question isn’t disappearing. Prediction: Warren’s performance will be the stuff of Republican attack ads if she emerges as Trump’s challenger.

It was left to Joe Biden to crystalize the challenge facing America: “We have an erratic, crazy president who knows not a damn thing about foreign policy and operates out of fear for his own re-election.”

Biden also showed respect for our institutions as he declined to back a court-packing scheme. Revolutions are exhausting, the wheel turns. At times, Biden seemed ill at ease but on what counts most he said it best.