The Obama administration unveiled a long-awaited plan to combat the growing threat of multidrug-resistant tuberculosis, a deadly strain of the number one infectious killer in the world.

While tuberculosis advocates are thrilled with the ambitious scope and potential unifying force-out of the National Action Plan, many worry whether the funds will be made available to implement it.

The plan is the first from the White House to address the global threat of MDR-TB, the more deadly strain of tuberculosis that develops after inappropriate TB treatment, head on. It recommends that the U.S. better track and identify the disease, boost international capabilities to fight it, and develop new narcotic regimen and vaccines.

“TB has been one of those issues that has been neglected historically by the global health community, ” told Eric Goosby, the U.N. special envoy on tuberculosis. “I’m very complimentary of the administration to feature MDR as security threats that it is.”

Tuberculosis kills over 4,100 people a day, and the World Health Organization announced in its 2015 Global Tuberculosis Report this fall that it had overtaken HIV/ AIDS as the most deadly infectious disease. Experts worry that the continued spread of MDR-TB could increase exponentially in the coming years.

Over 480,000 people worldwide are estimated to have developed MDR-TB this year, and the disease has about a 50 percent remedy rate, if treated. Over 75 million additional people could lose their lives to MDR-TB in the next 35 years, calculates a recent United Kingdom report. While there are only a hundred or so cases of MDR-TB currently in the United States, the airborne nature of the disease and its growing presence around the world adds up to a global health threat.

“TB anywhere is TB everywhere, and we really need to look at how to reduce the risk both domestically and globally of MDR-TB … acknowledging if we don’t act now, it will get worse, ” told Dr. Rebecca Martin, the acting director of the Center for Global Health at the Center for Disease Control and Prevention. “What this plan affords us is actually an opportunity across the U.S. government to promote the coordination of U.S. government resources both in our domestic and global efforts.”

For more on MDR-TB, read this special report from The Huffington Post .~ ATAGEND

The White House’s proposal to deal with the disease is ambitious, with a call to “initiate treatment for 25 percent of patients with MDR-TB in 10 countries with the highest burdens of MDR-TB” by the end of 2016 alone. The National Action Plan would require early check-ins with the secretary of state, the secretary of health and human services, the administrator of the U.S. Agency for International Development and heads of other relevant departments over the plan’s five-year span, which ends in 2020.

The plan aims to treat 200,000 additional MDR-TB patients, on top of the 360,000 additional patients who are already accounted for in the U.S. Government Global TB Strategy 2015-2019, which is a separate plan. Treating these additional 560,000 patients in the 10 countries with the highest burden of MDR-TB would most likely include working more extensively with China, Russia and India. 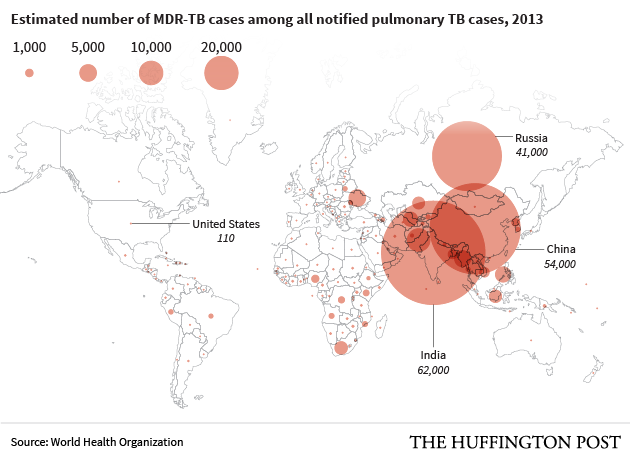 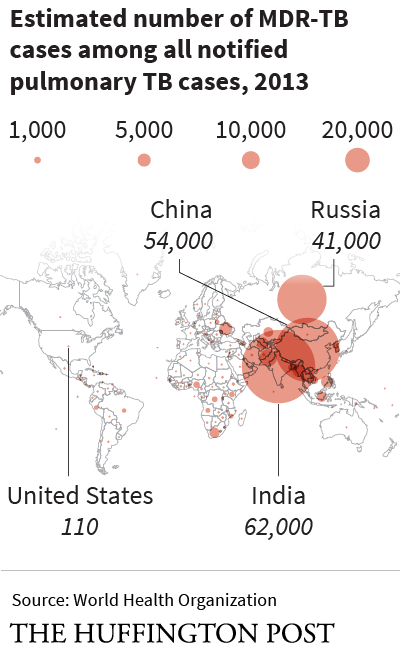 Achieving these goals will depend on the ability to mobilize funds from the private and public sector. The plan notes that its ultimate success is likely to be “subject to budgetary constraints and other acceptances, including the weighing of priorities and available resources by the Administration in formulating its annual budget and by Congress in legislating appropriations.”

Funding would need to be increased by at least $112 million in the next year to hit the National Action Plan’s ambitious targets, according to David Bryden, a tuberculosis advocacy officer for Results, a nonprofit advocacy group.

Prior to the release of the plan, the Obama administration had proposed cutting USAID’sTB funding by virtually 20 percent over the last three years, though Congress stopped it.

Two similar action plans on MDR-TB, released by the CDC in 1992and 2009, laid out very similar objectives for prevention and research — but they never got the funding to get off the ground.

Yet Dr. Anthony Fauci, the director for the National Institute of Allergy and Infectious Disease, believes the unifying call of the plan will help make funding for tuberculosis a higher priority at the National Institutes of Health, USAID, CDC and other U.S. agencies. “That’s what you’ll likely consider across agencies, the prioritization of this, ” he told. “I think we’ll be able to implement the national action plan.”

Fauci said the plan could set a global example. “It’s … an effort to mobilize the political will and additional financial in-kind commitments from other donors — bilateral, multilateral donors, private sector partners, the governments from the affected countries. So one of the positive spinoffs is to … galvanize the will and the political commitments of others to focus on latching onto this plan.”

“This bold move by the United States, I hope it’s followed … by a similar type of stance and bold moves by other European countries, ” Raviglione told. “Especially in Europe, people are simply overlook the fact that MDR-TB is at the border.”

For Joanne Carter, the executive director of Results, the plan could become not only two examples for other countries, but a model of ambition in dealing with this global health crisis.

“We see it as a really important Christmas present. We’re genuinely, honestly, just happy[ it came out] … in advance of final revisions of the 2017 budget.”

Sen. Chris Murphy makes convincing case that voting out Democrats is the key to reducing shootings