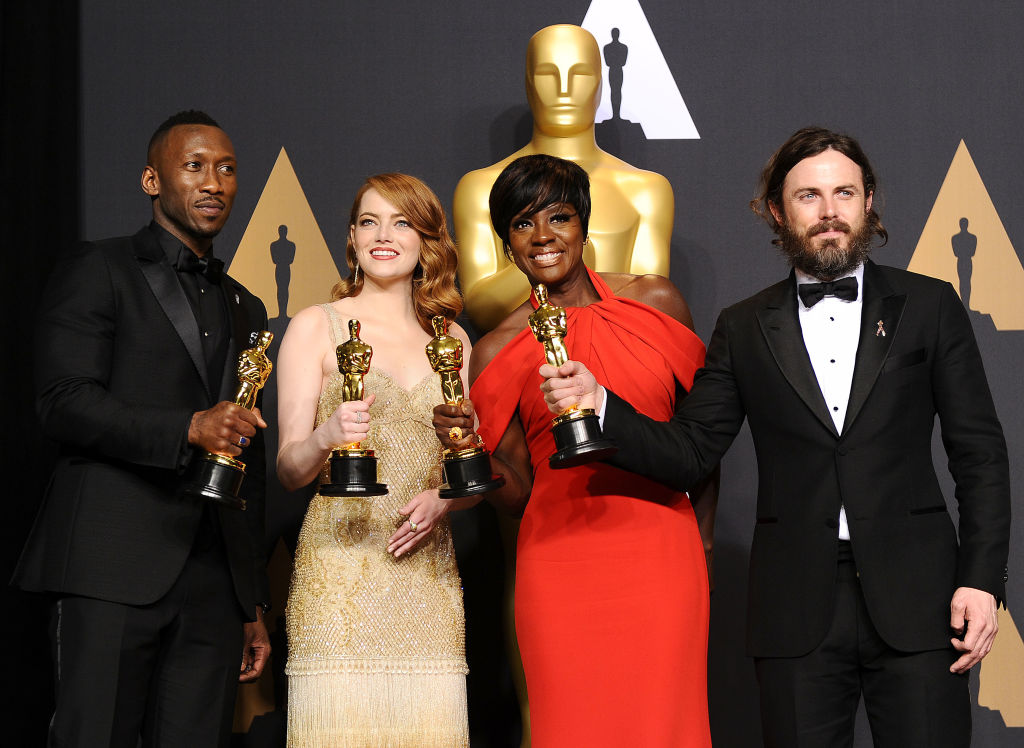 And the award for the most drawn-out, mother-effing awards presentation of the year goes to…The Oscars! Here in New York, the show didn’t end until like 12:30 am and if you decided to cut out early so you could make it to work this morning, you made the mistake of the century.

Warren Beatty and Faye Dunaway were up way past their bedtimes, got mad confused, and told the world that won best picture instead of . As big of a fuckup as the intern who handed them the wrong card made, if the actual winner had been and was mistakenly announced, shit would’ve hit the fan. #Oscarssoconfused. If you don’t know who Warren Beatty and Faye Dunaway are, join the club. But since it’s social suicide to not recognize Hollywood legends, we all had to pretend to be excited by their appearance and forgive them for their senile inability to realize that Emma Stone couldn’t possibly be the name of the best picture winner.

OK, back to the beginning of the night. We started out with Justin Timberlake singing that song that your mom loves and will definitely request for her candle at your sister’s bat mitzvah candlelighting. Still, I would watch Justin sing and dance to whale sounds, so this performance is decent. Nice to see him in a tux all “Suit and Tie” style like it’s 2013.

Jimmy Fall… Oh shit, no, Jimmy Kimmel is hosting. How long does Kimmel talk before the speech gets weirdly political and Twitter freaks out? Oh, um, yes, somewhat immediately. I’m glad he popped off the topic pretty quickly in order to rip on Matt Damon and every other person in the room.

Was anyone else surprised at how mild and not-super-political the whole night was? I really wanted someone to roll up in a Fuck Trump T-shirt under their tux or something. Even the speeches were super basic. Like, hey, support the arts, love one another. Praising the Academy, your agent, and your second husband in your Oscars acceptance speech? Groundbreaking. Unless you count Viola Davis’ bomb-ass speech telling all the stories of dead people. Dear God I love that woman.

Okay, so John Legend has the voice of an angel and is a great performer and did a v artistic rendition of that boring little number that everyone pretended to love but is mad underwhelming. But there’s something I need to say and it’s that I’m getting a little fucking sick of this whole John Legend/Chrissy Teigen perfection thing. Like, okay we get it. You get along. You’re affectionate and like each other and both are fucking adorable. You even have an adorable baby. But it’s enough, we need a new routine. You know what I’d like to see? Just ONE Oscars ceremony where instead of being all over each other, John and Chrissy get in a screaming match because John continuously leaves the toilet seat up or Chrissy’s cookbook filled with extremely fried and cheesy foods are starting to give John gas. Now that would be a dose of reality, people.

.@violadavis gives #Oscars acceptance speech: Artists “the only profession that celebrate what it means to live a life” pic.twitter.com/6saH17l0di

Okay, let’s get started with the awards and something we sort of have an interest in: famous people in a supporting role. I need to ask you a real question, though. Did people actually watch this live? I have the DVR power to skip through boring-ass acceptance speeches for movies I didn’t see nor care about, but some of you wasted your precious time watching every fucking second of this Hollywood circle-jerk. Good for you. Wow.

Alicia Vikander won an award last year and is back to present Best Supporting Actor. She looks thin AF and super tan like a Swedish Marissa Cooper with a less depressing fate. Good for Vikander and her messy bun that coincidentally looked like the 3-day unwashed hair look I was sporting while watching her from my couch. Mahershala Ali wins for his role in , which I was totally planning on seeing, but I haven’t carved out a day to be depressed yet.

How hilarious is it that won an Oscar at all, even if it was for Best Makeup or whatever. Sorry, Kylie LipKit, I guess this is just not your year in the makeup category. No, but really, I thought would only ever claim the title of “Least Shitty Will Smith Movie In The Past 6 Years.” Not that it’s a great movie, just all of his other movies have been THAT bad.

Fuck, they brought out Chris Evans for the Sound Editing and Sound Mixing categories. It’s like the producers of the Oscars knew these categories were throw-aways and the time where everyone gets up to pee so they brought out Evans to keep our eyes on screen for a minute. Clever.

Also, Vince Vaughn looks actually better than he’s ever looked before. Like, he’s seriously giving some Jon Hamm vibes and the world could use more Hamm vibes. What is he on stage for right now? IDFK. Oh right, some war movie that Mel Gibson directed that your boyfriend will think seriously about viewing but never actually see. Speaking of Mel…

Every time I see Mel Gibson at an awards ceremony I feel like he snuck in. #Oscars

Let’s talk about the award for Best Animaed SHORT Film. Like, seriously who the fuck has seen any of these things? How do they possibly make any money? Where do they even show them? At first I was like, they’re probably sold as education tools for children to schools or museums and shit, but then you notice that one of the titles is and realize that is definitely not the case.

How amaze does Hailee Steinfield look. Seriously though. She looks glowing and magnificent and also age appropriate. What is she, like, 18? Damn girl.

She’s presenting in the Animated categories. At this point, you’re just rooting for shit you’ve seen because then you can feel superior when someone brings it up at work. Thank God won, amiright? Now at least you’ve seen one of these damn films. is bomb though.

Real talk, I’m actually really intrigued by the bit with the tour bus people. This might actually be the best part of the Oscars as a whole. Real people losing their shit in front of a million celebrities is so entertaining. What’s even better is real people ignoring certain celebrities. At the same time though, Jimmy Kimmel, this is the Oscars and not your personal late night show. Don’t have people in oversized Gap sweatshirts force Denzel Washington to pretend he doesn’t hate being touched. Have some respect. 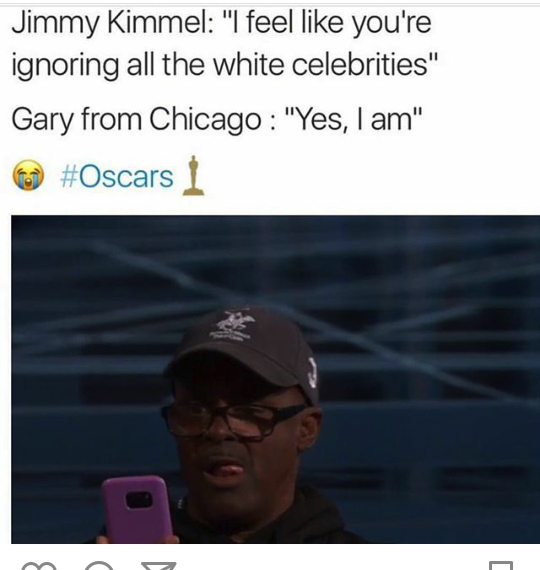 Did you ever think Ben Affleck and Matt Damon could look so damn old? Boys, you have millions of dollars and Just for Men Gel is probably six bucks at CVS. Buy some and quit reminding all of us that we, too, are getting old as shit. Also, shave your fucking beard Casey, you’re an Academy Award winning actor now and people might stop referring to you as Ben’s little bro. Stop sporting facial hair that looks like you just finished a three day acid trip at Burning Man

Side note, I miss Leo. Is it really the Oscars without DiCaprio? No. I care significantly less about this without him in the audience. OMMMMMGGGGGeeeee. Just like that, my wish is granted. I think I just peed a little. Leo is everything. He makes it all worth it. Thank you, Leo.

Emma Stone wins for Best Actress, which I think came as a surprise to exactly no one. She’s been cleaning up at awards shows all season. Her speech was vanilla, which is appropriate because she looks exactly like a vanilla soft-serve frozen yogurt with a cherry on top served in a waffle cone in that dress. I really wish she would have had the costume people dress her because she was way more interesting in that movie than she is getting an award for that movie.

Drumroll on best picture…. . BECAUSE OF COURSE IT DID. Why is Ryan Gosling acting so fucking weird. Like, his movie just won best movie of the year and he’s standing off to the side of the stage like a goth kid in a class production of .

What in the Steve Harvey.

really won the Best Picture?! What a world. OK, that moment actually made it worth watching this whole damn thing.

Wow. I’m super glad I got to see that happen live too because I did that thing where I skipped through so much of the recording I caught up to live TV. God works in mysterious ways. Until next year, y’all.