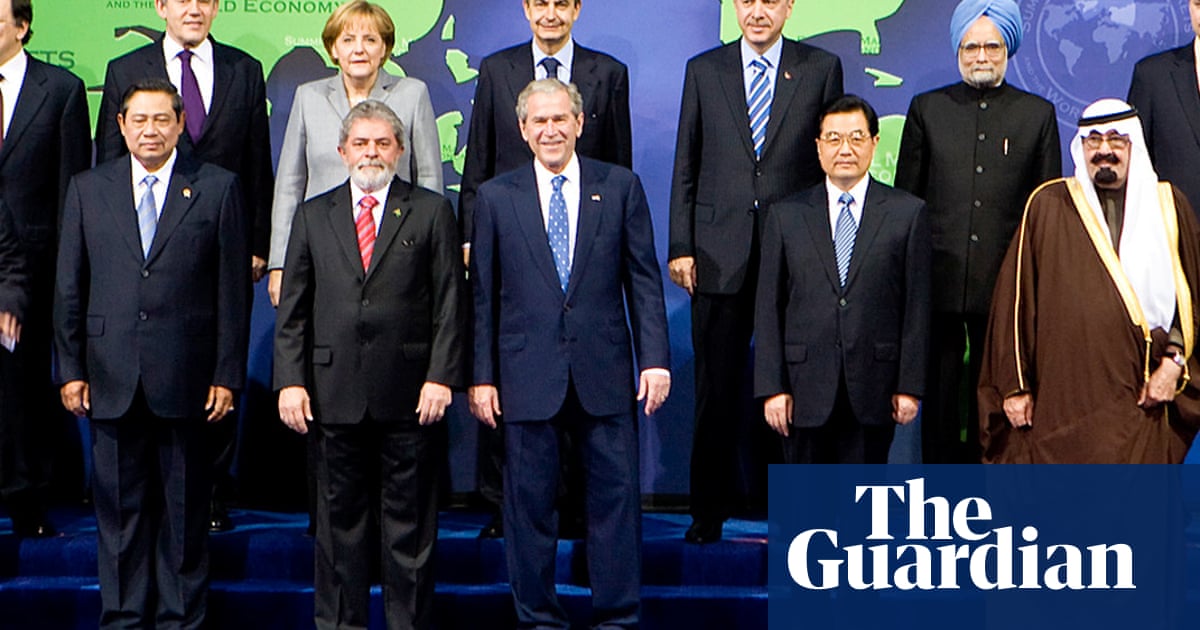 In the wake of the collapse of Lehman Brothers in 2008 the G20 called an emergency meeting in Washington in a bid to contain the fallout from the mounting financial crisis. In the decade since each nation represented has had diverging fortunes.

Of the world leaders who attended the summit, only two are still in position today – Angela Merkel and Recep Tayyip Erdoğan. One is in prison and four others have become embroiled in corruption charges. Here we look at the global ramifications of the crash for those present and the countries or organisations they represented.

Gabriel Sterne, head of global macro research at the consultancy Oxford Economics, said: “It’s the divergence across economies that is so striking. GDP did not even shrink in several Asian economies [compared to Europe]. Spain only surpassed the pre-crisis peak last year, Italy has not done so yet, and as for Greece … don’t even mention Greece!”

Silvio Berlusconi (Italy)
The eurozone’s third largest nation is the only nation at the G20 where the economy remains smaller than before the financial crisis. It has had a decade of sluggish recovery marred by continuing concerns about the stability of its banks and political unrest.

Berlusconi resigned in 2011 at the height of the eurozone sovereign debt crisis, and there have been five prime ministers since. Berlusconi made a comeback in politics last year, after a conviction for tax fraud, sex scandals and heart surgery.

José Manuel Barroso (European commission)
The head of the European commission had to fight to keep the eurozone together in the face of the sovereign debt crisis across the single currency bloc. He stepped down in 2014 – and then controversially took a position with US investment bank Goldman Sachs.

Gordon Brown (UK)
Key to forming the G20 and orchestrating the international response to Lehman’s bankruptcy, Brown hosted the April 2009 London summit after the first meeting in Washington.

Brown lost Labour’s majority at the 2010 election and was replaced by David Cameron’s Conservatives in coalition with the Liberal Democrats. The Tories used the banking crash to their advantage, blaming the recession and ballooning UK budget deficit on profligate Labour spending and lax regulation. Brown quit as party leader, and stood down from parliament in 2015.

The UK flirted with double-dip recession as the coalition imposed austerity to cut the deficit, rather than stimulating the economy – which some economists blame for the slow pace of recovery from the crash. Britain was one of the slowest nations in the G20 to return GDP back to pre-crisis levels. Workers’ pay is still below its pre-Lehman peak.

Angela Merkel (Germany)
The longest-serving head of government in the EU and de-facto leader of the bloc is the only G20 leader in the same position a decade after Lehman. She has faced sharp criticism for promoting austerity measures and for the tough conditions attached to the Greek bailout.

José Luis Rodríguez Zapatero (Spain)
Spain is not a formal member of the G20 but has “permanent guest” status, despite having the sixth-largest economy in Europe.

The eurozone sovereign debt crisis, a property market crash and Spain’s inability to save its banks without EU support triggered recession, extreme levels of unemployment and the use of austerity measures.

Recep Tayyip Erdoğan (Turkey)
Alongside Merkel, the Turkish political strongman is one of few from the Washington meeting still in power. He became president in 2014, and scrapped his former post of prime minister after a referendum this year. He survived a coup attempt in 2016 and cracked down on opponents.

Turkey has been one of the best-performing economies in the G20, yet much was underpinned by increasing debt levels. The country now faces an unfolding economic crisis from a plunging currency and rising borrowing costs.

Manmohan Singh (India)
India has one of the fastest growing economies in the world, propelled by rapid population growth, increasing urbanisation and hi-tech industrial development.

Manhoman Singh, an economist, served as prime minister until 2014 when his Congress party was defeated by Narendra Modi’s Hindu nationalist Bharatiya Janata party.

Harper’s conservatives were defeated by Justin Trudeau’s liberal party in 2015.

Kevin Rudd (Australia)
The only developed nation from the G20 where there was no recession following the demise of Lehman Brothers, Australia was insulated by its position as a commodity exporter to fast-growing China.

Kevin Rudd was deposed by his deputy, Julia Gillard, in 2010. Rudd then replaced Gillard in 2013 but lost an election three months later to Tony Abbott’s liberals. Two more prime ministers have followed.

Taro Aso (Japan)
Still in power, but with a changed remit. Taro Aso was replaced by the democratic party’s Yukio Hatoyama in late 2009. When Shinzo Abe returned won power for his liberal democrats in 2012, he appointed Aso as deputy prime minister and minister of finance.

The Japanese economy has struggled with stagnation for decades, facing challenges from an aging population and the highest level of government debt in the world. Abe has used quantitative easing to try to stimulate growth.

Robert Zoellick (World Bank)
The World Bank – the institution charged with aiding developing nations – was at the meeting for fear the crisis would spill over to hit emerging markets, which was the case for some countries. Zoellick was replaced by Jim Yong Kim in 2012.

Dominique Strauss-Kahn (IMF)
Disgraced amid accusations of sexual assault against a hotel maid in New York, which were later settled out of court, Strauss-Kahn stood down from the IMF in 2011. He was replaced by Christine Lagarde. He also faced accusations of aggravated pimping, for which he was acquitted in 2015.

Jan Kees de Jager (Netherlands)
With a sizeable financial system, the Netherlands was a guest at the Washington meeting. The Dutch had to bail out ING bank and part of ABN Amro after its disastrous takeover by the UK’s RBS. De Jager attended in place of prime minister Jan Peter Balkenende, whose father had just died. He is now chief financial officer of telecoms company KPN.

Dmitry Medvedev (Russia)
Russia was hit by the financial crisis, although not as badly as some other G20 nations, and staged a sharp recovery until around 2014. The economy has since suffered amid US and European economic sanctions over its annexation of Crimea.

Medvedev had replaced Vladimir Putin as president in 2008 when Putin faced term limits. He then stood aside in 2012, allowing for Putin’s return. He is now the Russian prime minister.

Cristina Fernández de Kirchner (Argentina)
Argentina has had a difficult decade since the financial crisis, including a sovereign debt default in 2014. Kirchner was replaced by Mauricio Macri after elections in 2015 and is to face trial over an alleged cover-up of Iranian involvement in the bombing of a Jewish community centre.

Argentina meanwhile faces a new economic crisis from a falling currency and high debt levels. It has asked for $50bn in emergency support from the International Monetary Fund.

Felipe Calderón (Mexico)
Calderón took office around the start of the Mexican drug war in 2006, which is ongoing. The country experienced a sharp downturn after the financial crisis, before staging a robust recovery. He stood down in 2012, replaced by Enrique Peña Nieto.

Mexico faces challenges from Donald Trump imposing import tariffs and pushing US firms to move more jobs back to America.

Susilo Bambang Yudhoyono (Indonesia)
Relatively insulated from the crash, Indonesia was one of the few G20 countries that did not see its GDP fall following the collapse of Lehman. Yudhoyono stood down in 2014.

Indonesia now faces problems with a plunging currency and high levels of debt as emerging market economies around the world struggle with the stronger US dollar.

Luiz Lula da Silva (Brazil)
Imprisoned for corruption and money laundering for 12 years in April, Lula is among several of the G20 leaders marred by scandal in the decade since Lehman’s collapse. He was succeeded in 2011 by his former chief of staff, Dilma Rousseff, who was then impeached as the country lurched through accusations of corruption across politics.

The Brazilian economy has since performed poorly in the decade following the crash.

George W Bush (US)
Government support for the banking industry was anathema to the Republican president as Lehman was allowed to fail. Politicians around the world however quickly realised they could not ignore the panic it triggered, including Bush, who signed into law a $700bn bailout for the US banks in October 2008.

Barack Obama won the 2008 election, replacing Bush in January 2009 amid recession from the financial crash. Obama unleashed a stimulus package worth about $1.4tn in tax cuts, spending and other measures to avert a damaging and slow recovery from the crash.

Hu Jintao (China)
The strongest-performing economy in the G20 in the decade since the financial crisis, China saw rapid growth in the years immediately after the crash, with the growth rate peaking above 10% in 2010.

The period since has been focused on managing the gradual slowdown of the economy as it transitions towards becoming a developed market, with a greater focus on services. Hu was replaced by Xi Jinping in 2012.

However there are growing concerns over high levels of Chinese corporate debt, which some economists fear could trigger the next global financial crisis, as well as the threat of trade tariffs from Donald Trump.

King Abdullah (Saudi Arabia)
The oil-rich kingdom saw no drop in real GDP below its peak achieved before the financial crisis, amid continuing demand for natural resources in China, India and other emerging market economies. Abdullah died in 2015 and was succeeded by his half-brother Salman.

Nicolas Sarkozy (France)
Another G20 world leader tainted by corruption allegations in the past decade, Sarkozy was beaten by socialist François Hollande in the 2012 French elections. He faces charges for corruption and influence peddling, and investigations for donations from the late Libyan dictator Muammar Gaddafi – allegations he has said are “crazy”.

Lee Myung-bak (South Korea)
A former Hyundai executive nicknamed “the bulldozer”, he used typically Keynesian economic stimulus from a construction programme in 2009 to avert a worse recession. South Korea needed to provide loan guarantees to support its banking system and was hardest hit of the major Asian economies.

Lee was succeeded by Park Geun-hye in 2013. He was arrested on charges of bribery, embezzlement and tax evasion earlier this year.

Kgalema Motlanthe (South Africa)
South Africa fell into recession for the first time since the end of apartheid, even though the country was benefiting from a construction boom ahead of the 2010 World Cup, with the loss of millions of jobs.

Motlanthe was succeeded by Jacob Zuma in 2009. South Africa is still suffering from high unemployment, while the rand has fallen this year as emerging market nations come under pressure from the rising US dollar.