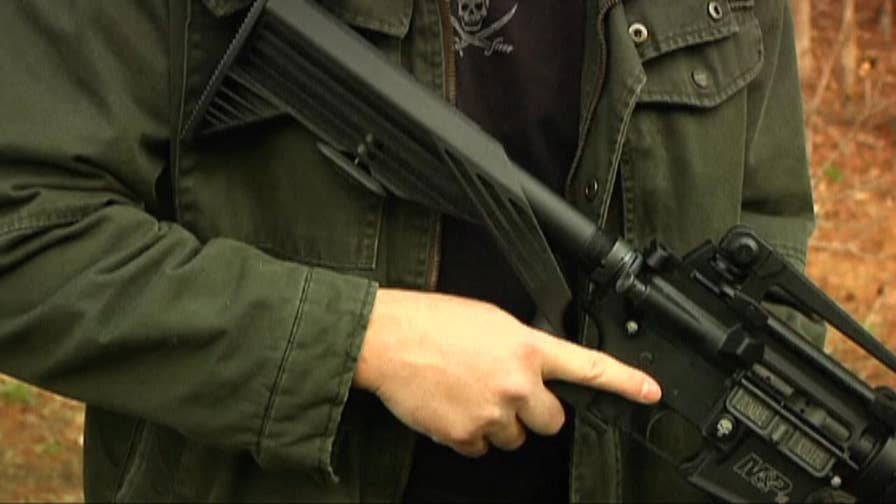 What are ‘bump stocks?’

Twelve bump stocks were found in the hotel room of the Las Vegas massacre shooter. Lawmakers, including some Republicans are concerned about their capabilities but what are they?

Days after yet another mass shooting sparked a nationwide debate on gun control and an immediate response from lawmakers, President Trump took action.

The president said he signed an order on Feb. 20 directing the Justice Department to ban “bump stocks” and other gun modifiers that make semi-automatic firearms fire faster.

“We must move past clichés and tired debates and focus on evidence-based solutions and security measures that actually work,” Trump said during a ceremony to honor the 17 victims of the shooting at Marjory Stoneman Douglas High School in Parkland, Florida.

A month later, Trump confirmed the Justice Department is forging ahead with his plan to ban rapid-fire bump stocks.

“Obama Administration legalized bump stocks. BAD IDEA. As I promised, today the Department of Justice will issue the rule banning BUMP STOCKS with a mandated comment period. We will BAN all devices that turn legal weapons into illegal machine guns,” he explained in a tweet on March 23.

Obama Administration legalized bump stocks. BAD IDEA. As I promised, today the Department of Justice will issue the rule banning BUMP STOCKS with a mandated comment period. We will BAN all devices that turn legal weapons into illegal machine guns.

Here’s what you need to know about bump stocks, the devices involved in last year’s Las Vegas shooting.

How do they work?

A bump stock is an attachment that allows a semi-automatic rifle to mimic a fully automatic weapon’s “cyclic firing rate to mimic nearly continuous automatic fire,” according to the Bureau of Alcohol, Tobacco, Firearms and Explosives (ATF).

Semi-automatic rifles with bump stocks could fire hundreds of rounds per minute, according to experts.

Yes. The ATF gave its seal of approval under the Obama administration in 2010.

At the time, the bureau concluded bump stocks didn’t convert a semi-automatic firearm into one that is fully automatic, meaning it was not equivalent to machine guns that are regulated under the National Firearms Act, which dates back to the 1930s.

Bump stocks are currently legal under federal law. However, it is illegal for U.S. citizens to own fully automatic firearms produced after May 19, 1986, The New York Times reported.

But since the deadly Las Vegas shooting, states and cities have increasingly pushed for legislation to ban the devices.

Massachusetts became the first state to pass legislation banning the device after the October incident. The state law, which went into effect Feb. 1, prohibits possession of the device under all circumstances. It also bans the possession of trigger cranks.

New Jersey, as well as large cities such as Denver and Columbia, South Carolina, also have enacted laws prohibiting the sale and possession of bump stocks.

The National Rifle Association (NRA) even called for an immediate review of bump stocks after the Vegas shooting.

“The NRA believes that devices designed to allow semi-automatic rifles to function like fully-automatic rifles should be subject to additional regulations,” the NRA said in a statement in October.

What other actions has Trump taken?

Trump assured Americans that something would be done about bump stocks very quickly.

“I’m writing that out myself. I don’t care if Congress does it or not,” he said on Feb. 26. “You put it into the machine gun category, which is what it is, it becomes, essentially, a machine gun, and nobody is going to be able to — it’s going to very hard to get them.”

The measure to fix the National Instant Criminal Background Check System (NICS) provides additional funding to agencies and states that comply with the system. Those that did not, would be penalized.

More than $2 billion is also allocated to train school officials and law enforcement officers to identify signs of potential threats. This money, would also be used to install metal detectors.

Another main action Trump has taken on guns has been to sign a resolution blocking an Obama-era background check rule designed to keep guns out of the hands of certain mentally disabled people.

Obama’s rule, which affected an estimated 75,000 people, required the Social Security Administration to forward to the Justice Department the names of certain disabled beneficiaries to be added to an FBI database of individuals ineligible to purchase a firearm.

Fox News’ Kaitlyn Schallhorn, Lucia I. Suarez Sang and The Associated Press contributed to this report.