Thousands are walking the 280 miles from Ankara to Istanbul to protest against a government crackdown on politicians, journalists and civil servants 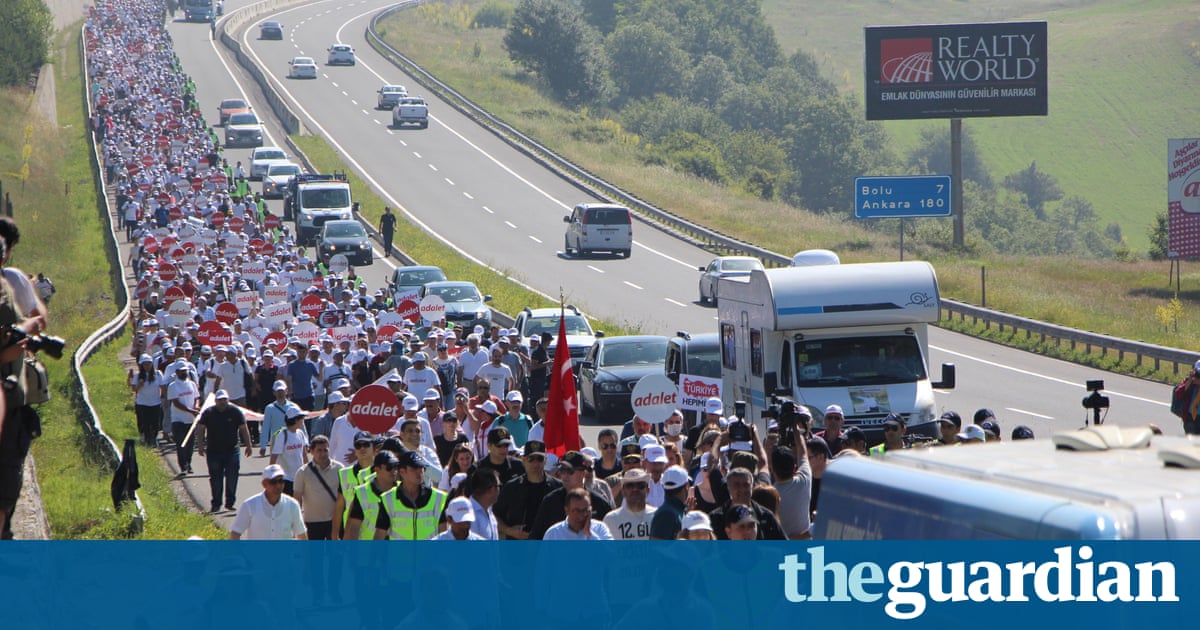 Hdr Aydur rested his blistered feet under the shade of a tree on the side of the highway that runs between Ankara and Istanbul. The 57-year-old, from Erzincan in Turkeys north-east, who has diabetes, had been marching for 15 days. He is one of thousands journeying by foot from Turkeys capital to its largest city, many carrying banners that say adalet or justice.

We lost democracy in our country, and we want it back, Aydur said, his shirt bearing the images of Nuriye Glmen and Semih zaka, two teachers who were jailed last month after more than 70 days on hunger strike over their arbitrarily dismissal in a government decree.

Tens of thousands of people have been dismissed or detained in a broad government crackdown in the aftermath of a coup attempt last July that left more than 250 people dead and 1,400 wounded. After declaring a state of emergency, the governments purge went beyond the direct perpetrators of the coup to encompass a large swathe of civil society, the political opposition, academics, journalists and civil servants, squandering a rare moment of unity to solidify its hold on power.

In April, President Recep Tayyip Erdoan narrowly won a referendum that vastly expanded his powers, while the countrys judiciary has been reshaped in his image, with a quarter of the nations judges and prosecutors dismissed or jailed over alleged connections to Fethullah Glen, an exiled preacher whose grassroots movement is widely believed in Turkey to have orchestrated the putsch.

Senior opposition politicians have also been imprisoned. Earlier this month Enis Berberolu, a lawmaker with the Peoples Republican party (CHP), was jailed for 25 years after leaking information to the press on Turkish intelligences transfer of weapons across the border to Syrian rebels.

That arrest sparked the Adalet march, a 280-mile (450-km) walk led by the CHPs chairman, Kemal Kldarolu, which set off from Ankara on 15 June. Organisers hope it will culminate in a large rally in Istanbuls Maltepe neighbourhood on 9 July. It has drawn supporters along the way from across Turkish society despite the scorching summer heat, as it covers nine miles a day.

The protesters, dismissed as Glen supporters by the government, have given a variety of reasons for their involvement: the countrys slide to authoritarianism, the authorities abuse of the state of emergency, the arrest of journalists and politicians, the crackdown on dissent, and even opposition to retirement laws.

Academics and teachers are being wrongfully dismissed, losing their jobs and food and theyre being deprived of their constitutional rights, say Aydur. The only thing left for them is to resist, and I wanted to give a voice to their resistance. We want independent courts, not one-man rule, and we want this justice for everyone including those on the opposite side.

The atmosphere on Thursday was relaxed, belying the deep fissures and polarisation that run through a nation yet to come to terms with the coup attempt.

A year ago hundreds of thousands of Turks gathered in Yenikap square in Istanbul to celebrate victory over the coup plotters. But the euphoria quickly turned to alarm and then despair in the weeks and months that followed.

There is a reign of fear, Kldarolu said in an interview conducted during the march. Journalists and citizens, the people, cannot speak. This is what we want to get rid of.

When the 15 July coup happened every party was against it, but on 20 July there was a civil coup and its main plotter was Erdoan, he said. The state of emergency gave him all the power, and with all the dismissals and investigations against thousands of academics and journalists and civil servants, there are ordinary citizens who cannot even talk to their lawyers. There is oppression against the opposition, and lawmakers are being arrested. This justice march is against this civil coup.

Many of Erdoans religiously conservative supporters look upon the countrys secular opposition as elitist White Turks who used to dominate the upper echelons of the state and oppress the poor. In their eyes Erdoans rise can be interpreted as a rebuke to the excesses of the elite.

Namik Akbas, a 32-year-old from Amasya who joined the march, said the Erdoan government was using religion to divide people.

Turkey has been ruled for a long time by this mentality of manipulating the public, he said. Adalet to me means unifying the country under secular, enlightened values. Secularism is not against religion.

For Borga Budak, a 36-year-old CHP member from Ankara sporting a Che Guevara cap, the march is an attempt to give succour to the Turkish oppositions cowed base.

The idea of this protest isnt geographical, Budak said. It doesnt stop in Istanbul. People need hope, and this walk gives them hope.