About 4,000 US truck drivers notified on Monday Celadon was ceasing operations, leaving them jobless and without benefits 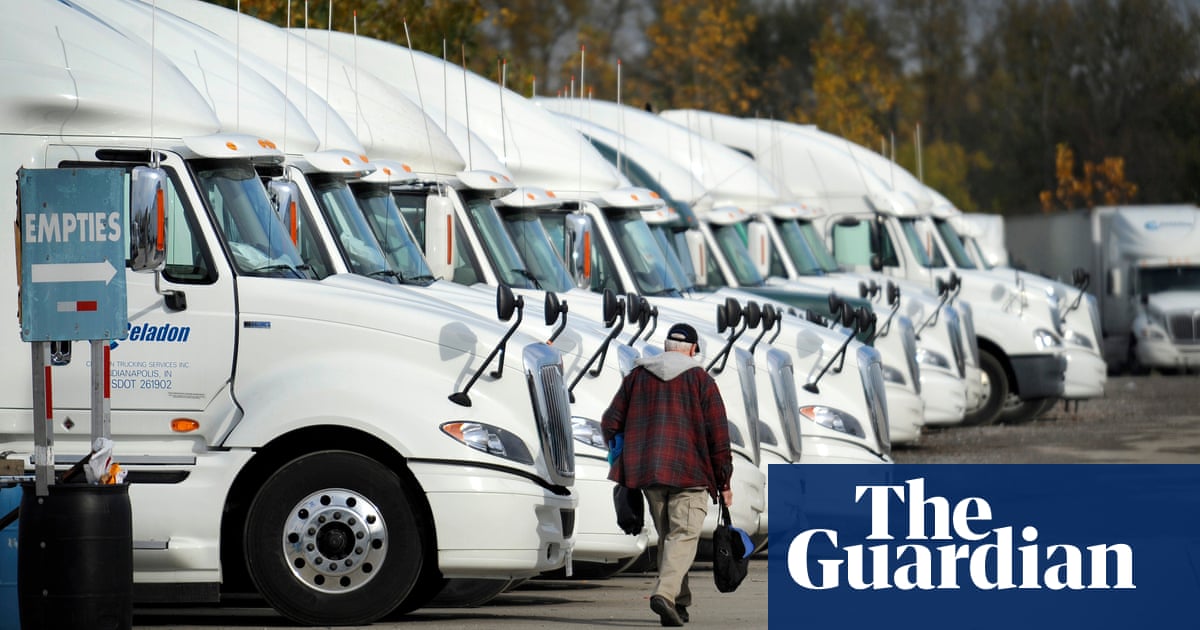 Andrea Smith has a daughter who turns eight on 20 December, five days before Christmas. Now the trucker’s birthday and Christmas plans have been thrown into disarray by the largest trucking firm bankruptcy in history.

“I’m not sure what’s going to happen or if I’ll get to be home if I’m able to find another job quickly. I’m crushed,” said Smith, a truck operator for Celadon, hours after it declared it was going out of business.

Smith is one of about 4,000 truck drivers across the US who were notified on Monday that their employer was ceasing operations after filing for chapter 11 bankruptcy protection. The filing makes it the largest bankruptcy in trucking history.

The logistics carrier, based in Indianapolis, reported annual revenues more than $1bn as recently as 2015. But a federal fraud investigation, huge debts and the “enormous challenges” in the industry, according to the chief executive, Paul Svindland, have forced the trucking company off the road.

Many of the truck drivers were left stranded in the midst of making deliveries, as they await receiving bus tickets from the company to return home, now jobless and left without benefits two weeks before Christmas. Their fuel cards were shut off, and many were reported left without any directions on where or how to turn in their rigs.

“We were lied to for months,” said Smith, who has worked for Celadon for a year. “We’ve been ignored, some stranded for days. I’ve still yet to hear from anyone at Celadon besides the message after midnight last night that was fleet-wide.”

Smith received the news about 50 miles away from her home in Centreville, Alabama. She explained the company asked her to drive her truck and leave it in Chattanooga, Tennessee, where she would receive a bus ticket back home, but she plans on leaving her truck at the Celadon terminal in Gadsden, Alabama.

Celadon has its own issues. The bankruptcy comes just days after Celadon’s former chief financial officer Bobby Lee Peavler and former chief operating officer Eric Meek were arrested and indicted on nine federal charges each involving a $60m fraud scheme, including conspiracy to commit wire and securities fraud and conspiracy to make false statements to the company’s accountants and falsify records. The company also has debts of $293m.

But Celadon’s collapse also comes at a difficult moment for the industry. Thousands of truckers have lost their job in 2019 as the freight market stalled and “spot” prices for shipping – those bought on the open market rather than as part of a contract – fell.

A slowdown in a variety of markets, including housing and autos, and the impact of the US’s trade wars have also contributed to the drop.

About 795 companies shutdown in the first three quarters of 2019, according to transportation industry data firm Broughton Capital, three times the total number of trucker failures for the same period in 2018.

“I don’t know if I have enough medication to make it through for 90 days,” said Riley. “Rumor has it we will get our final paycheck Friday. They owe me over $1,000, I don’t know if I’m going to get it or not. Honestly it’s just going to be cross your fingers and hope.”

Riley returned his truck to Celadon’s Indianapolis terminal on the morning of 9 December, where he said dozens of other drivers were left stranded, waiting to receive bus tickets to return home.

“We had no clue what was going on. Celadon themselves didn’t even alert drivers. We had to find out from different driving companies what was going on,” said Stephanie Floyd of Denton, North Carolina, whose husband, Travis, drove for Celadon. “It’s a stressful time of year to be out of work and with three small children it makes it harder.”

They have been frustrated and left in the dark, as she said Celadon wasn’t responding to inquiries from workers.

“It’s heartbreaking, trying to find another job on the drop of a dime, hoping to find something in time so we don’t miss a paycheck for bills and still be able to afford to buy our children stuff for Christmas.”

Celadon referred comment to a press release. “Our intent is to ensure drivers deliver their last loads safely and will then be instructed on where to deliver their equipment. I have no further comments,” said Svindland, the chief executive, in an email.