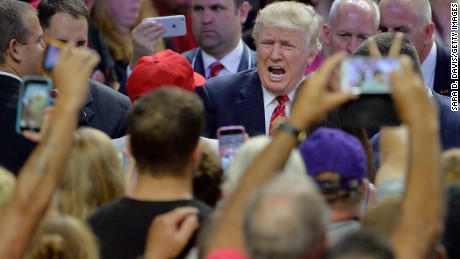 (CNN)Donald Trump is denying that he called on gun advocates to use arms against Hillary Clinton — but that hasn’t stopped a raging debate about whether his comments have crossed a legal line.

Free speech experts and watchdog groups say he hasn’t broken any law. But they are still cautioning that his words can have consequences.
Conservative radio host Hugh Hewitt on Thursday asked Trump if intended “to incite violence” against his Democratic presidential opponent with his comments Tuesday that “Second Amendment people” could perhaps prevent her from appointing Supreme Court justices as president.
“No, of course not,” he said, “and people know that.”
But Patti Davis, the daughter of Ronald Reagan — himself the victim of a 1981 assassination attempt — took issue with them.
She called his comments “glib and horrifying” in a Facebook post Wednesday night and warned they would be received by critics, temperate supporters and “the person sitting alone in a room, locked in his own dark fantasies, who sees unbridled violence, as a way to make his mark in the world, and is just looking for ideas.”
RELATED: Reagan daughter blasts Trump for inciting violence
Whether or not such a scenario were to occur, First Amendment lawyers roundly agree that Trump has not broken any law — and that his particular words did not rise to the level that could invite criminal charges.
“I thought and I think it was clearly suggestive of some sort of gun-related response to the selection by Clinton of her Supreme Court justices or their decision,” Floyd Abrams, the constitutional lawyer and a leading authority on First Amendment law, told CNN on Wednesday. “However much offense one might take at (Trump’s words), and however much one may think it may be destructive of a democratic system in a sense, it certainly is protected.” 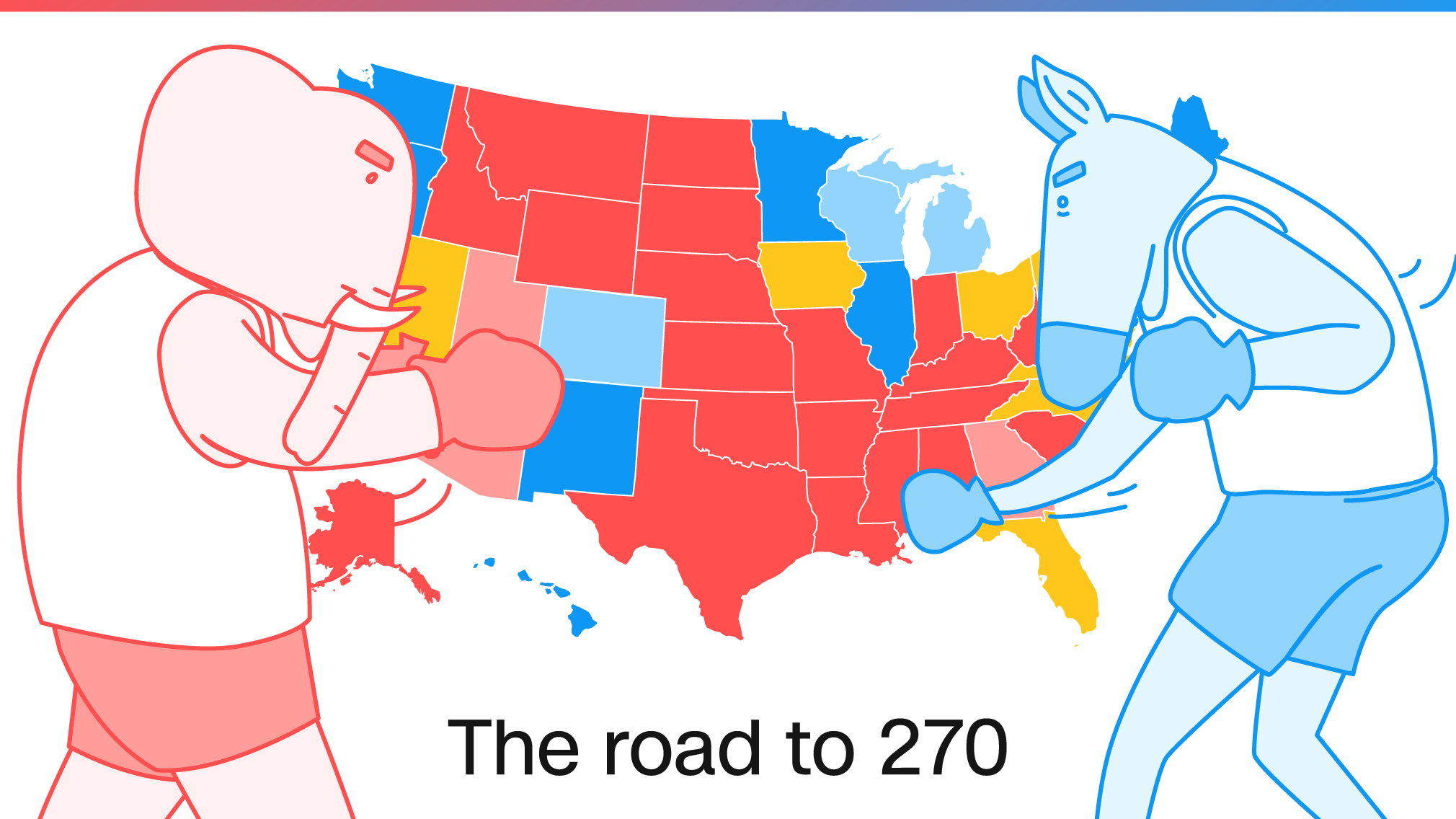 Abrams cited the a legal precedent known as “incitement,” which, he explained, “requires proof that you are calling on people to commit a criminal act with the intention that they commit the criminal and a high likelihood that they will.”
Lee Rowland, a senior staff attorney at the American Civil Liberties Union, agreed with that assessment, noting that while “the ACLU has called out Mr. Trump’s policies as posing a unique threat to the US constitution, this is clearly protected speech. Not illegal incitement — that’s the bottom line.”
“The courts have been particularly protective of rhetoric no matter how distasteful, when it occurs in the political arena,” she told CNN, while also dismissing the prospect of a civil penalty.
“There is no back door where you can sue people for words that are protected under the First Amendment,” Rowland said. “The courts have uniformly held that public figures (when targeted) have a higher bar than the average person in showing that words have hurt them.”
RELATED: Giuliani’s defense of Trump
Watchdog groups, though, warn that Trump’s comments shouldn’t be dismissed as mere political rhetoric.
“There is a particular group of people who have identified with some of Trump’s statements because there are some outlandish things he’s said and now, at this point, will turn anything he says into evidence he supports them,” said Oren Segal, director of the Anti-Defamation League’s Center on Extremism. “And it’s understandable.”
“The reality,” he added, “is that during this campaign season we have seen a kind of language used that is different from what we’ve seen in the past. You have people who seem to believe that Trump is speaking to them — and I mean extremists.”
He pointed to an escalation in Trump’s language over the course of the campaign that has escalated concerns.
Trump asked the audience at a rally in February: “If you see somebody getting ready to throw a tomato, knock the crap out of them, would you?” He continued, “Seriously. Okay? Just knock the hell — I promise you, I will pay for the legal fees.”
On the eve of the Nevada caucuses, also in February, Trump watched a protester being escorted out of an event and said, “I’d like to punch him in the face.”
“In the old days,” Trump added, they would be “carried out on stretchers.”
In March, a rally in Chicago was canceled after demonstrators both in and outside the venue clashed with supporters, a scene that repeated itself in places like San Diego and San Jose.
Jonathan Wackrow, a former Secret Service agent, said Trump’s comments could amount to more than just heated words. He warned that since the GOP nominee has a huge following, his comments run the risk of sparking action by one or more of his “vulnerable” followers.
“You’re not just responsible for what you say,” the former head of the CIA, retired Gen. Michael Hayden, told CNN’s Jake Tapper on Tuesday. “You are responsible for what people hear.”

But Trump defenders have pushed back on the criticism laid at the Republican nominee’s feet.
Former New York Mayor Rudy Giuliani told CNN’s Chris Cuomo that Trump had been misunderstood.
“You don’t give him a fair shot. You take his words and you parse them and you take them apart,” Giuliani told Cuomo, making it clear that he meant the media generally, not Cuomo himself. “I was on the plane with him when they called him and said to him, ‘They’re accusing you of saying, “Kill Hillary Clinton.” He said, ‘What? I didn’t say that.’ “
RELATED: Secret Service spoke to Trump campaign about 2nd Amendment comment
Yet Trump critics hear echoes of words that have had tragic consequences in the past.
Connecticut Gov. Dannel Malloy, in an interview with MSNBC on Tuesday, likened the environment surrounding the current political campaign to that which preceded the 1995 assassination of Prime Minister Yitzhak Rabin in Israel.
He said that Trump’s remarks “instantly” brought him back to that moment. “This is insanity, it’s a sickness, it’s an evil, Republicans and Democrats and Independents have to reject this, we have to stand up to this, otherwise this insanity will play itself out in our own country.”
A better comparison, according to Heidi Beirich, director of the Intelligence Project at the Southern Poverty Law Center, would be the atmosphere surrounding another deadly 1995 attack — the bombing of the Albert P. Murrah Federal Building in Oklahoma City.
“Trump just gave somebody like (convicted Oklahoma City bomber) Timothy McVeigh, who might be out there, a justification for committing violence,” she said on Wednesday.
To Beirich, what certain supporters heard in Trump’s remarks “is a call to arms, because Clinton is going to come and steal their guns. And it is essentially a call to revolution — using violence to solve political problems,” she said. “It’s against the ballot box.”
The Secret Service is the government agency positioned to handle the matter — and it is one he deals with every day.
After becoming a leading Republican primary contender, he was assigned Secret Service protection.
Wackrow said that a private citizen would certainly be questioned for making comments similar to Trump’s, and that he was confident the Secret Service had delivered a message to the campaign since “they have a duty of care.”
By early Wednesday, agents had spoken to Trump about the comments at least twice, a Secret Service official confirmed to CNN, saying that the campaign, which has denied public comment on the conversation, assured them that Trump did not intend to incite any violent behavior.