Liberal men say they want to be equal partners in housework and parenting. But it hasnt happened 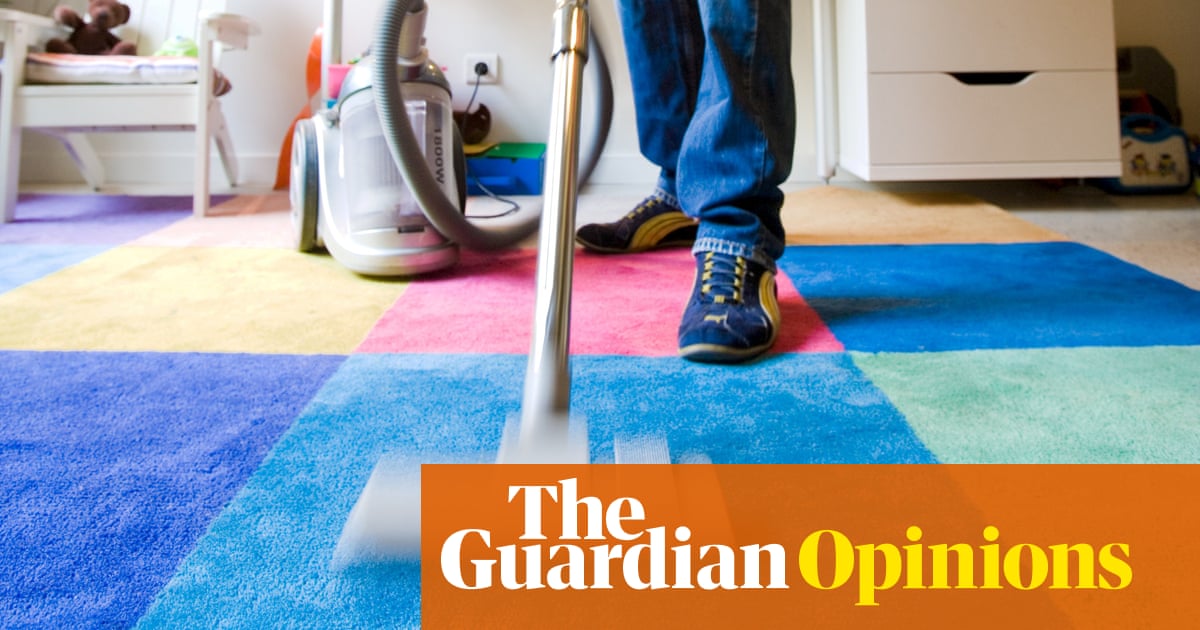 Imagine that this goes on for a week, two weeks, two months. Imagine the domestic fights behind closed bedroom doors. Imagine the wailing infants. Imagine the hunger, and the injuries, and the infections. Imagine the paid work that happens at the shop or at the office that would be delayed, then phoned in, done badly and eventually not done at all.

Imagine, that is, if women stopped doing housework. Or rather, imagine if they treated housework the way that many men do: as optional.

More than fifty years after second-wave feminists began demanding gender equality in domestic life, there is an increasing amount of evidence that women still do much more housework, eldercare, and childcare than men. The stress and lack of leisure time that this causes not only diminishes women’s quality of life, but also can have negative health effects – including risk of heart disease, cancer, arthritis and diabetes. Feminists have been saying this for years; increasingly, empirical data backs them up.

Overworked American women are frustrated with this inequality of housework, and increasingly willing to voice that frustration. Most aren’t wealthy women, who can simply outsource this work to other, poorer women – often immigrants or racial minorities – in the form of nannies, housekeepers and maids. More and more, the battle for an equitable distribution of housework is moving out of kitchens and bedrooms and into the public sphere. When the psychologist Darcy Lockman published an opinion piece in the New York Times recently, What ‘Good’ Dads Get Away With, it went viral, and there is a renewed interest in feminist analyses of housework.

But a growing awareness among women hasn’t been enough to fix the problem. The thing many people don’t want to acknowledge, and the thing stopping us from making more progress toward housework equality, is the resistance of men. Men remain unwilling to do their fair share of housework and childcare: they are oblivious, willfully ignorant, or pathologically indifferent to the stress and suffering of the women around them.

The immediate origins of this conflict go back to the late 1960s, when there was a huge influx of previously non-working women into the workforce. The trend was particularly distinct among the highly visible group of married white women, and it coincided with the rise of a second-wave feminist movement that was more than happy to issue critiques of the gendered inequalities of marriage, domesticity and family life.

In this era, housework faced a popular reckoning. Women vocally rejected the patronizing myth that they were fulfilled by a middle-class domestic life consisting of home, husband and children. Feminists critiqued capitalism’s dependence on women’s unwaged domestic labor, also called reproductive labor. They also argued that the different expectations of men’s and women’s housework responsibilities reflected not just a material exploitation, but a cultural attitude that imposes on women a moral imperative to always give their time, attention and energy for the good of others.

Two decades later, Arlie Hochschild’s groundbreaking 1989 book The Second Shift provided firm empirical evidence that men did dramatically less housework than women – even when those women worked full time, and even in the households of supposedly enlightened, liberal couples who self-reported equal distribution of housework.

In the aftermath of the feminist era, liberal straight men reported that they wanted to be more equal parents and partners, and that they intended to do an equal share of housework – chores, childcare and caring for the elderly. And then, they simply didn’t. When women entered the workforce, they effectively took on second jobs – first working for pay outside the home, and then working for free inside it.

The problem has not improved. A new report issued last week by the gender advocacy group Promundo, The State of the World’s Fathers, found that women spend up to 10 times as much time on unpaid domestic work as men. What do men spend those hours doing instead? Leisure activities, such as video games.

But housework is a tricky inequality to organize around. It takes place in the privacy of the home, making it difficult for women to see each other doing this work, and to collectively acknowledge the injustice that men do not share equally in the burden. It’s just not a very visible struggle. Housework is also hard to organize around because it is unwaged and often self-managed, and therefore easy to see as less important than women’s waged work and the inequalities they face in the paid workforce, such as sexual harassment, pay inequity and pregnancy discrimination.

It is also hard to organize around because women’s disproportionate housework persists because of the refusal of husbands and boyfriends to participate in these activities; they just don’t want to do it, and since their wives and girlfriends are doing it for them, they see no reason to. This resistance from men can be a bit of a third rail in feminist conversations around housework: many straight women can be resistant, even hostile, to feminist analyses that draw unflattering conclusions about the men they love. It is difficult, too, to break through mystifying cultural tropes about women, domesticity and marriage that cast this work as done not out of obligation or necessity, but out of love. Combine these, and it can be hard to convince many women that housework should be treated as work at all.

Real equality around housework will require something feminism has a bad track record of creating: a change in male behavior. Housework inequality persists because men choose to make it persist. Through willful ignorance, the “you’re-just-better-at-it-babe” patterns of manipulation that feminists call “learned incompetence”, or sheer selfish disregard for what women suffer, men choose not to do housework. They choose not to do the mental work of remembering and following up on the family’s needs, they choose not to care for their own children, they choose not to clean up after themselves. In order to fix this problem, feminists cannot afford to diplomatically ignore the fact that the problem of housework inequality is a problem of men’s volition.

Men will have to make better choices. Men will have to develop a greater sense of responsibility and moral feeling toward the women they live with, and they will have to take this sense of responsibility and moral feeling and actually put it to use. Men need to change more diapers and wash more dishes and remember more appointments and comfort more crying children. They need to pick up after themselves and after their kids, and they need to sacrifice some of their leisure time to do it. Men are not likely to do this willingly. But women may be able to compel them to. After all, if a growing number of women become conscious that their housework is work, then a growing number may be willing to contemplate a strike.