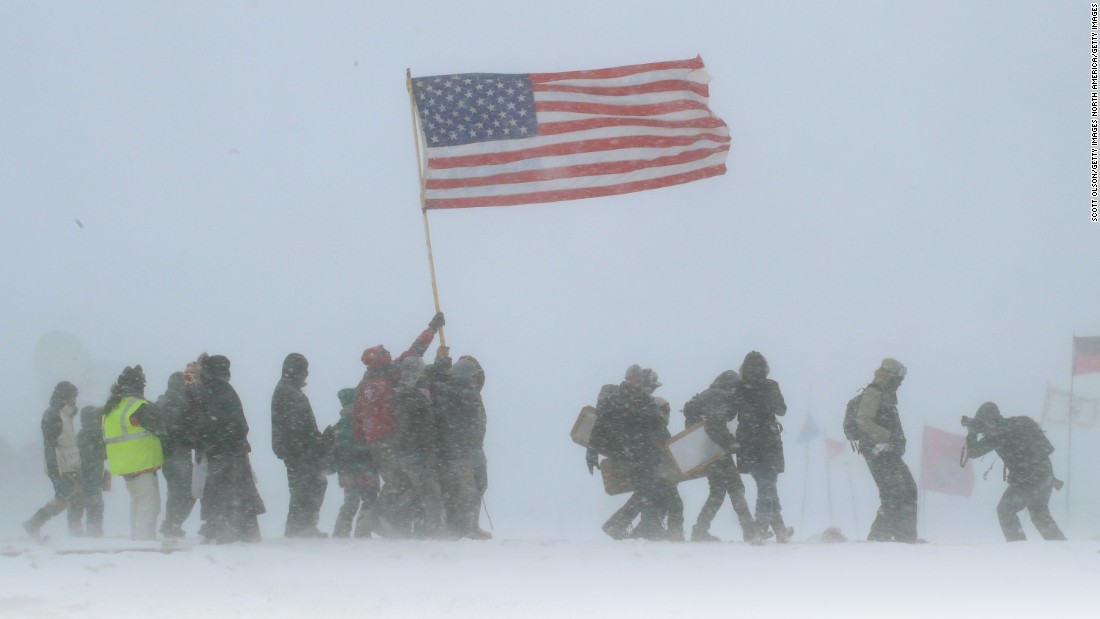 (CNN)The troops are mobilizing for a second “deployment.”

The Veterans Stand group is once again raising funds for protesters who have been fighting construction of the Dakota Access Pipeline. So far, the GoFundMe effort for the new campaign has raised $186,767 of the $500,000 goal, according to the group’s GoFundMe page. The funds will go toward supplies for the North Dakota protest camp, transportation of veterans to and from Standing Rock Indian Reservation and operations. The Facebook page sites increased “turmoil and uncertainty” as a motivation to continue efforts.
After raising $1,155,780 on GoFundMe in December to provide transportation and supplies for the thousands of veterans who volunteered to travel to Standing Rock and support protesters, some veterans formed Veterans Stand, with the mission to “unite citizens and all peoples through our shared military service, to fulfill the promise to defend America from enemies, foreign and domestic, by combating the oppression of our fellow human beings and working to create a better future through continued sacrifice and service.”

On December 5, protesters celebrated after the US Army Corps of Engineers announced plans to find an alternative route for the pipeline. But just a few weeks ago, President Donald Trump signed executive actions to continue construction of the pipeline. On Tuesday, the Corps of Engineers notified Congress of its intent to grant an easement for the project, allowing it to move closer toward completion.

Veterans are prepared to continue the fight against the pipeline. Michael Wood Jr., founder of Veterans Stand, said new efforts are more focused on supporting the camps in any way possible. “It is unlikely that we will send a mass group of people like before,” Wood told CNN. “The biggest misconception is that Veterans Stand wants to do anything aggressive in response. People want to do something and they just don’t know what to do. We just want to give people a platform.”
Anthony Diggs, the secretary of communications for Veterans Stand, says protesters are still hopeful. “People expected the easement to be granted and they are still going to stay,” Diggs told CNN. “The Water Protectors are here peacefully in prayer and in ceremony as they have always been.”
Diggs has been at the Standing Rock Reservation for the last week meeting with camp leaders, making arrangements for supplies, mobilizing volunteers and focusing on supporting infrastructure.

Environmentalists, local residents and indigenous tribes say the pipeline’s proposed route would cut across the Ogallala Aquifer, which is one of the world’s largest and the main source of drinking water and irrigation for millions of people.
“It’s not just the people of Standing Rock who are at risk,” Diggs said. “The water of millions of Americans is at risk. This is not a local issue, it is a national problem we are dealing with here.”
The $3.7 billion pipeline would carry 470,000 barrels of crude oil a day through North Dakota, South Dakota, Iowa and Illinois. Tribe members, veterans and their supporters have been protesting its construction since last summer because it would traverse sacred Sioux land and has the potential to contaminate the water supply, and raises other potential environmental issues.
While proponents of the pipeline say it would be the most cost-effective and environmentally responsible way to move crude oil, significantly reducing US dependence on foreign oil, there has been continuous support for the protesters, both in person and on social media using the hashtag #NoDAPL.
“People need to know about this,” Diggs said. “We still need support. This is an issue that affects all of us.”