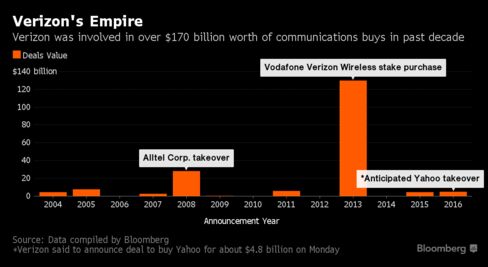 On Monday, Yahoo! Inc.s years-long fight to survive as a standalone company will draw to a close.

Verizon Communications Inc. will announce plans to buy Yahoos core assets for a bit more than $4.8 billion before the market opens, said two people with direct knowledge of the situation who asked not to be identified because the information isnt public. The deal includes Yahoo real estate assets, while some intellectual property is to be sold separately, the people said. Yahoo will be left with its stakes in Alibaba Group Holding Ltd. and Yahoo Japan Corp., with a combined market value of about $40 billion.

A transaction stands to finally seal the fate of web pioneer Yahoo after months of speculation and pressure from investors including Starboard Value LP. The deal will add the company and its millions of daily users to Verizons growing stable of media properties and is also likely to end the reign of Yahoo Chief Executive Officer Marissa Mayer, who tried and failed to re-invent Yahoo as an independent company.

With its core wireless business maturing, Verizon is expected to keep Yahoo mostly intact to compete with Alphabet Inc.s Google and Facebook Inc. in digital ads by tapping into users on sites like Yahoo Finance. The takeover will double the size of Verizons digital advertising, placing it as a distant third behind Google and Facebook in the $187 billion market.

The deal speaks to a clear strategy shift at Verizon, Craig Moffett, an analyst with MoffettNathanson, said Sunday. They are trying to monetize wireless in an entirely new way. Instead of charging customers for traffic, they are turning to charging advertisers for eyeballs.

Yahoo gained 1.4 percent to close at $39.38 on Friday after Bloomberg News reported it was closing in on a deal with Verizon. Shares of Verizon advanced 1.3 percent to $56.10.

The deal comes about two years after Starboard began campaigning for changes at Yahoo. In September 2014, it pushed Mayer, who was a little over two years into leading a turnaround, to merge with AOL Inc. She didnt oblige. In February, facing continued pressure, the company said it was considering a sale.

In some ways, a takeover of Yahoo by Verizon would finally give Starboard what it wanted because the telecom giant acquired AOL last year. Back then, Starboard saw combining the two flailing Web portals as a way to cut $1 billion in costs. AOLs advertising technology, which has improved under CEO Tim Armstrong, can now better leverage Yahoos reasonably strong content for mobile devices, Moffett said.

Verizon is hoping that combining Yahoos content with AOLs ad technology platform and Verizons own insights into user data can make the advertising inventory much more valuable, he said.

The activist crusade may also cost Mayer her job. Her arrival was met with great fanfare when she was lured away from Google in 2012. While she made progress on some products such as Yahoos e-mail and media, overall sales growth remained sluggish.

A failed attempt to spin off the companys Alibaba stake, now worth about $32 billion, hurt Mayers standing with investors. The plan was scuttled to avoid a potentially large tax burden.