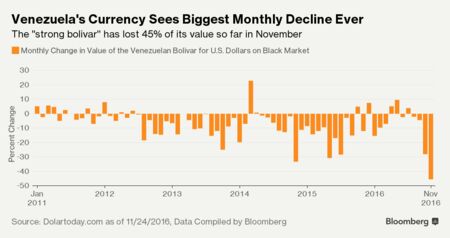 Venezuelas currency – the so-called strong bolivar – is weakening beyond levels that analysts had forecast just a few weeks ago as an expanding money supply chases a limited amount of U.S. dollars.

The currency has lost 45 percent of its value so far this month to trade at 2,753 bolivars per U.S. dollar on Thursday, according to dolartoday.com, a widely-watched website that tracks the exchange rate in Caracas. Thats the biggest monthly decline ever, according to data compiled by Bloomberg.

The government has started injecting bolivars into the financial system in an accelerated manner again, and its set off repressed demand, Asdrubal Oliveros, director of Caracas-based economic consultancy Ecoanalitica, said in a telephone interview. There are too many bolivars in the street. People have the option of either buying goods or dollars, and theyre buying dollars.

Torino Capital chief economist Francisco Rodriguez said in a report on Nov. 7 that the bolivar could likely end the year around 1,990 per dollar on the black market after the currency started to weaken in October following six months of relative stability. He raised that estimate to 2,327 bolivars per dollar in a report sent on Nov. 14. Inflation will likely start to accelerate over the coming months in certain sectors that are sensitive to the black market rate including alcoholic beverages, restaurants, electronics, and appliances, Oliveros said.

Inflation in the country will likely rise to 400 percent in 2016, according to the median estimate of 13 analysts who responded to a Bloomberg survey. Individual responses ranged from 257 percent to 1,500 percent.

Venezuelas money supply has risen 127 percent over the past year, according to the latest data available from the Central Bank in Caracas and compiled by Bloomberg.

To read more about the decline of Venezuelas currency, click here.

Venezuela has maintained strict currency controls since 2003 and currently has two legal exchange rates — known as the Dipro and Dicom rates — of 10 and 661 bolivars per dollar used for priority imports. On the black market, where people and businesses turn when they cant obtain government approval to purchase dollars at the legal rates, the bolivar has weakened 69 percent over the past year.

Venezuelas entire economic environment is influencing this phenomenon, Oliveros said, adding the exchange rate could end the year between 3,500 and 4,000 bolivars per dollar on the black market. Inflation is going to keep rising, theres a risk of default, and the political situation is becoming more tense each day. People prefer to protect their money.

With assistance by Sebastian Boyd

John Bolton: the man driving the US towards war … any war