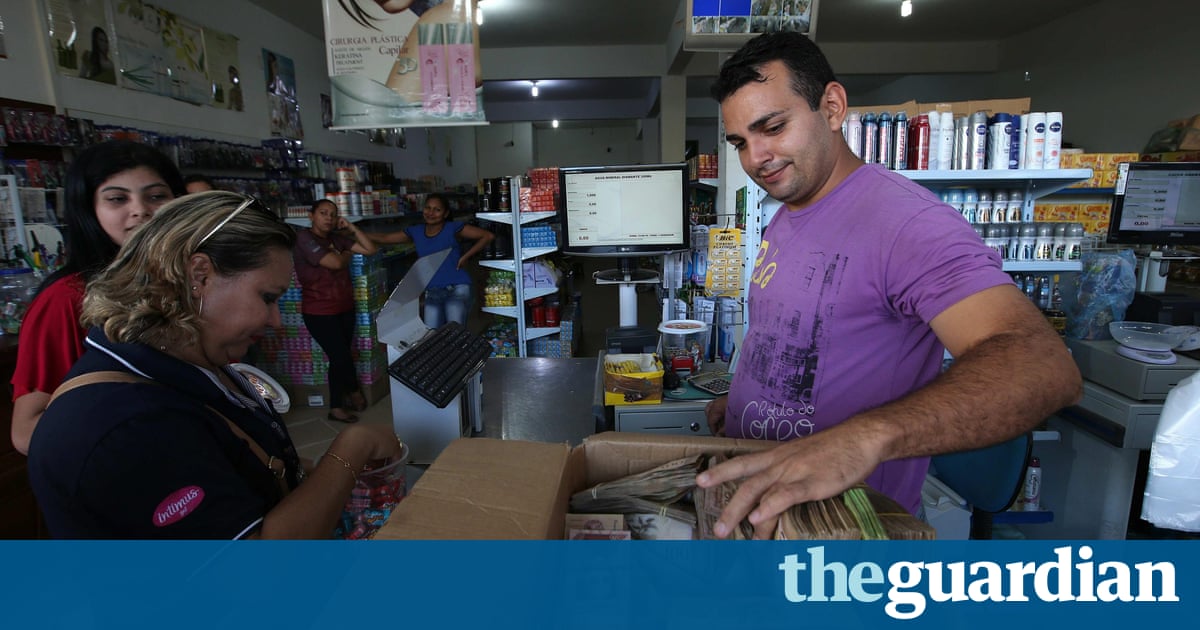 At first sight, the small Amazonian border community of Pacaraima appears to be doing well amid the humanitarian crisis afflicting Venezuela, transforming itself into a giant grain warehouse, and supplying food at considerable profit to a country that cannot feed itself.

Boutique Charmoso has stopped selling smocks and bikinis and started hawking rice and flour. The Flip-Flop Shop is piled high with sacks of sugar and pasta. Four of the towns seven butchers have given up carving meat and switched to flogging grain. Boxes of cooking oil fill the lobby of the Amazon hotel. Drinkers at the Ronaldo Bar have to weave between stacks of produce.

I went for a haircut last week, but even my salon has switched businesses, said social worker Socorro Lopes. Its madness here now. There is such a rush to get rich.

But the economic boom has come at a price: growing desperation in Venezuela is starting to send ripples across the border, where it is triggering a new set of social tensions.

An estimated 30,000 Venezuelan migrants have come to Pacaraima looking for food, jobs and medical care in an influx that threatens to overwhelm local hospitals, police and social services.

The chaos in Venezuela is causing turbulence for us, says Lopes, who is on the frontline of municipal efforts to cope with rising homelessness, begging, prostitution, hunger and ill health.

We know this is just the start. We dont know how bad it will get. But if the number of migrants keeps growing uncontrolled, we wont be able to deal with crime and the demand for healthcare.

In the past 10 months, 1,805 Venezuelans have sought refugee status in Brazil, more than the combined total for the previous five years. Deportations in 2016 are on course to be 10 times higher than in 2015. In the vast majority of these cases, they enter through the porous border at Pacaraima.

For most of its history, this Brazilian town was the poor neighbour of the Venezuelan town of Santa Elena de Uairn. Many Brazilian children crossed the frontier to attend the better-resourced schools of the oil-rich state. The sick would go to Venezuelan hospitals. Hundreds of workers would commute to higher-paying jobs. And Indian tribes in this indigenous reserve have never recognised the border, crossing back and forth to visit their ancestral territories.

Today, however, the relationship has been reversed by one of the greatest economic and social upheavals Latin America has seen this century. Venezuela has hyperinflation heading towards 2,000%, plunging supplies of food and medicine, and growing rates of malnutrition and murder.

By comparison, Brazil even in the midst of its worst recession for decades seems a sanctuary of stability, safety, provisions and profits. Since Venezuela dropped food tariffs a couple of months ago, traders have come from as far afield as China, Pakistan, Bangladesh and Lebanon to cash in.

Mostly though, the influx is of Venezuelans filling cars and trucks with goods they cannot find in their own country. Some buy for themselves; most buy to sell on at a profit.

For me, its a business, said Elisa Flores, as she loaded up a battered Chevrolet with sacks of rice, spaghetti, cooking oil, mayonnaise and washing-up liquid. This town should be grateful. They make more money from our government than anyone. But this situation is not good for the Venezuelan people. There is no starvation, but there are many people who dont get enough to eat.

At the bus station, a family of five Venezuelans waited to start their journey home, after putting in a few months work in Brazil. They were loaded up with provisions that they cannot find in their own country. Its terrible. There are shortages of everything. The government is robbing the people, said the mother, who declined to give her name.

Drawn by availability of food and work, Venezuelans are moving toward the border region in droves. The population of Gran Sabana the municipality closest to Brazil has increased by about 40% in the past two years. Basically, its because food production in Venezuela has collapsed, Lopes said. Their system is broken so they have no money, no products and no work.

The knock-on effects on Pacaraima and the state capital of Boa Vista are increasingly evident.