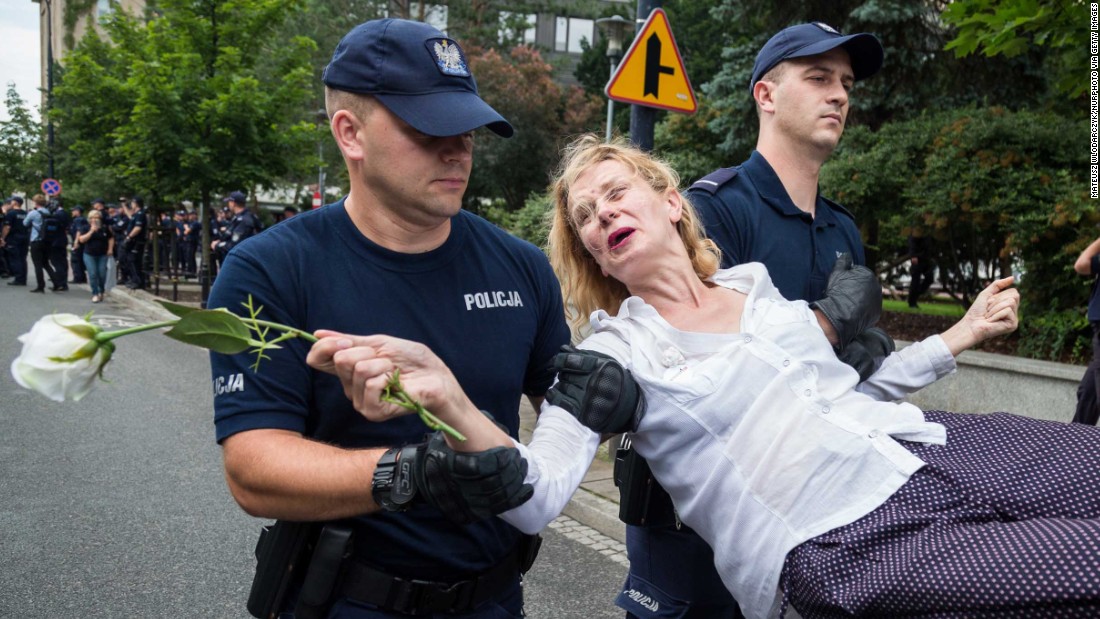 (CNN)Marching by candlelight, demonstrators poured into streets across Poland to protest what some lament as the impending death of democracy in the country.

Crowds gathered in locations across the country on Thursday evening, including outside the presidential palace in Warsaw, just hours after the lower house of Parliament passed a bill that would give the populist government the power to push all of the country’s Supreme Court judges into retirement.
Videos shared on social media captured the moment when protesters assembled in the capital sang a resounding version of the national anthem, waving Polish and European Union flags.
The upper house of Parliament, controlled by the country’s ruling party — the Law and Justice party, or PiS — continued to debate the proposal on Friday as protests grew.
The proposed bill has now drawn the attention of the US State Department, which cautioned the PiS against adopting the measure it said appeared to “undermine judicial independence and weaken the rule of law in Poland.”
“We urge all sides to ensure that any judicial reform does not violate Poland’s constitution or international legal obligations and respects the principles of judicial independence and separation of powers,” said State Department spokeswoman Heather Nauert in a statement. 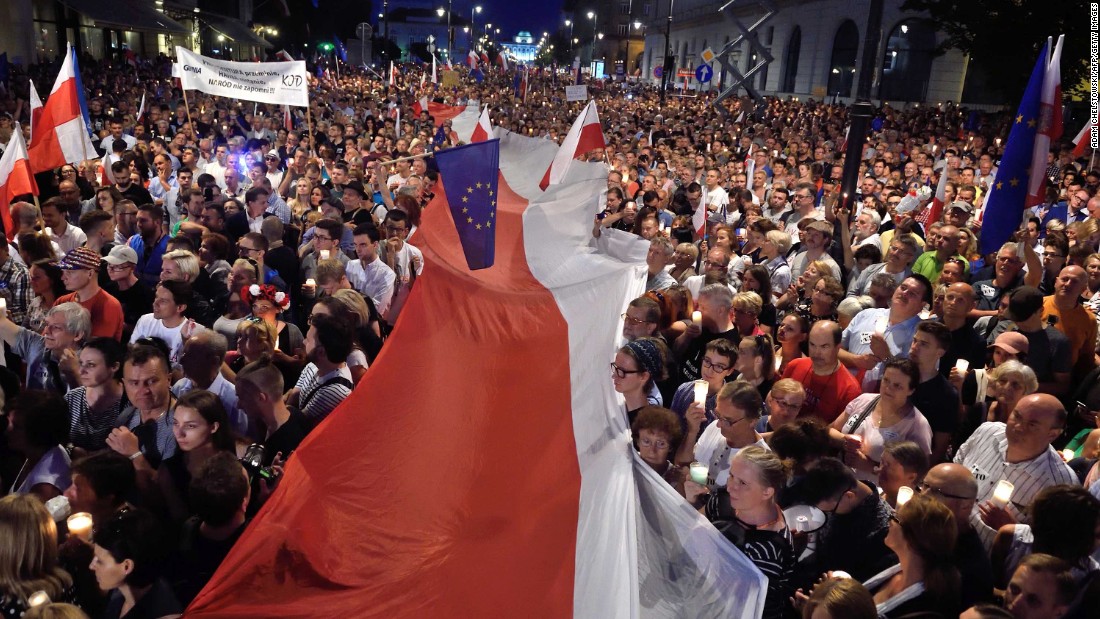 The public outcry over efforts by the PiS to curtail judiciary independence has flown largely under the radar amid recent high profile visits from US President Donald Trump and the British royals.
The Duke and Duchess of Cambridge received a rapturous welcome while on a walk outside the palace earlier this week.
During his visit to the capital earlier this month, President Trump praised the nationalist party PiS in a celebratory speech to a large crowd.
“It is a profound honor to stand in this city, by this monument to the Warsaw Uprising, and to address the Polish nation that so many generations have dreamed of: a Poland that is safe, strong, and free,” Trump said.
But if the party triumphs, it could mark a turning point for the Eastern European country — one of the first former Communist nations to join the EU. Many protesters feel that Poland’s position as a Western democracy is hanging in the balance. 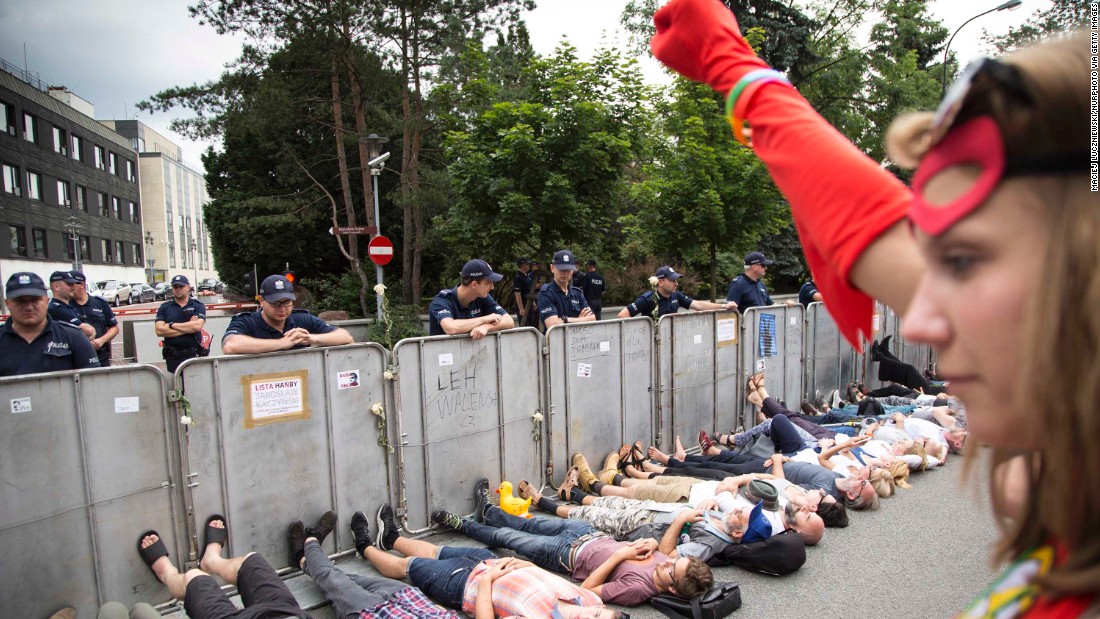 In Warsaw, Andrzej Tomasz Celinski was supposed to spend his Thursday evening in a hospital; his one-month old son is sick. He spent it instead marching with a candle in hand for his son.
“I hope that, when he will grow up, that he will not have to go to demonstrations like this,” he told CNN. “So I’ll tell him that when he was in hospital, I went for a demonstration also to fight for his future.”
Since coming to power, PiS has eroded other institutions and freedoms: the right to peaceful assembly has become more restricted and new media laws have made it more difficult for the press to operate independently.
Poland plummeted 29 spots in 2016’s World Press Freedom Index to 47. In 2016, it dropped seven more. 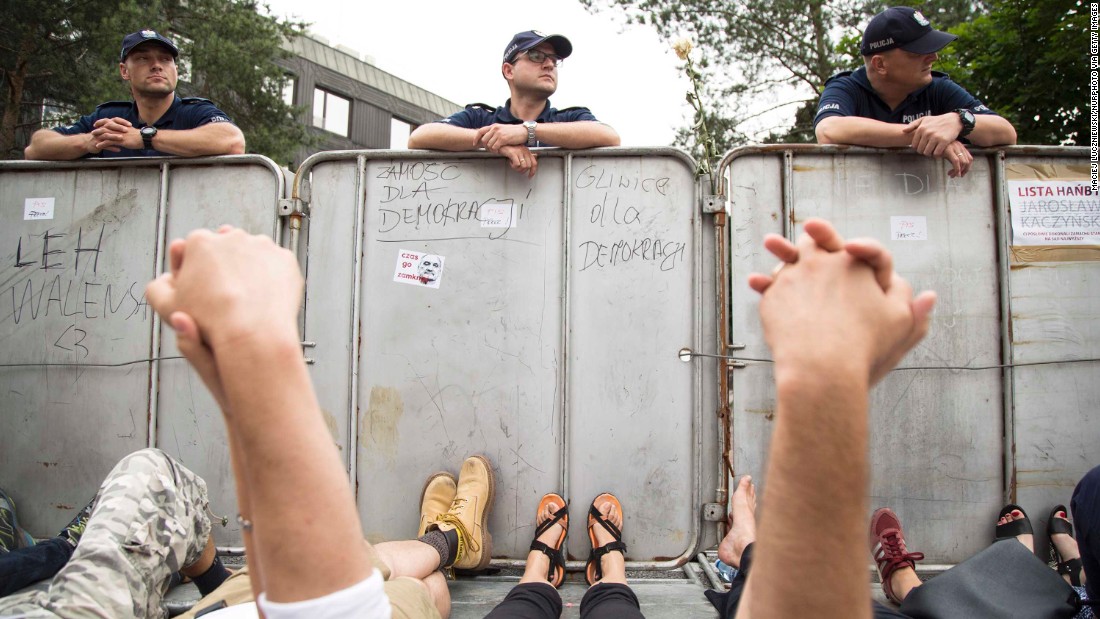 The party’s move to control one of the last remaining independent government institutions has triggered warnings from the European Union.
In a speech in Brussels Wednesday, a top EU official threatened the use of Article 7 — a mechanism that would allow for sanctions against Poland and possible suspension of their voting rights in the bloc. It’s never been used before.
“Each individual law, if adopted, would seriously erode the independence of the Polish judiciary,” Frans Timmermans, first vice president of the European Commission, said. “Collectively, they would abolish any remaining judicial independence and put the judiciary under full political control of the government.”

As word spread of Friday’s final vote on the proposed Supreme Court bill, protests sprang up in cities across Poland, with many Poles using the hashtag #wolnesdy or “free courts” on social media. 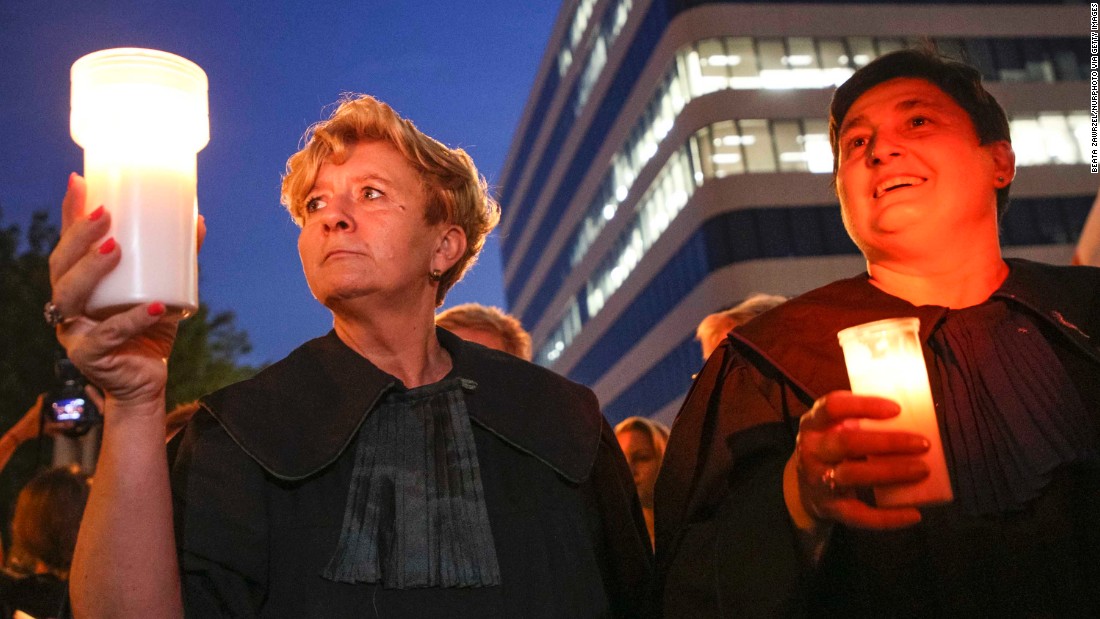 Journalist Jakub Grnicki couldn’t find the words in English to describe what he felt at the protests Thursday night — “Podniosla” is the word in Polish.
“It was a nice atmosphere, but in a ceremonial way,” he said. “It was very gentle … this was a protest for values. People had a feeling that there was something bigger happening here.”
The moniker #CandlelightRevolution gained traction online as many attending demonstrations posted photos and videos of crowds lit up by flickering candlelight.
“It’s a light of objection,” Wroclaw protester Tymoteusz Matusiak told CNN. “When somebody dies, you bring a light to the cemetery. This law means the death of independent judiciary.”
Chants of “Wroclaw walczy (Wroclaw is fighting),” echoed in the city’s Market Square as Matusiak and others shouted.
Poznan protester Joanna Przystaska said she was scared for what may happen next.
“At first, our government destroyed the constitutional court and now they destroyed the Supreme Court so it will be dependent on the government,” Przystaska said. “It’s against [the] constitution and democracy.”