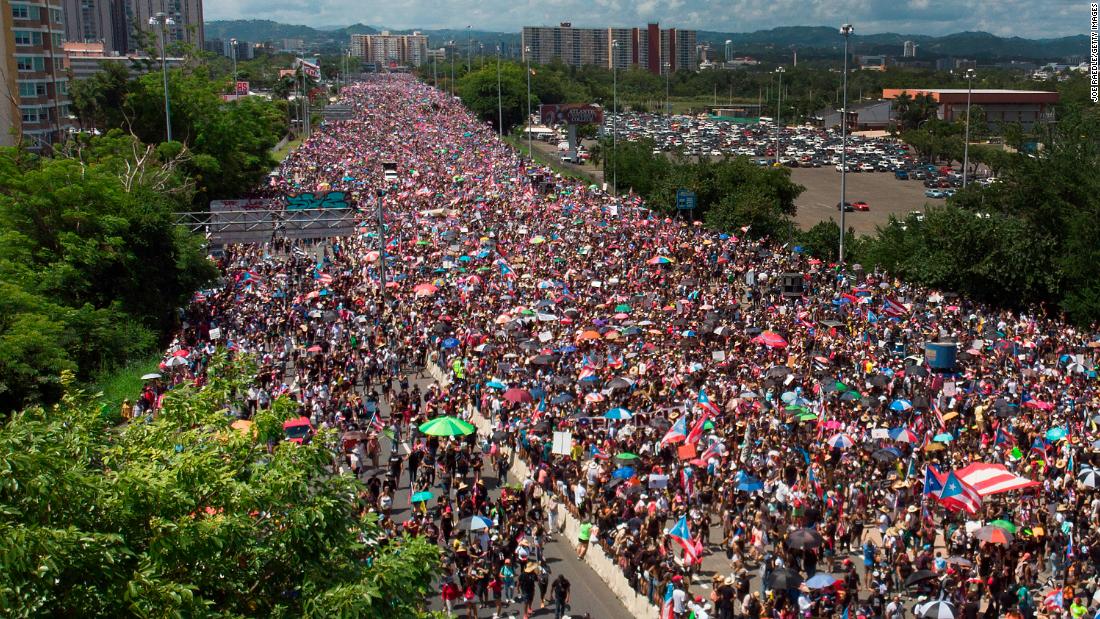 San Juan, Puerto Rico (CNN)As protests against Puerto Rico Gov. Ricardo Rosselló intensified on Monday, politicians on the US mainland joined the chorus of voices criticizing his leadership or calling for him to resign. 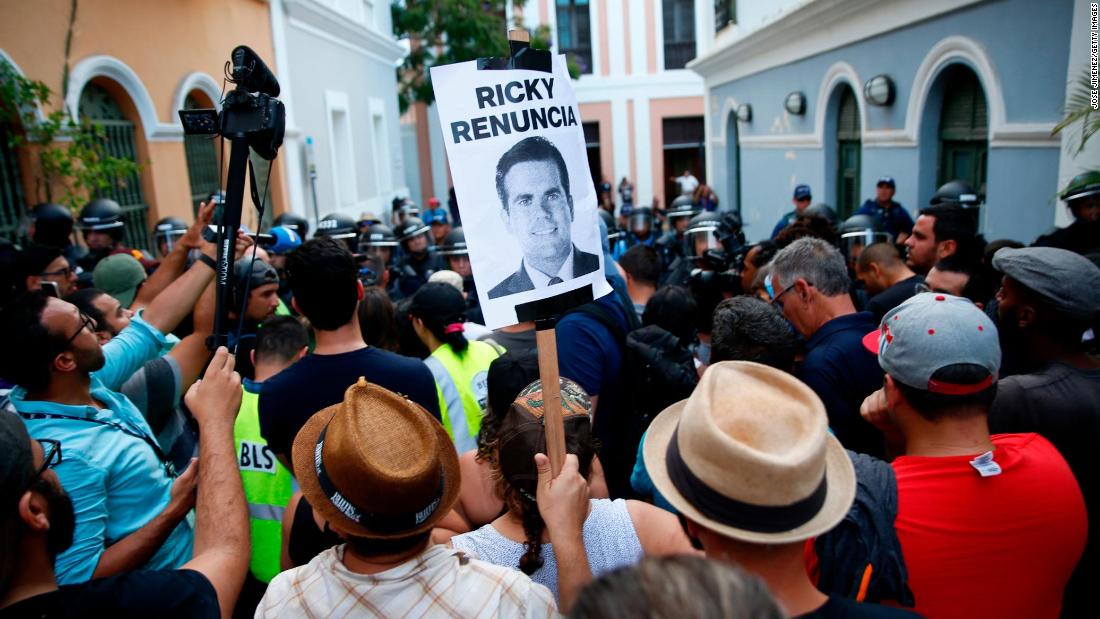 “Governor Rosselló has exhibited a pattern of sexist, homophobic and entirely inappropriate behavior,” New York City Mayor Bill de Blasio said in a statement, referencing the nearly 900 pages of leaked messages between Rosselló and members of his inner circle that sparked the protests.
The group chat messages “offended almost every group on the island,” said Angel Rosa, a political science professor at the University of Puerto Rico. In them, one member of Rosselló’s inner circle joked about victims of Hurricane Maria.
“While Puerto Ricans attempt to heal from Hurricane María, he mocks victims for a cheap laugh,” de Blasio said. “Governor Rosselló should resign immediately.”
New York Attorney General Letitia James said in a statement that “the ongoing crisis of faith in Governor Rosselló makes his continued leadership untenable and he should resign.” 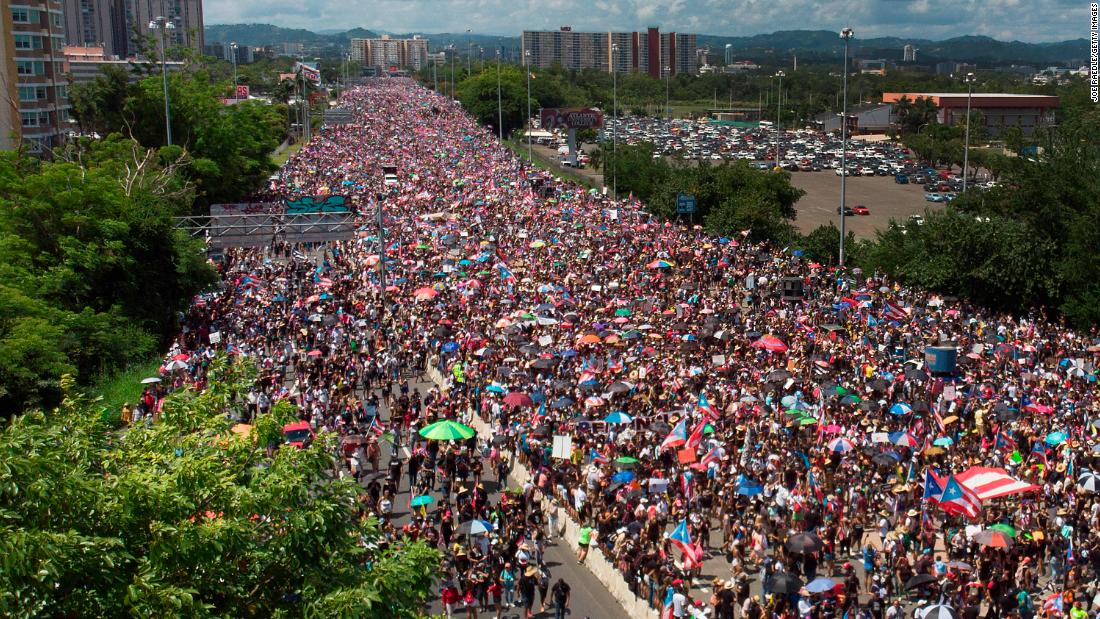 Though Rosselló announced Sunday that he would not seek reelection when his term is over, protesters say they won’t rest until he has left office.
San Juan Mayor Carmen Yulin Cruz said the governor’s refusal to step down has “added fuel to the fire.”
“We are prepared here at City Hall with a makeshift emergency unit with medics and doctors and nurses to take in anybody that receives tear gas or has a cut in their body or potentially been shot,” she said.

‘This has never happened in Puerto Rico before’

Protests have been ongoing for the past week — and older protesters said Monday’s rally was one of the largest they’ve ever seen.
“This has never happened in Puerto Rico before,” Rosa said.
Police deployed tear gas into a crowd of protesters Monday night. Officers told the crowd of protesters who were behind a barricade to get back and gave them several verbal warnings on the speaker system. Police also used an alarm siren on a loud speaker as a warning for the crowd to disperse. Protesters did not heed the warnings, instead throwing water bottles and other objects at the police.
As the crowd dispersed, police fanned out along streets and alley’s in Old San Juan and continued to use gas against pockets of protesters.
The protesters spanned many generations and political leanings. Both supporters and opponents of US statehood came together for this cause.
They say the offensive chat messages are just one of many reasons why Puerto Rico’s leadership needs to go.
“I am fed up with the thieving government,” protester Maristella Gross said. “I am fed up with corruption. I am fed up with lack of integrity.”
“This is an opportunity to Puerto Rico to clean house, to start over,” said Ediris Rivera, 23.
Many protesters dripped with sweat, but Neysha Benitez, 24, didn’t mind the sweltering heat. Even when it started raining, marchers were undeterred by the heavy downpours throughout the early afternoon.
“We cannot be silent anymore,” Benitez said. “Our voices need to be heard.” 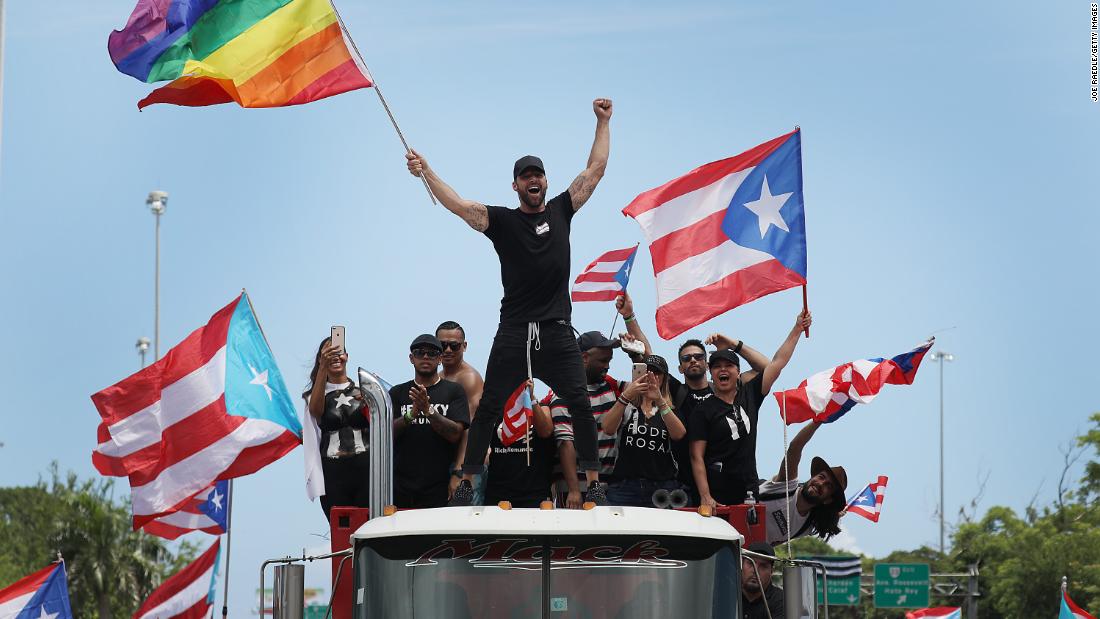 Puerto Rican singer Ricky Martin — one of the people targeted in Rosselló’s messages — joined protesters Monday and urged officials to start the process of impeachment.
“The only thing you (Rosselló) just did is mess with the mental health of Puerto Ricans,” Martin tweeted. “If he doesn’t want to leave, (impeachment) is the only option we have.”
Puerto Rican Reggaeton star Daddy Yankee, best known in the US for his part in the hit song “Despacito,” was also present.
“It’s obvious that we’re angry because we’re here and we saw a lot of things from the governor, but we’re behaving as well,” he said. “I think we’re demanding respect above everything and we deserve that.” 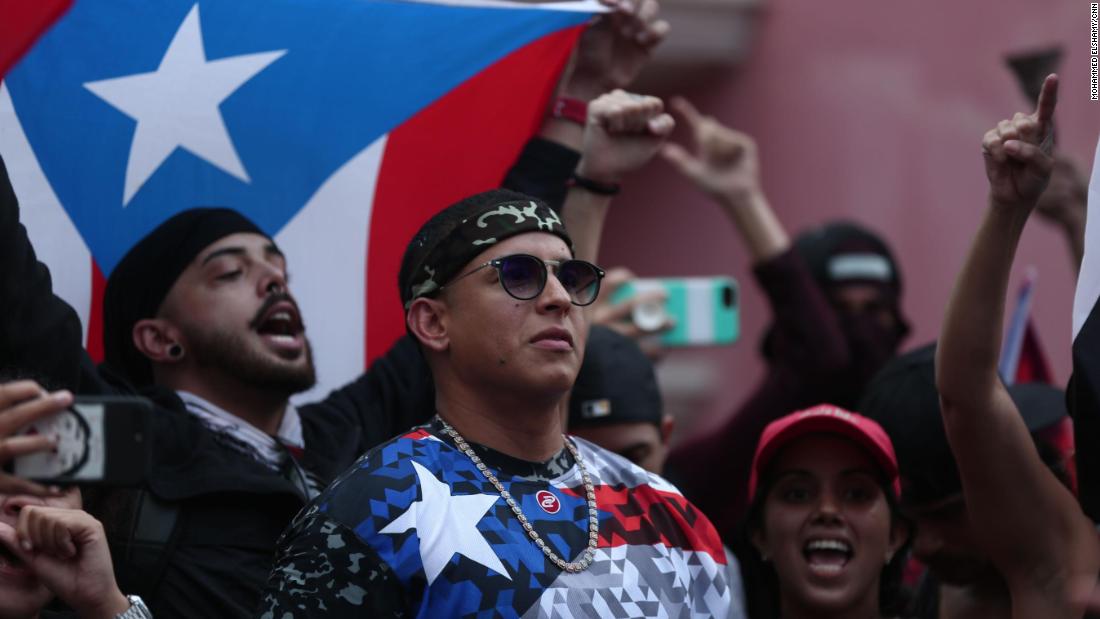 Protests against Rosselló have also been held on the US mainland. People gathered at New York’s Grand Central Terminal Monday evening to call for his resignation.
“The group I was with protested at Columbus Circle for two hours in the rain,” Andrew Padilla told CNN. “Then took the streets from 7th avenue through Times Square and reached Grand Central where we just kept bumping into new (people). It was beautiful.”
He said that “folks came from all over” to take part.

On Sunday, the governor acknowledged in a Facebook Live post that a “huge portion of the population is unhappy,” and said that he would not run for reelection next year and would resign as the president of the New Progressive Party.
Rosselló, who is about halfway into his four-year term, said he’ll keep serving as governor until he can hand the work “over to my democratically elected successor.”
“I have made mistakes, and I have apologized,” he said. “I am a good man who has a great love for my island and for everyone.”
During a tense interview with Fox News the next day — his first with a US outlet since the protests began — Rosselló said he’s “not making light of the demonstrations.” 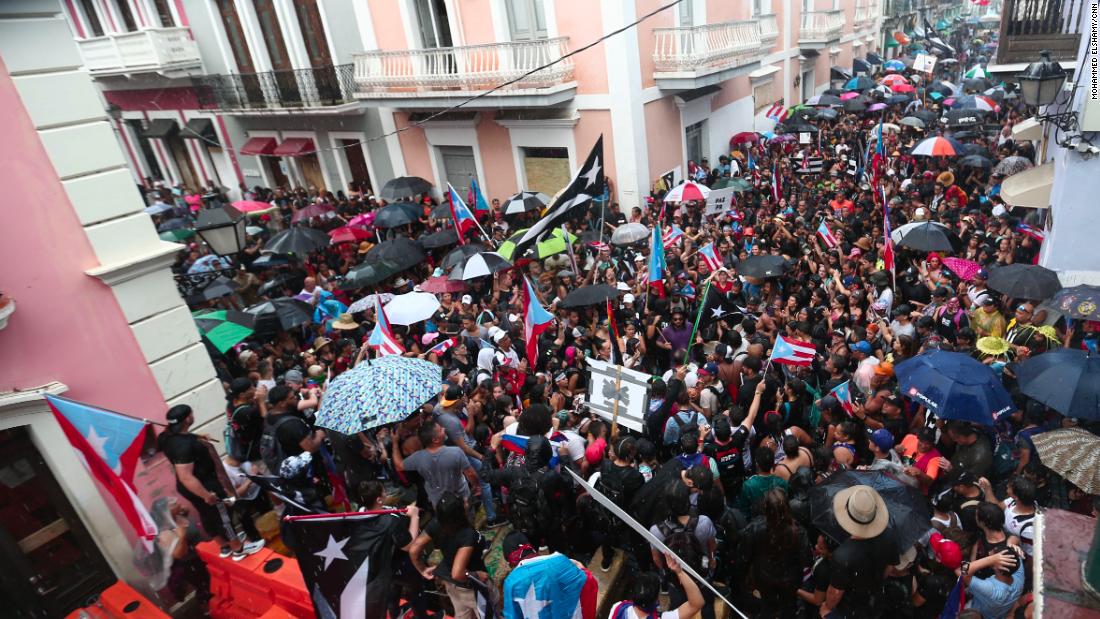 “I have used words that I have apologized for, but I’ve also taken significant actions in the direction of helping vulnerable sectors in our population,” he said, adding that his focus is to make sure the policies that he has enacted move forward.
Rosselló stammered after being asked repeatedly who supported him during this tumultuous time, and said San Sebastian Mayor Javier Jiménez supported him.
Jimenez, however, released a statement Monday saying he is awaiting the findings of the committee that was created Friday to determine whether Rosselló committed impeachable offenses. 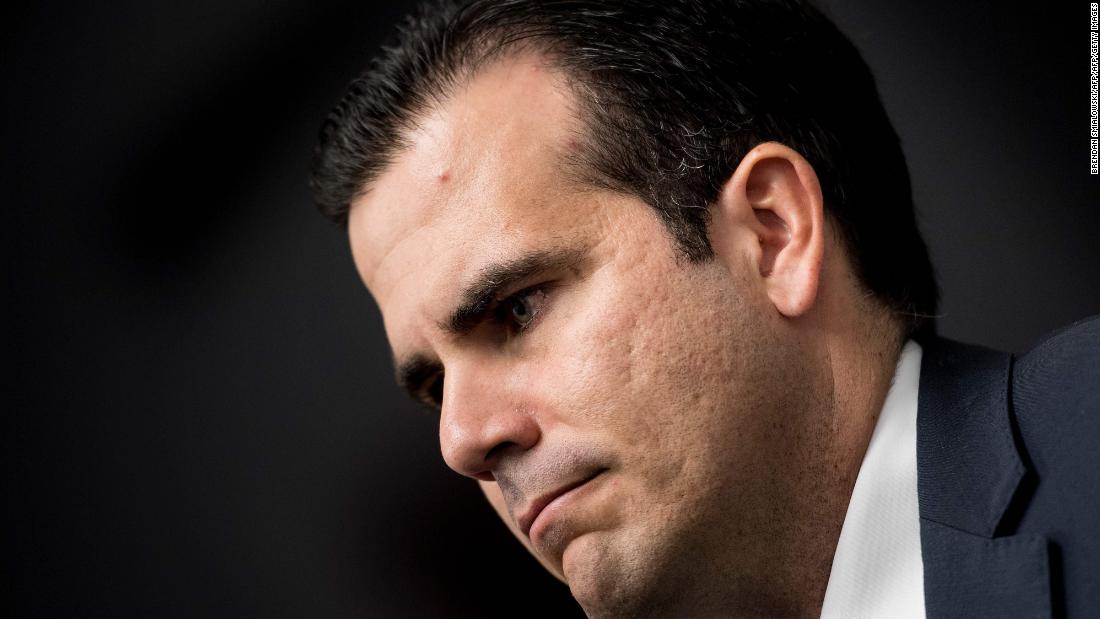 “When the governor says that I support him in his desire to stay in power, he’s wrong,” Jimenez said. “What I’m supporting is strict adherence to the Constitution.”
While protesters stand their ground, Rosselló’s New Progressive Party is quickly making changes.
Thomas Rivera Schatz, the president of Puerto Rico’s Senate, announced Monday that he will be the party’s new president.
“To the Puerto Ricans who were offended, I reiterate that our party rejects this behavior, censures these expressions and is in solidarity with you,” Rivera Schatz posted on Facebook.
The unrest is also affecting the island’s tourism industry. Royal Caribbean and MSC have canceled transit stops of their “MSC Seaside” and “Celebrity Equinox” cruises, according to Carla Campos, Puerto Rico’s Tourism Company director.
“The lines expressed concern about the demonstrations that could be generated in Old San Juan at night,” Campos said in a statement.
Campos also said “that the economic impact of cruise ship stops canceled to date could be estimated at around $2.5 million due to the expenditure of approximately 15,000 passengers.”

The president of Puerto Rico’s House of Representatives, Carlos “Johnny” Méndez, created a special committee Friday to advise him on whether the governor committed impeachable offenses. 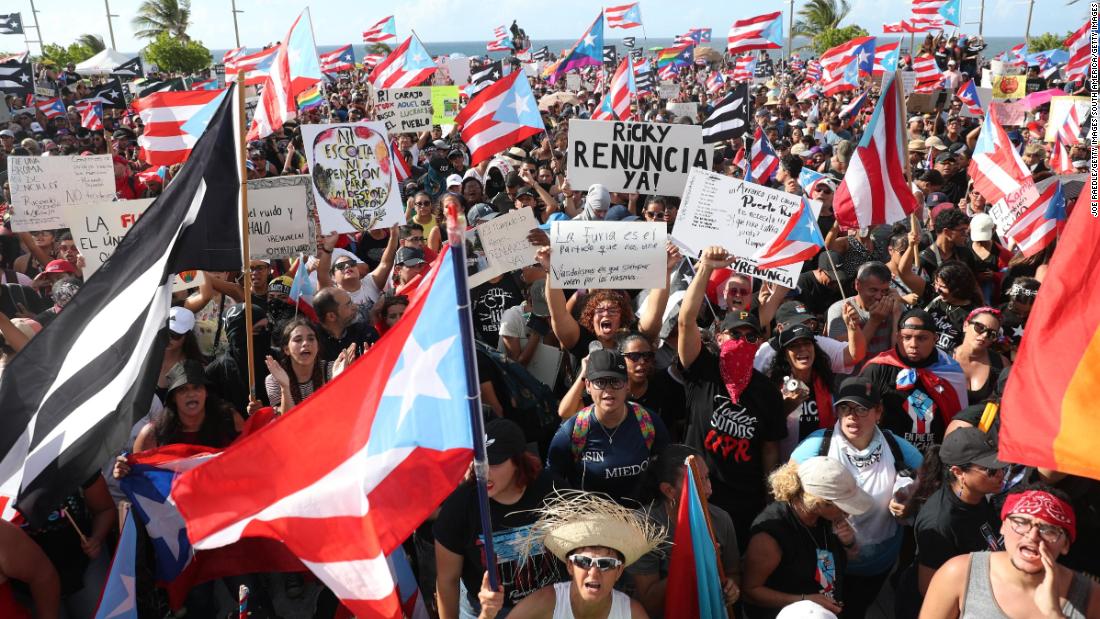 The impeachment research committee includes three attorneys who will have 10 days to provide Méndez with a detailed report, his spokesman Raúl Colón said.
The committee will evaluate the content of the leaked messages between Rosselló and Cabinet members and determine if there’s proof Rosselló committed a crime, Méndez said.
If officials discover the governor did commit impeachable acts, and a vote to impeach passes the House, the issue would go to the Senate. A trial would be presided over by the head of the Supreme Court, with the senators as jurors.
A two-thirds vote is needed in both chambers for an impeachment to be carried out.
Former Senate Vice President Orlando Parga said what Rosselló wrote in those leaked chats is derogatory and deeply offensive.
But he said matters of character should be judged at the polls next year.
Parga said if the governor is found to be involved in corruption, “he should step down immediately.”
“But for what has been revealed up to now, I don’t think … this is sufficient to force him out of power.”

‘We are going to stay here no matter what’ 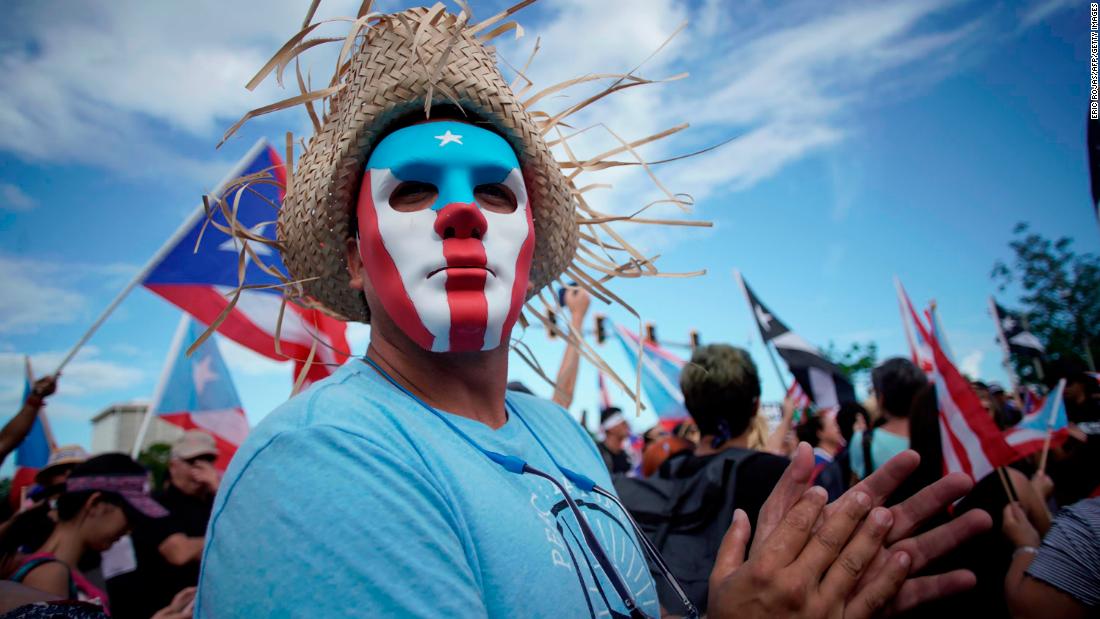 Protesters say they’re not backing down because they’ve endured political corruption, high poverty rates, crushing debt and a painful recovery since Hurricane Maria struck in 2017.
Layzne Alvez told CNN that Puerto Rico’s government had been “left to run wild with our economy, with our money, with all the federal funds the government are sending here.”
But Puerto Ricans aren’t a violent people, she said, so they don’t want to bring Rosselló down by force.
“We are going to stay here no matter what,” Alvez said. “We are going to force our local leaders, representatives, senators, whoever we need to, to get him out. We are going to stay here.”