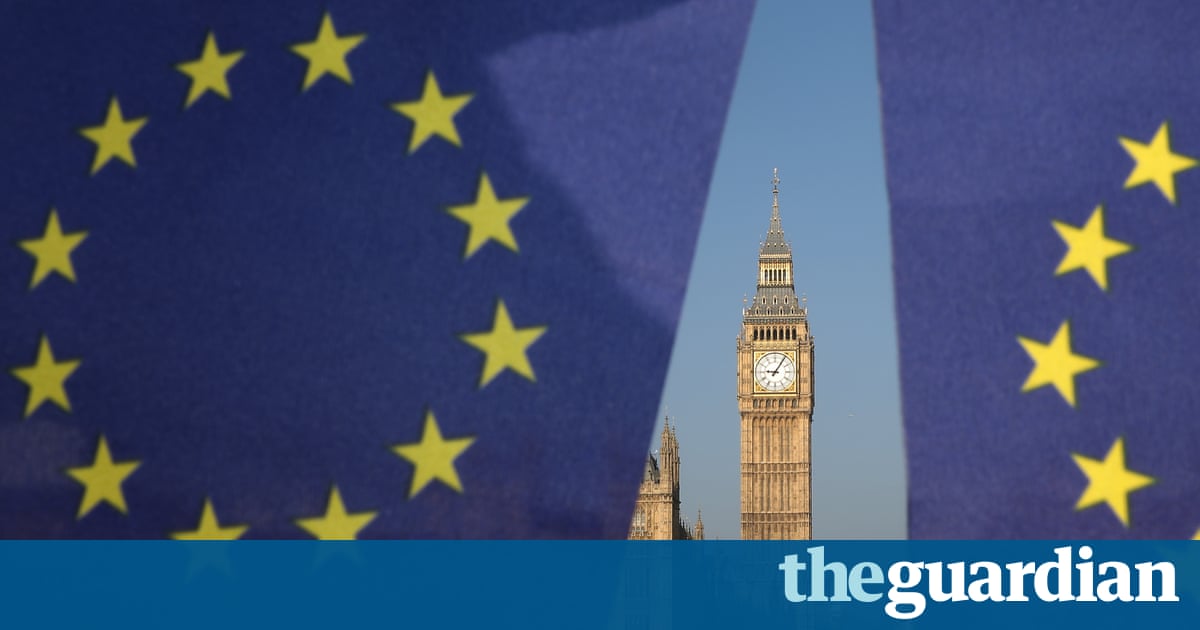 Britain could be forced to accept EU law, immigration controls and budget payments after it formally leaves the bloc in 2019 if it wants a transitional period to cushion the blow of Brexit, the EUs draft negotiating guidelines suggest.

Published by the European council president, Donald Tusk, the guidelines contained a number of demands that could be difficult for Theresa May to sell to the public and the pro-Brexit element of her party, including an extended transitional deal that could spill into a 2020 general election.

They offered a softened proposal to allow talks on Britains future relationship with the EU to begin after sufficient progress has been made on negotiating a withdrawal agreement, which would include settling the UKs bills and citizens rights.

But the EU also argued a trade deal could only be concluded once Britain had formally left and become a third country (a jurisdiction outside the European Economic Area), contradicting the prime ministers claim to be confident it can be completed before Brexit day on 30 March 2019.

The guidelines make clear the blocs primary objective is to preserve the integrity of the single market, which excludes participation based on a sector-by-sector approach.

Two senior UK sources with knowledge of Whitehall and Brussels said the document clearly suggested the EU only believed there would be a framework for a future trade deal ready by March 2019, and the actual negotiations would take longer.

This could necessitate some kind of transitional arrangement during which the UK would remain subject to the jurisdiction of the EU, which would be difficult for Theresa May to sell to the right of the Conservative party and the electorate going into an election in 2020.

The draft text says: To the extent necessary and legally possible, the negotiations may also seek to determine transitional arrangements which are in the interest of the union and, as appropriate, to provide for bridges towards the foreseeable framework for the future relationship.

Any such transitional arrangements must be clearly defined, limited in time, and subject to effective enforcement mechanisms. Should a time-limited prolongation of union acquis be considered, this would require existing union regulatory, budgetary, supervisory and enforcement instruments and structures to apply.

Rather than transitional arrangements, May and her Brexit secretary, David Davis, use the term implementation phase for a process which has been demanded by businesses to avoid taking the UK to an economic cliff edge on the day of departure. They would be likely to fight the idea of remaining under EU jurisdiction beyond the UKs formal exit from the EU.

Speaking as the EUs draft negotiating guidelines (pdf) were sent to national capitals on Friday, Tusk said the EU27 were united. Talks would be difficult, complex and sometimes confrontational but the bloc would not seek to punish Britain. Brexit itself is already punitive enough, he said.

The guidelines make clear it will be for the council to decide when sufficient progress has been made on the withdrawal deal, the priorities of which will include the rights of EU citizens in the UK and British citizens on the continent, and agreement on Britains legal and budgetary commitments and liabilities.

Tusk rejected the description of a Brexit bill and said it was simply a case of the UK having to pay for what successive British governments had signed up to fund. It is only fair towards all those people, communities, scientists, farmers and so on to whom we, all the 28, promised and owe this money.

The UKs only land border with the EU, between Northern Ireland and the Republic, will also be a key priority in the withdrawal deal, with the EU calling for flexible and imaginative solutions with the aim of avoiding a hard border.

Speaking alongside Tusk, Joseph Muscat, the prime minister of Malta, said the negotiations would undoubtedly be tough, but it will not be a war and the two sides needed to remain friends.

The draft guidelines may be revised over the next month, but are as likely to be strengthened as they are weakened. Tusk will chair a summit of EU27 leaders at the end of April to finalise the blocs negotiating position.

The European commission will then draft its more detailed negotiating directives, which are expected to be adopted at a meeting of European ministers on 22 May, after which formal talks between Davis and the EUs chief negotiator, Michel Barnier, can begin.

The guidelines say the UK must accept EU rules such as the four freedoms (including free movement), continuing budget contributions, and the judicial oversight of the European court of justice during a transitional period likely to follow its departure in 2019 and before any free trade pact can be finalised.

May has said Britain aims to leave the single market and most of the customs union in favour of agreeing a bespoke free trade deal for individual industrial sectors, such as the automotive and pharmaceuticals industries.

But a non-member cannot have the same rights and enjoy the same benefits as a member and there can be no cherry picking, the guidelines say. Separate negotiations between individual EU states and the UK are also ruled out.

The guidelines specify that any trade deal must be on a level playing field in terms of competition and state aid, with safeguards against unfair competitive advantages through fiscal, social and environmental dumping.

Downing Street sources said the the government was relatively relaxed about the guidelines, with one source saying there were no surprises really.
A No 10 spokesman said: These are draft guidelines and we look forward to beginning negotiations once they have been formally agreed by the 27 member states.
It is clear both sides wish to approach these talks constructively, and as the prime minister said this week, wish to ensure a deep and special partnership between the UK and the European Union.

But Owen Smith, the former Labour leadership candidate, said Tusks statement showed how Mays lofty rhetoric is colliding with hard reality. The guidelines underlined the difficulty the government would have in keeping its Brexit promises, he said.

Ministers and leave campaigners have presented Brexit as a cost-free option. It is not. There will be a cost to Brexit, we just do not know how deep it will be. It is time for the government to start levelling with the British people.

Barnier has said he hopes the main outlines of the withdrawal agreement will be clear by autumn, enabling a broad agreement to be reached at a summit in December.

He has said he hopes to start talks with the UK on a future relationship in January 2018. But there are lingering fears the talks could collapse. The draft text says the EU wants an agreement, but it will prepare itself to be able to handle the situation also if the negotiations were to fail.

A senior EU official said the European commission took little notice of Mays claim that no deal was better than a bad deal with the EU.