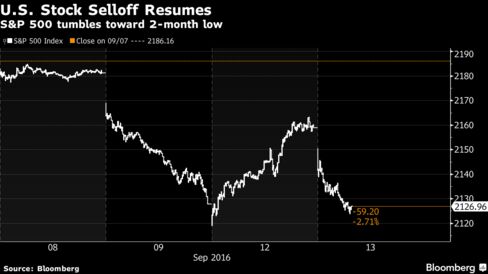 U.S. stocks retreated with sovereign debt, while a plunge in crude oil spurred gains in the dollar as investors calibrated expectations toward prospects of less global monetary stimulus.

The S&P 500 Index fell to its lowest level since July 7 as Mondays rebound was overwhelmed by declines in all 10 main industry groups. The CBOE Volatility Index surged 18 percent to the highest since June, while Apple Inc. was the only member of the Dow Jones Industrial Average to rise. Treasuries tumbled, propelling yields on 10-year notes to their highest point in almost three months. U.S. crude slid below $45 a barrel on speculation a glut will persist. Mexicos peso led losses among emerging-market currencies.

Equities have been whipsawed over the past three days following an unprecedented stretch of calm. Investors remain on edge over the ability of central banks to fuel economic and price growth, amid concern they are questioning the role of stimulus. For the second time since Friday, stocks and bonds sold off together and gold also fell, leaving investors few places to hide. Oil joined the rout after the International Energy Agency predicted that the supply glut will extend into next year, punishing the currencies of resource exporters.

The markets have become dominated by central banks, not just here in the U.S. but globally, thats the dominating force across all asset classes, said Bret Chesney, senior portfolio manager at Austin, Texas-based Alpine Partners. When these central banks dont move, people start to have fear that their stability factor — which has been central bank policy — may be diminished or gone.

The uptick in volatility comes after fund managers increased cash levels this month amid bearish views on the markets, according to a Bank of America Corp. survey. The percentage of investors saying both equities and bonds are overvalued climbed to a record, while stock allocations relative to cash fell to around the lowest level in four years, the survey found.

The S&P 500 slid 1.5 percent to 2,127.02 as of 4 p.m. in New York, paring a drop of as much as 1.8 percent after the index touched its average price over the past 100 days. The index rallied 1.5 percent Monday, rebounding from a 2.5 percent rout in the previous session that shattered a stretch of tranquility that saw the gauge post no moves of more than 1 percent for 43 straight days.

Investors also continue to wrestle with extended valuations, given companies in the S&P 500 are forecast to post a sixth consecutive quarterly decline in profits. The index trades at 18.4 times estimated earnings, the most expensive level since 2002. The Dow Average slipped 1.4 percent, while Apple gained 2.4 percent.

The IEA-sparked rout in oil sent emerging-market assets lower for a third day, with stocks and currencies extending losses following the worst selloff since June. The MSCI Emerging Markets Index fell to its lowest point since Aug. 4.

Futures on Asian equity indexes foreshadowed further declines in the region, with contracts on Japans Nikkei 225 Stock Average down 0.5 percent in Osaka. Futures on benchmarks in Australia, South Korea and Hong Kong dropped at least 0.2 percent.

The probability of a rate hike at next weeks Fed Open Market Committee meeting dropped by eight percentage points on Monday to 22 percent, futures prices indicated.

Longer-dated securities, which have been outperforming in recent months, led losses. The difference between yields on Treasuries due in two and 30 years — a measure of the yield curve — widened to 166 basis points, the most on a closing basis since June 30. Money mangers upped their cash hoard to 5.5 percent, according to the September survey by Bank of America, near the most since November 2001. A record 54 percent of survey respondents said stocks and bonds are overvalued.

The U.S. Treasurys $12 billion auction of 30-year bonds Tuesday drew a yield of 2.475 percent, above the level indicated in pre-sale trading. The bid-to-cover ratio, at 2.13, is down from 2.33 in the last 10 sales, signaling weaker demand.

The Bloomberg Dollar Spot Index, a gauge of the greenback against 10 major peers, jumped 0.7 percent, erasing its decline from Monday. The yen weakened 0.7 percent versus the dollar, having surged 0.8 percent the previous day as Brainard said the case for Fed tightening was less compelling.

The pound retreated the most in five weeks after a report showed U.K. inflation undershot analyst forecasts. The data again brought into focus the uncertain economic outlook after Britain voted to leave the European Union more than two months ago.

West Texas Intermediate crude slumped 3 percent to settle at $44.90 a barrel in New York. World stockpiles of oil will continue to accumulate through 2017, a fourth consecutive year of oversupply, due to declining demand in India and China, the IEA said.

OPEC also revised up its projections for rival supplies in 2017, predicting an increase in output from outside the group before major producers meet in Algiers for talks later this month. U.S. data due Wednesday is forecast to show the countrys oil inventories rose by 4 million barrels last week, which would be the biggest increase since April.

Inventories remain high, theyre well above five-year trend levels, said David Lennox, a resources analyst at Fat Prophets in Sydney. The market is just waiting to see what happens at the OPEC meeting. If there is a concrete deal and its actioned, wed expect to see prices rally.

Gold also fell, with bullion for immediate delivery down 0.7 percent to $1,319.05 an ounce, touching a 1 1/2-week low. The precious metal has declined for five sessions, its longest run of losses in almost a month.

Geoffrey the Giraffe Was Left for Dead. Now Hes on the Mend in a Childrens Hospital.