Going by the reaction in China, you would’ve thought global markets were in for a thrashing after President Donald Trump’s latest belligerence on trade. And while a few cracks widened, in the end it was another muffled reaction in U.S. stocks.

For the S&P 500 Index, declines that swelled past 1.5 percent in overnight futures trading shrunk to one-third of that by session’s end. The technology-heavy Nasdaq Composite Index was down just 0.3 percent. Only the Dow Jones Industrial Average suffered notable damage, falling 1.2 percent due to losses in high-priced stocks Caterpillar Inc. and Boeing Co.

The question of why American equities keep skating past a worsening trade conflagration has been baffling for strategists. One simple explanation is positioning. For all the drama landing at their doorstep, U.S. investors won’t stop plowing money into bullish trades.

“We’ve had more negative catalysts and more negative pull this year than we’ve had for a long time, but the positives continue to prevail in the investor’s mind,” Jeff Carbone, a managing partner at Cornerstone Wealth in North Carolina, said by phone. “They’re shrugging off the negativity and taking the positive to a greater extent that this is not the end.”

It’s visible in manager surveys, which last week showed equity funds only a trifle less long than at the height of January’s euphoria. It’s in markets for call options, where individual investors are engaged in a buying binge of historic dimensions. It’s in tech IPOs, stocks favored by short sellers, and ones with shaky balance sheets, all of which recently surged. 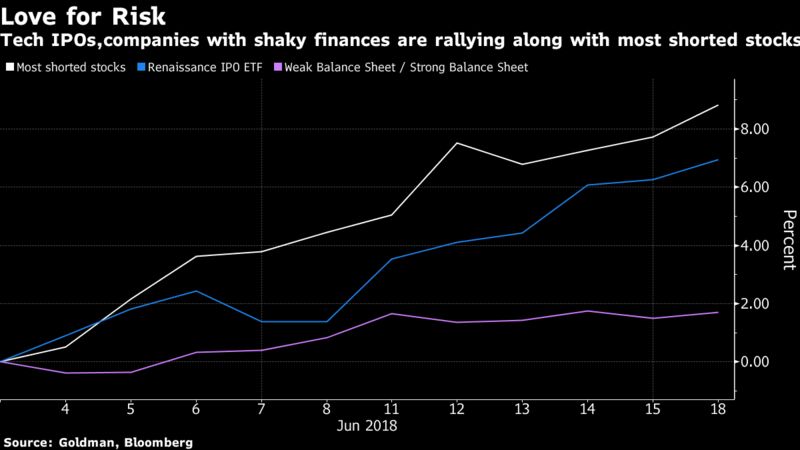 For traders so inclined, each trauma is just another test, even as their frequency quickens. In Tuesday’s version, the Dow Jones Industrial Average fell for a sixth day, the longest streak since March 2017, but the Russell 2000 Index reached an all-time high and the FANG block of tech giants rose to another record.

Contrast that with the situation in China, where benchmarks plummeted almost 5 percent and one in four stocks fell the maximum 10 percent Tuesday amid concern a trade war will act as a brake on the economy. U.S. stocks have beaten the rest of the world this year, as tax cuts boosted earnings, making the country a haven at a time when turbulence erupted from emerging markets to Europe.

It’s not like people haven’t been warned. They have their memories of February and March, and strategists at banks like Morgan Stanley and Goldman Sachs Group Inc. have repeatedly urged investors to rein in optimism, citing everything from politics to peak earnings and monetary tightening. Earlier today, Citigroup Inc. flagged a potential bubble in growth stocks.

But the caveats have gone unheeded. In one example, smaller options investors, defined as those who typically trade 10 contracts or fewer in one transaction, last week purchased more than 4.5 million calls, an amount that before this January was unprecedented in records going back to 2000, data compiled by Sundial Capital Research Inc. showed.

While the rush to bet on higher share prices has helped the market stay buoyant this month amid an interest-rate increase from the Federal Reserve and growing trade tensions, it also sets up bulls for pain should things quickly reverse in coming months.

“This is fine for now, but we think by year end such a ‘risk on’ hierarchy will be misplaced given the more uncertain outlook posed by ‘peaky’ growth rates and ever tightening financial conditions,” Mike Wilson, chief U.S. equity strategist at Morgan Stanley wrote in a note to clients Monday. He urged investors to go defensive in anticipation of a rotation out of companies whose growth is tied to economic growth and upgraded utility stocks. 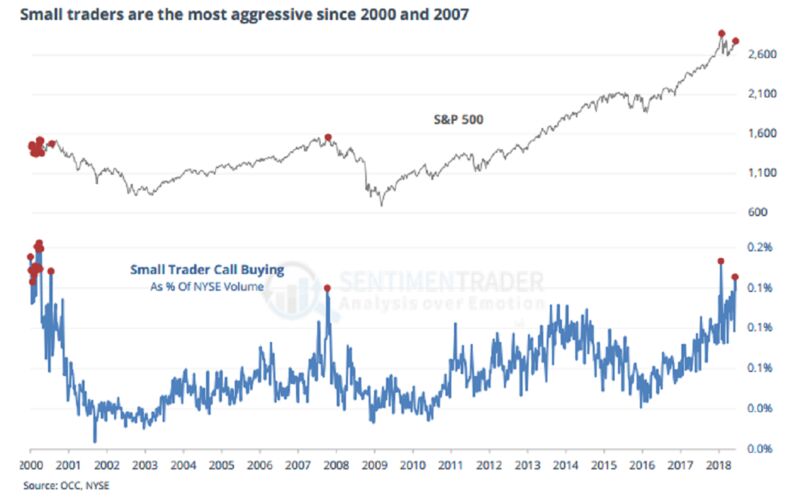 Wilson isn’t alone among analysts who see trouble brewing. The rally in growth stocks brought flashbacks of the internet bubble to Citigroup strategists led by Robert Buckland, even as valuation premiums are less than half of those from almost two decades ago. A collapse would bode ill for a market whose gains have been increasingly anchored on tech giants such as Amazon.com Inc. and Facebook Inc.

“Price action of the U.S. growth/value trade looks ominously similar to late 1999,” the strategists wrote. “Watch out for a growth bubble.”

Bulls have been unfazed, emboldened — as always — by a bedrock of earnings expectations that keeps getting stronger. Estimates compiled by Bloomberg show equity analysts see S&P 500 profits rising 24 percent in 2018 then 10 percent in each of the next two years.

Numbers like those make it easier to bid up companies that recently went public and those with weaker finances. An exchange-traded fund that tracks newly listed stocks, the Renaissance IPO ETF, last week posted its second-best gain this year, while a Goldman Sachs basket of companies with flimsier finances outpaced a collection of its stronger counterparts.

To Matt Lloyd, chief investment strategist at Advisors Asset Management, all the anxiety over geopolitical turmoil will eventually fade.

“People, rightfully so, are just basically saying this could happen, that could happen, but those are 30 or 40 really bad decisions in a row that have to happen for those to come to fruition,” he said. “We always confuse hiccups for heart attacks when we’re adjusting to the news — just what could happen versus what does happen usually.”

As bulls press ahead, bears have been retreating. A Goldman basket of 50 heavily shorted companies jumped more than 3 percent last week. In the options market, small traders have reduced their bearish wagers. As a result, more than two calls were bought for each put, one of the highest ratios on record, Sundial data showed.

While options are often employed as hedging tools by large speculators, small traders typically use them to make direct bets on market directions, said Jason Goepfert, president of Sundial Capital. The latest buying of calls stood out in a market where broad equity trading remained anemic, triggering a spike in its ratio as a percentage of NYSE volume.

Coincidentally or not, such indications of retail euphoria flared up in January, just before the S&P 500’s first 10 percent correction in two years. It also accompanied the bull market peaks in 2000 and 2007.

“What’s most remarkable about the jump in call volume is that it comes during a time of overall suppressed volume,” Goepfert said. “That doesn’t exactly seem like a good sign.”

With the price of call options now trading above their historic average, investors should sell them to reap extra returns in a market whose upside appears limited with valuations stretched, according to Rocky Fishman, an options strategist at Goldman Sachs. The firm predicted the S&P 500 will end next year at 3,000, or an 8 percent increase from the last close. That’d be below the 45th percentile in the index’s history over any 18-month period.

“The potential for upside surprises in U.S. equities is lower than the compensation received from elevated call prices,” he wrote in a note.