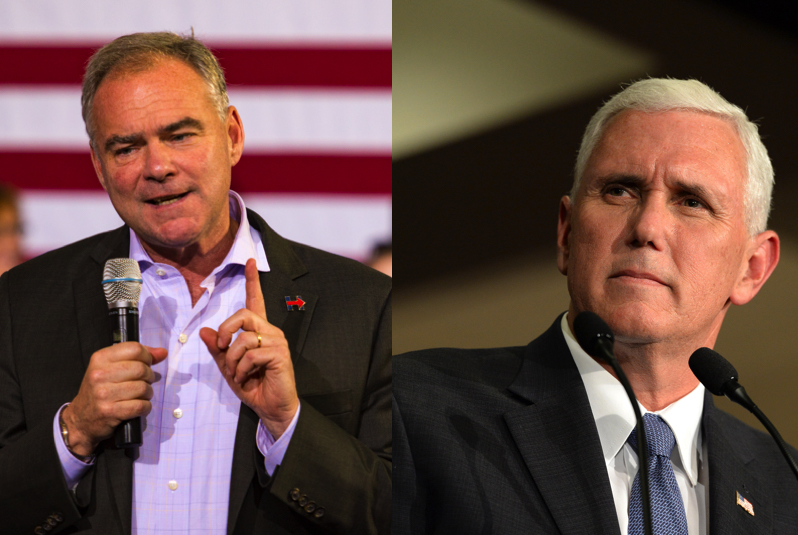 On Tuesday night, professional White Male Politicians Tim Kaine and Mike Pence faced off in the Vice Presidential Debate, which is essentially lifes biggest consolation prize. The debate was at Longwood University, which weve never heard of but apparently its in Virginia so who gives a fuck anyway.

Instead of the traditional podium setup, which we didnt think was causing any problems, the two veeps sat at a desk with the moderator on swivel office chairs, which seems less like a debate and more like an uncomfortable meeting that youre not allowed to text at.

Things started out on an intense note, with the first question being about why the fuck either of them is qualified to be President if something happens. They both gave nice, rehearsed, boring answers, but Mike Pence fucked his up by getting the name of the host university wrong in his first sentence. Aaaand none for you Mike Pence bye.

Within fifteen minutes, there were more interruptions going on than a limo fight on , and poor nicegirl moderator Elaine Quijano was in 150% over her head. At one point she grew some balls and used her angry teacher voice, but literally no one cared. This debate was supposed to have more of an open conversation format, which basically just means both of them were trying to talk for as much of the 90 minutes as possible. Sound like a shit show? Bingo!!

There was an especially fun part about guns and law enforcement, which included both candidates repeating memorized stories about tragic deaths, and lots of ignoring common sense, because politics!! After that Tim Kaine repeated a bunch of direct racist/sexist Trump quotes, which Pence dismissed as an avalanche of insults, which sounds like a solid title for a future book, so thanks for the idea.

Tim Kaine is about as imposing as a stoned Berenstain Bear, but he did his best to trash Donald Trump and Mike Pence like a good, sane person. His best burn came when he was talking about how his opponents love Putin, and told Pence that he needs to go back to a fifth grade civics class. Mike Pence said he was offended, but this isnt fucking amateur hour so no one cares about his feelings.

Tbh the best moment came right at the end when they were both asked about their religious views, and Mike Pence said heUs too, Mike, us too. The rest of the debate was basically arguing and avoiding questions, which youll get another 90 minutes of at next Sundays 2nd Presidential debate.

26 Actors Who Paid A Terrible Price For A Role

Why Colton Underwood And Rachel Lindsay Are Feuding | Betches

Everything I Wish I Knew About Freezing My Eggs | Betches

This Influencer Is Accusing Kylie Of Copying Her Naked Pic · Betches