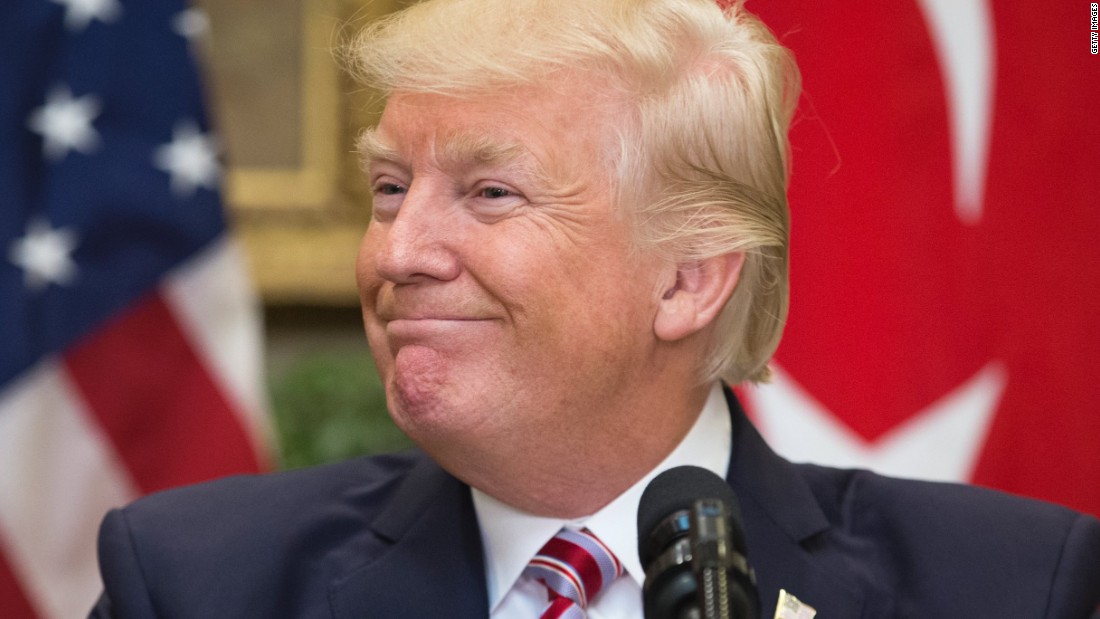 Washington (CNN)Donald Trump has been president for 278 days. Very, very few can be described as — all in all — good days for him.

Yes, the day started with an extended Twitter fight between Trump and Tennessee Sen. Bob Corker that dominated cable TV headlines for much of the morning. But, then things started to take a very pro-Trump turn:
* Republican senators emerged from their lunch with the President all smiles. They insisted his message — on tax reform, on judicial nominees, on, well, everything — had been extremely well received. (Trump later tweeted — 3 times! — that he has been given a standing ovation.)
* Arizona Sen. Jeff Flake not only announced he was retiring but also acknowledged that it would have been very difficult for him to win a Republican primary. Trump had repeatedly criticized Flake after the Arizona Senator wrote a book excoriating Trump and the GOP who welcomed him with open arms. Trump went as far as to chat with potential primary challengers to Flake — and former Trump chief strategist Steve Bannon was actively working with Flake’s main primary opponent.
* House Republicans announced not one but two congressional probes into the Obama administration and Hillary Clinton. One deals with the FBI’s handling of the investigation into Clinton’s private email server while she served as Secretary of State. The other is focused on a 2010 uranium deal with Russia that involves Clinton Foundation donations even as Clinton was the nation’s chief diplomat.
* The Washington Post reported that the infamous Trump dossier prepared by former British spy Christopher Steele has been funded — at least in part — by Hillary Clinton’s 2016 presidential campaign and the Democratic National Committee. (CNN had previously reported Clinton supporters had funded the dossier research for at least part of its existence but hadn’t pinned it directly back to Clinton’s campaign and the DNC.)
None of the above is to say that Trump scored a perfect 10. He — and, in his defense, most politicians — rarely do. The presidency — especially in the age of wall-to-wall cable TV and social media — is an impossible job to get right every (or any) day.
And, Trump’s feud with Corker — not to mention the Wall Street Journal reporting that the Manhattan district attorney’s office is looking into former Trump campaign chairman Paul Manafort — are clearly problematic.
Nor does it mean that Trump’s Tuesday might not be less of win when viewed in the medium to long term. It’s possible, for example, that Flake’s speech on the Senate floor triggers a broader revolt against Trump within the governing wing of the GOP.
“Well I’m not here to describe a private meeting, I can just say that a lot of my colleagues share the concerns that I raised on the floor yesterday, and I believe that more of them will speak out in the future,” Flake said about the Senate GOP’s Tuesday lunch in an interview with CNN’s “New Day” Wednesday. “I hope that we have reached a tipping point of some type, where we don’t continue to normalize, by being silent, the kind of behavior that we’ve seen. That’s why I felt it was important to give the speech, and I hope that we move in a different direction.”
Maybe!
But, for a President who has seen 10 times as many bad days as good ones, Tuesday falls into the latter category for now.
The big picture takeaway from Tuesday for people paying only loose attention — which is most people — is that Republican politicians who cross Trump lose. That Flake’s decision to write a book in which he bashed Trump led Arizona Republicans to turn away from him to the point where his poll numbers suggested he couldn’t win.
For Trump — and former White House chief strategist Steve Bannon — Flake can be pointed to as a cautionary tale for any elected Republican who is weighing whether to break with Trump. The message is: Do it and lose.
The developments on Capitol Hill on Tuesday mean that something other than stories about the ongoing investigations into Russia’s attempted meddling in the 2016 election will be coming from Congress. And that the focus of these stories will be on two things the Republican base hates: Hillary Clinton and the Obama administration.
Finally, the news that Clinton’s campaign and the DNC helped to fund the research into the Trump dossier allows the President to muddy the waters about the ongoing special counsel investigation into Russia. It’s proof, he will argue, that this whole Russia story was a hoax! And a partisan witch hunt!
“Watergate, modern age,” is how Trump described the latest developments on the dossier as he left the White House Wednesday en route to a fundraiser in Texas.
Now. For anyone who has closely followed the Trump presidency, you know that it’s a day-to-day thing. As in: Yesterday isn’t predictive of today and today doesn’t tell us much about tomorrow. (Witness: Trump’s all-over-the-place Q and A session with reporters on the White House lawn Wednesday.)
But, a good day is a good day. And Tuesday was one for Trump.