Fiona Hill, Alexander Vindman, Marie Yovanovitch and more stand against the rot in the White House. They must be saluted 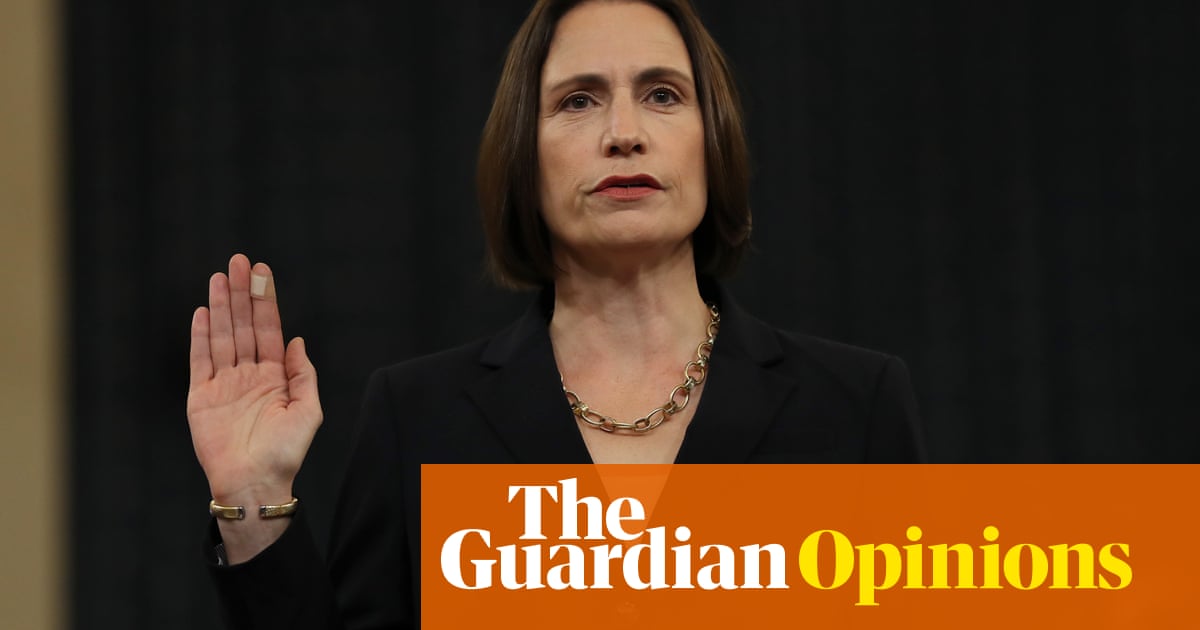 As a candidate in 2015, Donald Trump said he would surround himself “only with the best and most serious people”.

On 15 November, Trump’s longtime friend and confidant Roger Stone was found guilty of lying to Congress, tampering with a witness and obstructing a congressional investigation into Russian interference in the 2016 election. He faces a maximum of 50 years in prison.

Stone will be only the most recent in a long line of Trump cronies to go to jail.

This list doesn’t even include the Star Wars cantina dredged up by Rudy Giuliani to pressure Ukraine to investigate Joe Biden and his son, including Lev Parnas and Igor Fruman, both of whom were recently arrested on campaign finance charges.

Not to mention Trump senior adviser Stephen Miller, whose released emails reveal the warped mind of a racist nationalist.

Trump has surrounded himself not with the best and most serious but with the worst and most dangerous: thugs, liars and white supremacists.

And yet in recent weeks, others in the Trump administration have shown themselves to be among the best and most honorable public servants in America, though Trump doesn’t see them that way.

I’m talking about the career officials who have come before the House intelligence committee and, with dignity and restraint, confirmed Trump’s abuses of power.

Lt Col Alexander Vindman explained that he reported Trump’s 25 July phone call seeking Ukrainian president Volodymyr Zelenskiy’s help in digging up dirt on Biden “out of a sense of duty”, because it was “improper for the president of the United States to demand a foreign government investigate a US citizen and political opponent”.

National Security Council officer Fiona Hill, after referring to her “legal and moral obligation” to appear before Congress, detailed how Trump’s team carried out a “domestic political errand” that helped Russia, and warned that Republicans play into Russia’s hands by denying its role in the 2016 election. Russia is “right now” seeking to interfere in 2020, she said, and “we are running out of time to stop them”.

All these men and women have distinguished records of public service. Some are highly decorated military officers. In coming forth, they have shown remarkable courage and patriotism.

Yet, true to form, Trump and his lackeys attack them.

During Yovanovitch’s testimony, Trump tweeted that “everywhere Marie Yovanovitch went turned bad”, blaming her for a civil war in Somalia that started before she was posted there.

When Vindman testified, the White House tweeted that his former boss had concerns about his judgment.

Republican senator Ron Johnson said Vindman “fits the profile” of “bureaucrats” who have “never accepted President Trump as legitimate”. Fox News accused him of having “dual loyalties” and committing “espionage” because he fled what is now Ukraine with his family, when he was three years old.

Even before she appeared, Trump called Williams a “Never Trumper” who should work out a “better presidential attack!” She had barely left the hearing room when the White House issued a statement challenging her credibility.

Those who put loyalty to Trump above their duty to the United States are contemptible. Even if they don’t end up in prison like other Trump toadies, they have dishonored themselves and the nation.

But those who have devoted their lives to this country and are now risking everything by telling the truth are among America’s best. They deserve our deepest gratitude.

To me, Vindman’s opening statement said it all.

“Dad, my sitting here today, in the US Capitol, talking to our elected officials, is proof that you made the right decision 40 years ago to leave the Soviet Union and come here to the United States of America, in search of a better life for our family. Do not worry – I will be fine for telling the truth.”