Trumps recognition of Israeli rule over the Golan Heights could pave the way for Israels annexation, in part or whole, of the West Bank a long time talking point on the hard right 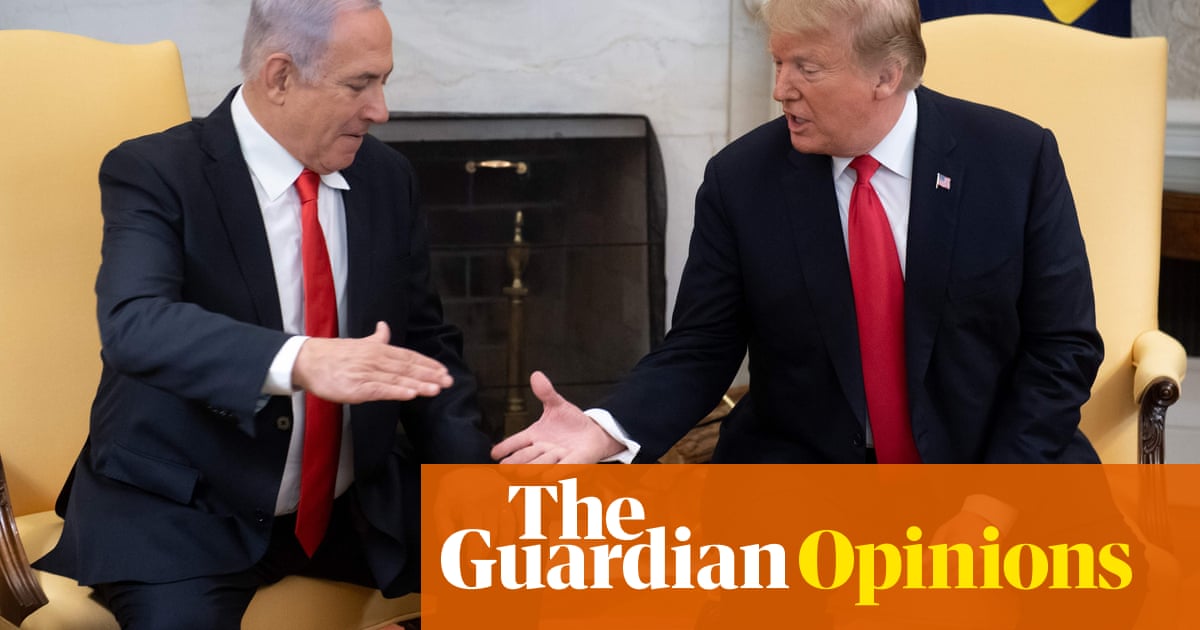 No country in the world recognizes Israel’s rule over the Golan Heights, occupied by Israel in 1967 and unilaterally annexed in 1981 – no country, that is, until now.

Donald Trump signed a presidential proclamation on Monday formally recognizing Israeli sovereignty over the Golan Heights, still considered Syrian territory under international law. Standing by President Trump’s side during an address by the two heads of state in Washington DC, the Israeli prime minister, Benjamin Netanyahu, reportedly called Trump’s decision “historic justice” and gifted the president a box of wine from the occupied territory. As they embraced, Israeli forces began an aerial bombardment of the besieged Gaza Strip after rockets launched from Gaza hit a house in a community north of Tel Aviv earlier that day.

Trump’s announcement is unmistakably an election-time favor for Netanyahu. Saddled with multiple corruption charges, including one for bribery, Netanyahu and his Likud party have been flagging in the polls. Likud increasingly appears threatened by the center-right Blue and White party, jointly headed by the taciturn retired general Benny Gantz and former TV personality Yair Lapid. Netanyahu’s desperation can be measured by the extremity of his rhetoric. He and his surrogates have spent the past several weeks waging a hateful, vicious campaign, accusing the Arab political parties of supporting terrorism and explicitly warning that a Gantz and Lapid victory would lead to dead Israelis.

Many in Israel, however, view Netanyahu, despite his flaws, as a talented statesman and skilled advocate for the country’s interests on the international stage, and Netanyahu has campaigned on achievements such as normalizing relations with the Gulf states and the US embassy’s move from Tel Aviv to Jerusalem. The Golan Heights declaration – which initially took even the secretary of state, Mike Pompeo, who was in Israel at the time, by surprise – is likely meant to bolster this image.

But Trump’s Golan Heights proclamation is not just a cynical political gambit. It is a dramatic change in US policy in the Middle East that could have serious consequences. Trump, unlike his predecessors, has never even pretended to abide by international norms and conventions. And yet the decision to recognize Israeli sovereignty over territory that the international community nearly unanimously considers occupied, or at the very least disputed, is unprecedented.

It gives a formal US stamp of approval to Israel’s violation of international law, and, in particular of the Fourth Geneva Convention, which prohibits an occupying power from transferring its civilians into occupied territory. Roughly 20,000 Israeli settlers live in the occupied Golan Heights today – now with the unambiguous backing of the US government.

This potentially paves the way for Israel’s annexation, in part or whole, of the West Bank. It has long been a talking point on the Israeli hard right that, despite the international community’s protestations, there would be few consequences for extending Israeli sovereignty over the West Bank. Trump’s declaration, it seems, has not only proven them right, but given them an added boost: unlike during the Obama years, they can be confident that the global hegemon will take their side.

If Netanyahu’s Likud wins enough seats on 9 April to form a government, it is very like that annexation, at the very least, will be on the table for discussion. The Likud’s central committee unanimously voted in 2017 in favor of annexing the West Bank. Naftali Bennett, co-chair of the New Right party, has proposed a plan to annex parts of Area C of the West Bank. And the other rightwing parties – the extremist Union of Parties of the Right and Moshe Feiglin’s Identity party, both of which would almost certainly sit in a future Likud government – have only more extreme proposals for dealing with “the Palestinian question”, including the forced transfer of Palestinians out of the West Bank and into Jordan.

Trump’s recognition of the Golan Heights marks the total capture of US policymaking in the Middle East by pro-Israel right. US ambassador to Israel David Friedman is an opponent of the two-state solution who previously operated the charitable arm of a rightwing orthodox religious seminary in the West Bank settlement of Beit El. Jared Kusher’s family is so close Netanyahu that the prime minister once slept in Kushner’s childhood bedroom. Between the Trump administration’s personnel and rightward lurch in Israeli politics, the pieces that would make the current one-state reality permanent are rapidly falling into place.

It is important to remember this in light of the glitz and pablum of the AIPAC policy conference taking place this week in Washington DC, where the PR hacks and policy flacks are working hard to launder Israel’s image, to obscure the fact that there is one sovereign state between the Jordan River and the Mediterranean Sea that determines the lives of roughly 13 million people; that of those 13 million, only half – Israeli Jews – have full citizenship and social rights; and that the other half, the Palestinians, live under a range of discriminatory systems, from codified discrimination but legal citizenship within Israel, to residency without the right to vote in East Jerusalem, to military dictatorship in the West Bank. Donald Trump, his administration, the pro-Israel lobby, and Netanyahu all intend to keep it that way.