President Donald Trump’s threat to hit North Korea with “fire and fury” jolted markets from New York to Seoul even as U.S. lawmakers questioned the president’s willingness to back up the heated rhetoric.

“North Korea best not make any more threats to the United States,” Trump told reporters in Bedminster, New Jersey, on Tuesday. “They will be met with fire, fury and, frankly, power the likes of which this world has never seen before.” 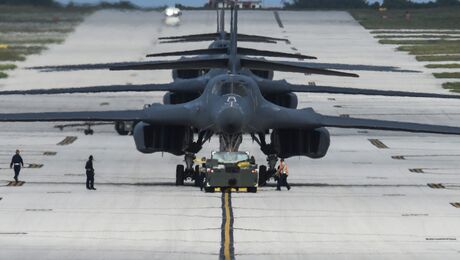 Trump’s remarks came as North Korea — reacting to new United Nations sanctions against its nuclear weapons program — warned the U.S. would “pay dearly” and said it was examining plans to fire a missile toward an American military base on Guam. The exchange followed a Washington Post report, citing a Defense Intelligence Agency analysis, that Pyongyang successfully developed a nuclear warhead to use on its missiles.

“He has been very threatening, beyond a normal statement,” Trump said of Kim.

While global powers and financial markets have long been accustomed to over-the-top rhetoric from North Korea, the U.S. has traditionally taken a more diplomatic stance. Trump’s suggestion he might meet Kim’s threats with action startled markets and prompted a renewed focus on the narrowing list of military and economic options available.

The S&P 500 Index fell to session lows Tuesday, and the CBOE Volatility Index jumped 11 percent after Trump spoke. The comments jolted markets from a summer slumber, with U.S. assets largely little changed for most of the session.

South Korea’s benchmark Kospi fell 1.1 percent to the lowest since June 21, while the won fell the most in three weeks. Japan’s Topix index had the biggest slide in almost three months. 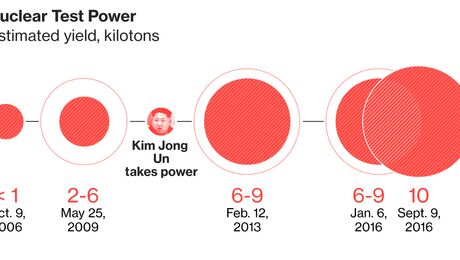 Whether the president first consulted with allies, the Pentagon or other government agencies was unknown. It also wasn’t clear whether Trump’s “fire and fury” threat described a conventional strike or one involving nuclear weapons.

The Defense Department offered no explanation. “We remain prepared to defend ourselves and our allies and to use the full range of capabilities at our disposal against the growing threat from North Korea,” Pentagon spokesman Johnny Michael said in an email. North Korea has routinely used bombastic rhetoric to threaten the U.S., including military bases in Guam, Hawaii, Japan and South Korea.

South Korea said on Wednesday it was monitoring for any additional moves by North Korea, and would continue to push for peace. An official at the presidential office in Seoul told reporters that there’s no “imminent crisis,” Yonhap News Agency reported.

“We are working to fundamentally resolve the North Korean nuclear and missile issues at the earliest date possible, and are working with a belief that the possibility is very high,” Yonhap reported, without identifying the official. 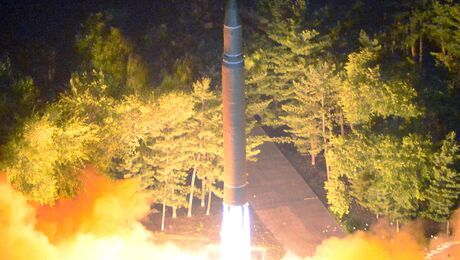 The U.K. said it will work with the U.S. to counter the threat from North Korea. “We have been consistently clear and forthright in our condemnation of North Korea’s destabilizing and illegal behavior,” the Foreign Office in London said in an emailed statement. The German government warned against “escalating rhetoric,” with Foreign Ministry spokesman Martin Schaefer telling reporters in Berlin that “a military course of action cannot be a solution.”

North Korea’s reported progress on miniaturizing nuclear warheads — coupled with two test flights of intercontinental ballistic missiles in July — is raising pressure on Trump. Before taking office, he pledged to prevent North Korea from developing an ICBM: “It won’t happen,” he wrote on Twitter.

With his latest comments, Trump “runs the risk of entrapping” himself in his own rhetoric, said Scott Snyder, director of the program on U.S.-Korea policy at the Council on Foreign Relations. “If he pursues that, it’s hard for me to see how it can accomplish anything positive,” he said.

Senator John McCain, the Republican chairman of the Senate Armed Services Committee, said Trump should be more cautious because he may not be able to make good on the threat.

“The great leaders I’ve seen don’t threaten unless they’re ready to act, and I’m not sure President Trump is ready to act,” McCain said in an interview on Phoenix radio station KTAR. “It’s the classic Trump, in that he overstates things.”

Just days ago, Trump was praising the UN Security Council’s unanimous decision to tighten sanctions on North Korea, targeting about $1 billion of the nation’s approximately $3 billion in exports. Some analysts say those measures are too little, too late to slow Kim’s momentum.

While Kim’s efforts to develop a missile capable of delivering a nuclear weapon to the continental U.S. face big technological hurdles, he has made significant progress. He still needs a rocket that can survive reentry and a guidance-and-control system capable of directing it to the U.S. without breaking up.

North Korea views nuclear weapons program as a means to win respect and eliminate a potential threat to the Kim dynasty, which has ruled for three generations.

“We will, under no circumstances, put the nukes and ballistic rockets on negotiating table,” the state-run Korean Central News Agency reported on Monday. “Neither shall we flinch even an inch from the road to bolstering up the nuclear forces chosen by ourselves, unless the hostile policy and nuclear threat of the U.S. against the DPRK are fundamentally eliminated.”

Trump’s latest statement comes as Secretary of State Rex Tillerson visits allies in Southeast Asia, rallying support for tougher measures against Pyongyang while holding out an olive branch to the reclusive regime. Tillerson was in Thailand and heads to Malaysia on Wednesday.

“We hope, again, that this ultimately will result in North Korea coming to the conclusion to choose a different pathway, and when the conditions are right that we can sit and have a dialogue around the future of North Korea so that they feel secure and prosper economically,” Tillerson told reporters in Manila on Monday.

The focus on sanctions has continued because the military options are all so grim. Seoul’s 10 million residents live just 35 miles (56 kilometers) south of the border — well within North Korea’s artillery range.

Australian Prime Minister Malcolm Turnbull said on Wednesday the threats to the region were coming from North Korea and called on the regime to back down.

“A conflict would be shattering,” Turnbull said. “It would have catastrophic consequences.”