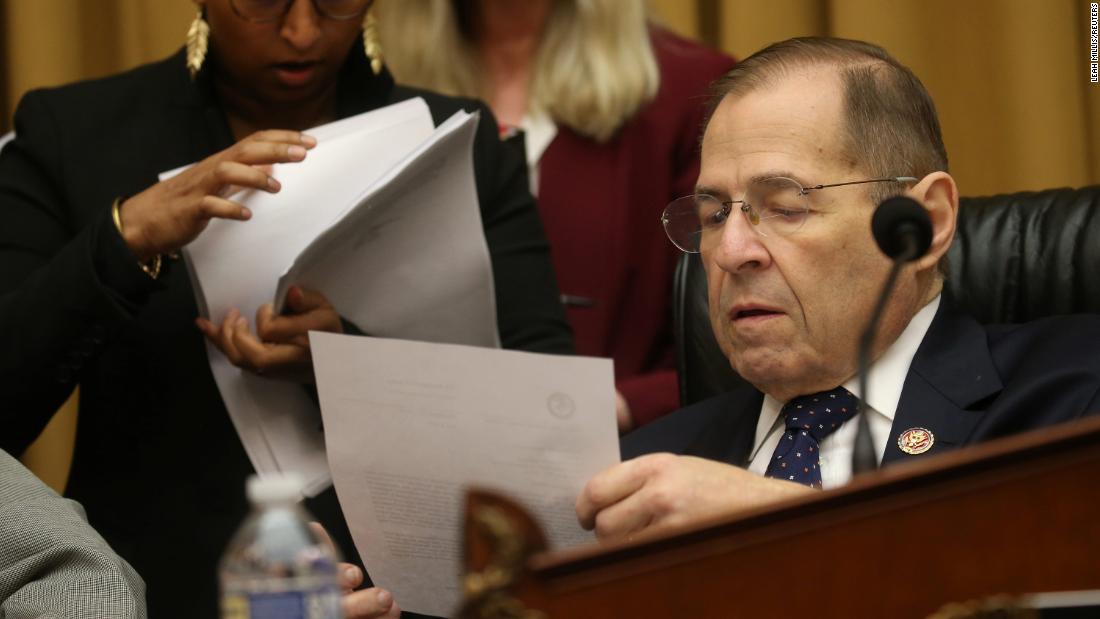 Washington (CNN)The constitutional showdown between President Donald Trump and House Democrats is taking a grave new twist that threatens to embroil the nation in a deep political and legal nightmare that could last for years.

His sweeping assertion of executive privilege over the entire Mueller report on Wednesday intensified the most serious standoff between Congress and the White House in decades and opened a hugely significant new battle over the nature of US democracy.
The move followed broad and repeated efforts by the administration to thwart congressional oversight, for example, by ignoring subpoenas for documents and testimony by current and former officials.
On Wednesday it also emerged that the Republican-led Senate Intelligence Committee is deadlocked with the President’s eldest son, Don Jr., who has been subpoenaed to return to the panel to testify. 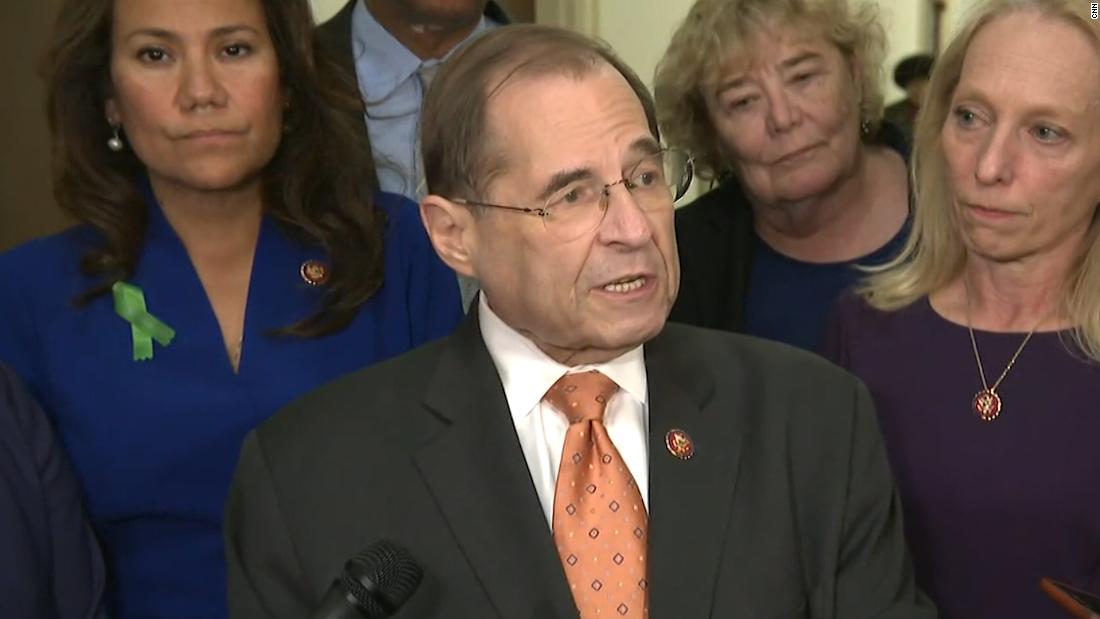 Nadler: Barr won’t testify because he is terrified

But while Washington is consumed by the confrontation, polls and anecdotal evidence suggest indifference among many Americans about the momentous goings-on in Washington, which so far are not resonating much outside the capital.
A strong economy, extreme political polarization and the daily struggles of millions of people to pay for essentials like health care and a college education are understandably seen as more important.
This is one reason why Democrats, many of whom believe there is more than enough material to impeach Trump, are wary of taking that ultimate step; most voters do not seem to want an impeachment saga.
And any impression in the heartland that the latest drama is just another tortured episode in an era of political estrangement would have been reinforced by the theatrics in the House Judiciary Committee on Wednesday.
A hearing in which Democrats held Attorney General William Barr in contempt pulsated with enough grandstanding and hypocrisy on both sides to turn anyone against politics — and in atmosphere, rather than substance, looked like business as usual in the divided capital. 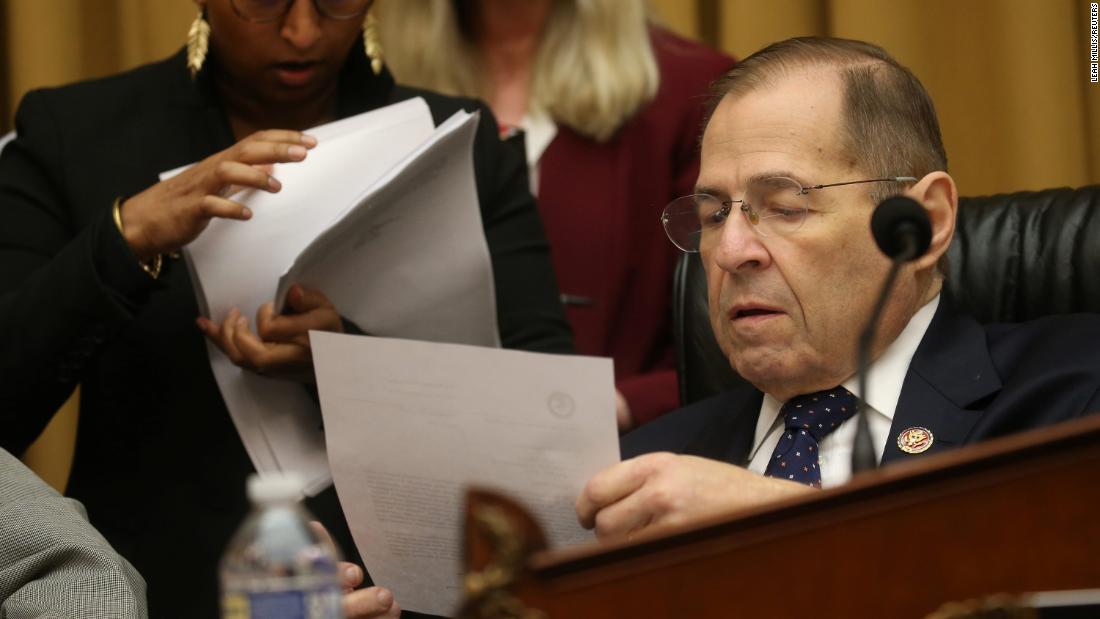 Nadler: ‘We are now in a constitutional crisis’

But Wednesday’s developments were different. Two warring branches of government will now most likely require the third — the judiciary — to adjudicate their conflict.
“We are now in a constitutional crisis,” House Judiciary Chairman Jerry Nadler, D-New York, who had previously avoided the term, told reporters.
Republican Rep. Louie Gohmert of Texas was just as alarmist, but he accused an overreaching majority of provoking the imbroglio.
“You are on the wrong side of history,” he told Democrats — claiming that the FBI investigation into the Trump campaign and alleged links with Russia in 2016 represented a coup against the presidency.
If anything, the stakes are now even more important than whether Trump obstructed justice during the Mueller investigation, or the contempt charge against Barr, which will have little practical effect on the attorney general’s ability to function.
Those are issues that will expire with this administration in two or six years.
But Trump’s refusal to comply with long traditions governing the relationship between Congress and the presidency cut to the core of American democracy and could change it for future generations.
The President’s presumptive claim of executive privilege over the entire un-redacted Mueller report after Democrats had issued a subpoena demanding its handover goes further than his previous efforts to evade congressional oversight, crossing an important line.
If the gambit stands, it suggests a President can simply ignore the tools designed for Congress to check his power and examine his actions and he will face no significant sanction. Once this threshold is crossed there may be no going back for future administrations.
“This is not a normal partisan event, because the President is invoking executive privilege in an extremely broad way,” said Corey Brettschneider, professor of political science at Brown University.
“It is hard to think of an example like that, that is as fundamental to the American Constitution, not only that Congress makes the laws and the president exercises them, but part of the legislative function is to exercise oversight.
“Without the subpoena power to compel oversight it is hard to know how they can even do the basics of their jobs,” said Brettschneider, author of “The Oath and the Office: A Guide to the Constitution for Future Presidents.”

Turning in their graves 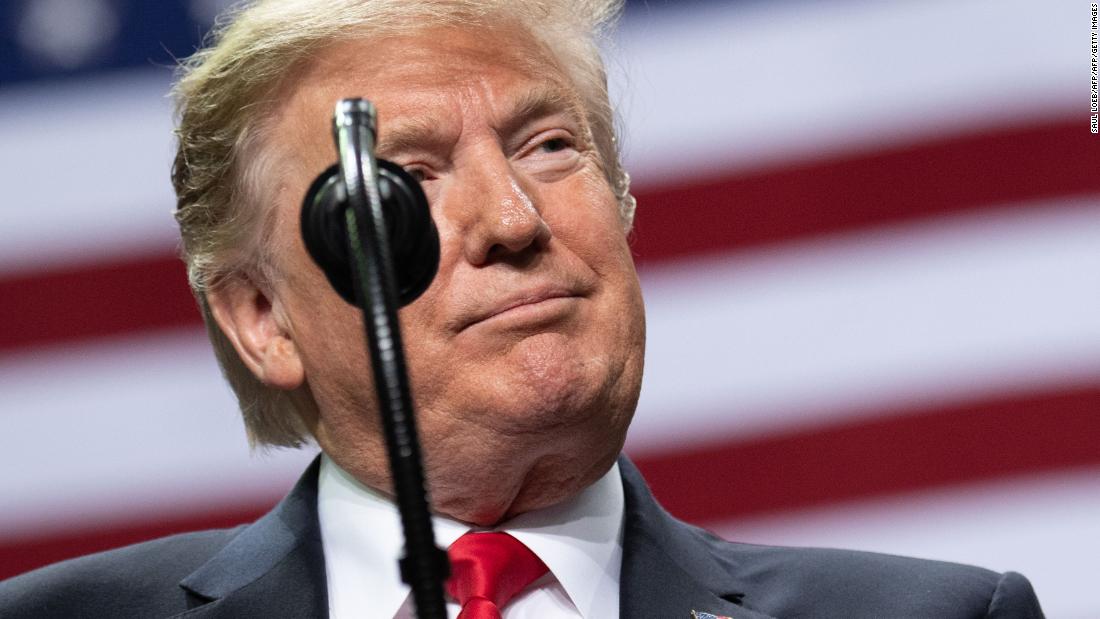 Leon Panetta, who was White House chief of staff for Bill Clinton, told CNN that presidents typically pick and choose executive privilege battles with Congress.
But Trump, consistent with his indifference to checks and balances, domineering personality and willingness to shatter governing norms, chose a blanket approach and is resisting congressional oversight across the board.
“Our forefathers must be turning in their graves,” Panetta told CNN’s Brianna Keilar. “Our forefathers were really clear that they didn’t want power to be centralized in any one branch of government, particularly in a king or a president.”
Many analysts believe that at the end of the potentially lengthy legal battle on multiple fronts, the courts will eventually side with Congress on its power to compel testimony.
During Watergate, the Supreme Court upheld the concept of executive privilege but found it was not absolute and unqualified and should not be used to cover up presidential wrongdoing.
As a result of the ruling, President Richard Nixon had to hand over incriminating tapes of his discussions with senior aides to a federal court, a move that accelerated his departure from office in disgrace.
In articles of impeachment drawn up in the House before his resignation, Nixon was accused of failing “without lawful cause or excuse to produce papers and things as directed by duly authorized subpoenas issued by the Committee of the Judiciary of the House of Representatives.”
The charge argued that with such behavior Nixon had assumed for himself powers constitutionally vested in the House.
The executive privilege fight and the subpoena barrage are not the only areas where Trump is challenging presidential power.
He is personally suing a congressional committee to stop the handover of his financial records. Treasury Secretary Steven Mnuchin made his own evaluation of the extent of congressional power by refusing to hand over Trump’s tax returns.
The administration ordered former White House counsel Don McGahn on Tuesday not to honor a subpoena to hand over documents pertinent to the Russia investigation. Multiple subpoenas and requests for documents from other committees are being ignored.
A new seam of conflict opened up on Wednesday when House Intelligence Chairman Adam Schiff, a California Democrat, issued yet another subpoena to Barr for all foreign intelligence and counterintelligence materials produced during the Mueller investigation after repeated previous requests fell on deaf ears.
“As both the special counsel and the Department of Justice have recognized, the Congress has a vital constitutional role in evaluating misconduct by the Executive Branch, including the President, and to assess and refine laws that address the ‘sweeping and systematic’ invasion of our democracy by Russia,” Schiff said in a statement.
“We therefore need these materials in order to do our job. The department’s stonewalling is simply unacceptable.”
There was no immediate response from the Justice Department. But if the administration’s past behavior is any guide, Washington should brace for yet another controversy over the extent of congressional power.