Those who see the dinner with Putin as further evidence of collusion miss the deeper point. Far more momentous is the authoritarian kinship it displays 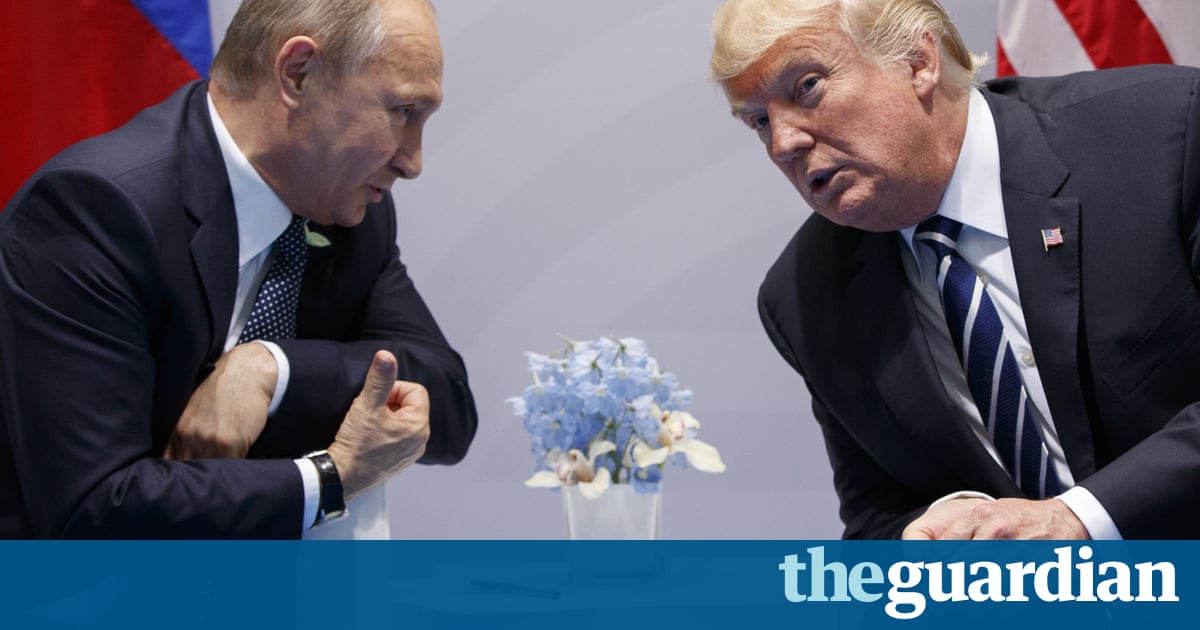 So, Donald Trump would rather spend an intimate hour chatting alone with Vladimir Putin than with Angela Merkel. Who wouldnt? A shirtless Putin rides horseback through the Russian steppe; he dons scuba gear to pluck ancient treasures from the Black Sea; he guides, in a motorized hang-glider, endangered Siberian white cranes to their migration grounds and shrugs at the assassination of journalists and regime critics, those purveyors of fake news. Whats not to like?

Merkel drearily works to protect the environment, safeguard human rights and offer sanctuary to refugees from civil war. What has that achieved, besides lurching us to an apocalyptic clash of civilizations? And who wants to be lectured about the health of the planet by that German lady, anyway?

Predictably enough, US allies were surprised, flummoxed, disheartened by the presidents chummy chatter with Russias authoritarian mischief-maker at the G20. But why the surprise? What did Merkel and other European leaders do for Trump during the election?

Merkel viewed the prospect of a Trump victory with thinly veiled dread. Putin, by contrast, wanted Trump to win and evidently devoted substantial resources to bringing that about. So why shouldnt Trump feel gratitude toward the one world leader who supported him when all the leaders of Americas so-called allies shunned candidate Trump and were horrified by his triumph?

In his meeting with Putin earlier that day, Trump asked the Russian president not once but twice! whether he had meddled in the American election. All the more reason, then, to seek out Putin later in the day to assure him that the questions had been entirely pro forma.

True, those who subscribe to the quaint old-school belief that an American president should represent his nation and not his own interests will be disheartened by Trumps willingness to overlook a foreign adversarys contempt for Americas democratic values and its criminal interference in the American electoral process. But that presupposes the president himself cares about these values and that process.

Clearly Trump does not. The state department has just unveiled plans to dismantle its office of global justice, the organization that coordinates Americas efforts to bring perpetrators of massive human rights violations to justice. And while the human rights community shakes its head in disbelief, tyrants, kleptocrats and butcherers around the world breathe a little more easily.

And Wednesday has witnessed a notable first, the inaugural meeting of Trumps voting fraud commission a commission designed not to uncover or eliminate voter fraud but to perpetrate it.

Of the hundreds of lies and defamations that the president has spread since his inauguration, his spurious claim that possibly 5 million illegal voters cost him the popular vote promises to be his most toxic and effective, bootstrapping a bald lie into an institutional reality that works to strip the voting roles of millions.

We may never know the content of Trumps intimate dinner conversation with Putin, to which only Putins interpreter was privy. But those who see it as further evidence of collusion miss the deeper point.

The collusion may be real, but far more momentous is the authoritarian kinship. Maybe Trump even boasted to Putin about the voting fraud commission. In any case, Uncle Vlad has every reason to be proud.