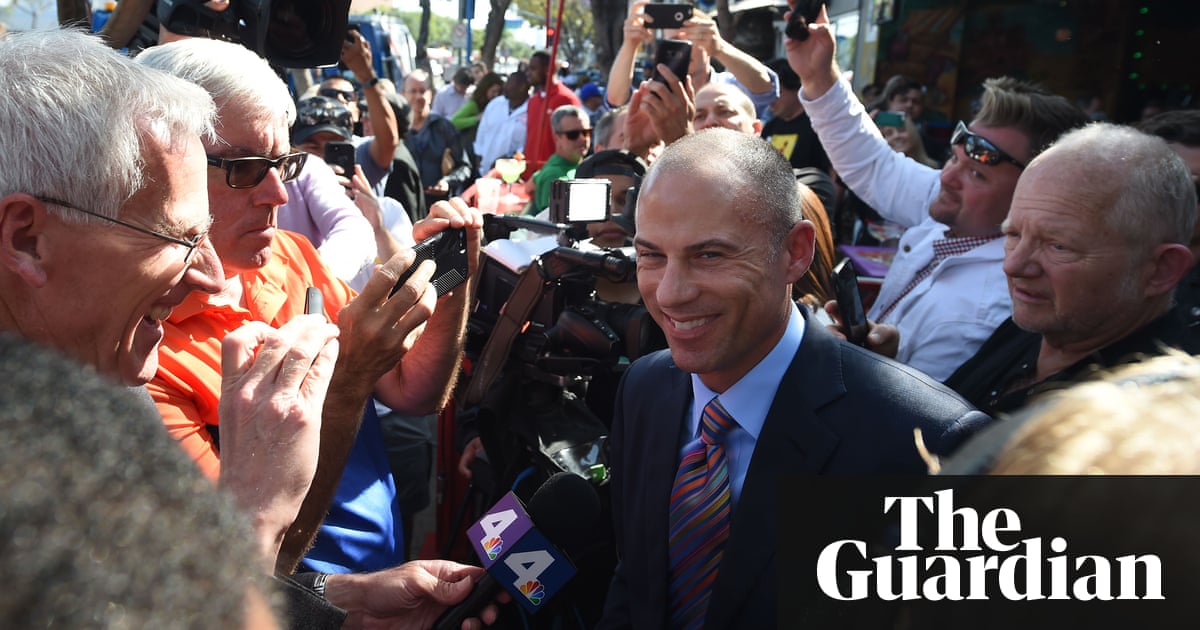 Stormy Daniels stood in front of the sex shop wearing a big smile and holding a small box which contained the key to West Hollywood.

City officials stood on one side, a mannequin with chains and a leather jockstrap on the other. Camera crews and supporters packed the sidewalk, some clambering on to a roof for a better view. “Go Stormy,” yelled a man clutching a margarita. This was – by official proclamation – Stormy Daniels Day. Outside the liberal California enclave of West Hollywood, it was known as Wednesday.

The celebration was not for Daniels’ work in adult films. In the United States of 2018 this was a political event – an act of solidarity expressed by a backdrop with a single word: “#resist”.

Daniels, whose real name is Stephanie Clifford, has tangled Donald Trump in knots over hush money paid to conceal his alleged one-night stand with her in 2006, an imbroglio which some analysts say poses a graver threat to the president than Robert Mueller’s investigation into Russian meddling in the 2016 election. Hence the city of West Hollywood hailing Daniels a “profile in courage” and the bawdy hollers from supporters.

But it was another figure, dapper and bullet-headed, who truly electrified the crowd. If Daniels was the star, here was the ringmaster. “Mi-chael! Mi-chael!”

Michael Avenatti: the attorney who has become a hero of the left by transforming what seemed a tawdry blip for Trump into a millstone around his presidency.

The burlesque tableaux outside Chi Chi LaRue’s sex store belied the high political stakes, said Robbie Turner, 40, jostling to glimpse Daniels and Avenatti. “But if ridiculous saves us from ridiculous, so be it. They’re the only thing that seems to have taken Trump off his stride. I hope they take him down.”

Avenatti, 47 and a veteran litigator who operates from an office in Newport Beach, south of Los Angeles, has waged a relentless legal and media blitz against Trump and his personal attorney, Michael Cohen, to overturn a non-disclosure agreement signed by Daniels.

This has spilled the revelation that Trump repaid Cohen the $130,000 Cohen paid to Daniels before the election, possibly violating federal campaign finance laws. Which in turn has lifted the lid on Cohen parlaying his relationship with the president into payments from corporations and Columbus Nova, an investment firm linked to the Russian oligarch Viktor Vekselberg.

Avenatti has mastered the news cycle by dropping regular bombshells – notably Cohen’s bank transactions – via media interviews and tweets. He can make headlines just by trolling the president and his beleaguered legal fixer.

More is coming, Avenatti told the Guardian. “I don’t believe Mr Trump will complete his term. Information that is going to come to light in the coming months, as well as information that Mr Cohen is going to provide, will make it nearly impossible for him to serve out his term.”

Avenatti spoke in a wide-ranging interview over breakfast in Beverly Hills, before the West Hollywood event. It touched on his roots, legal strategy, taste for adrenaline – and increasingly fraught relations with parts of the media. As his fame has grown so have questions about his financial affairs and media strategy.