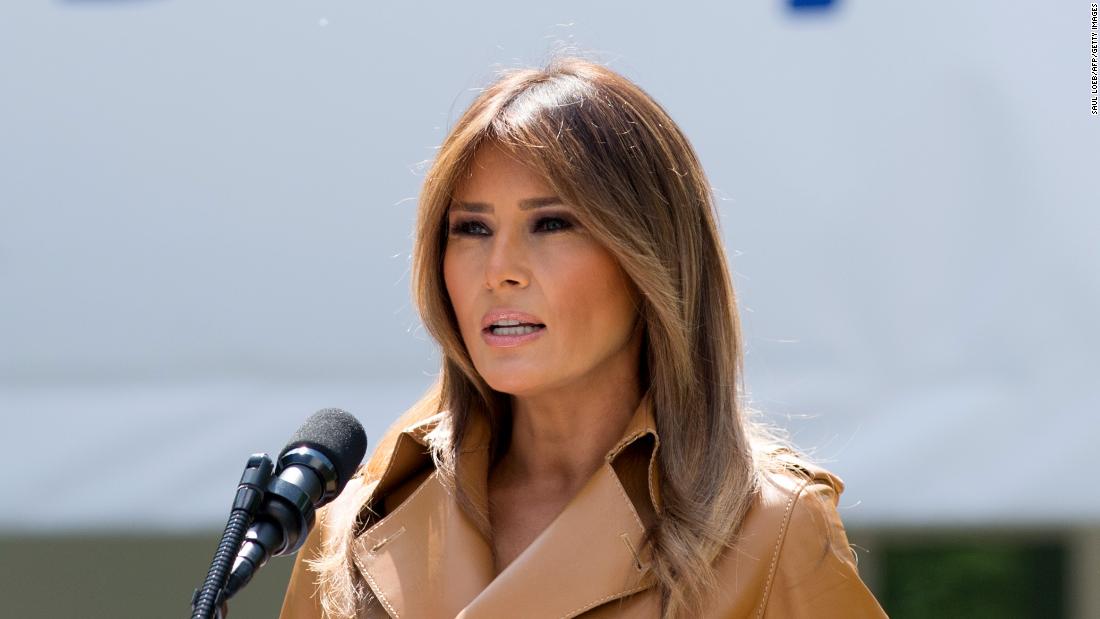 (CNN)President Donald Trump welcomed first lady Melania Trump home from the hospital Saturday, but initially misspelled her name as “Melanie” in a tweet.

The first lady returned home on Saturday following a Monday procedure, her office confirmed in a statement.
“The first lady returned home to the White House this morning. She is resting comfortably and remains in high spirits,” said Stephanie Grisham, the first lady’s communications director. “Our office has received thousands of calls and emails wishing Mrs. Trump well, and we thank everyone who has taken the time to reach out.”
Trump has been recuperating at Walter Reed National Military Medical Center since she underwent a kidney embolization procedure on Monday. Grisham said Monday that the first lady was expected to stay in the hospital for the duration of the week.
Pressed for more information about the first lady’s condition and why she stayed in the hospital five nights after what was possibly a routine kidney procedure, Grisham pushed back on reports speculating about Trump’s health.
“Every patient is different,” she told CNN. “The medical professionals who have been giving opinions to the media based on one statement are uninformed. Mrs. Trump has a medical team that is comfortable with her care, which is all that matters. Her recovery and privacy are paramount and I will have no further comment beyond this. Anyone else who chooses to speak with the media will only be speculating.”
He visited his wife multiple times following the procedure.
“She’s doing great. Doing great,” he told a reporter after delivering remarks at a prison reform event Friday at the White House.
On Tuesday, the President tweeted that she was “doing really well” and would be leaving the hospital in “2 or 3 days.” It’s unclear why the hospital stay lasted longer than expected.
Earlier in the week, the first lady’s office declined to offer further details about the extended hospital stay and asked for privacy.
“I am not going to expand beyond the statement I put out,” Grisham, told CNN Tuesday when asked why the routine procedure would require a multi-day hospital stay. “The first lady is in good spirits and she is resting. There are HIPAA laws to consider, but she also deserves personal privacy.”
Though she isn’t expected to make any public appearances in the coming days, Trump expressed her appreciation for Walter Reed medical staff earlier this week.
“A sincere thank you to Walter Reed Medical Unit @WRBethesda & to all who have send good wishes & prayers! I am feeling great & look forward to getting back home @WhiteHouse soon,” she tweeted Wednesday.
Trump, who turned 48 last month, had been experiencing an issue with her kidney that her office described as benign but requiring medical attention.
She is the first US first lady to undergo such a serious medical procedure while in the White House since Nancy Reagan had a mastectomy in October 1987. Rosalynn Carter underwent surgery to remove a benign lump from her breast in April 1977. Weeks after Betty Ford became first lady, she was diagnosed with breast cancer and underwent a mastectomy in September 1974.