Conversation is not harassment sir, Donald Trump told by Brandon Victor Dixon, who spoke directly to vice-president from stage after he was booed by patrons 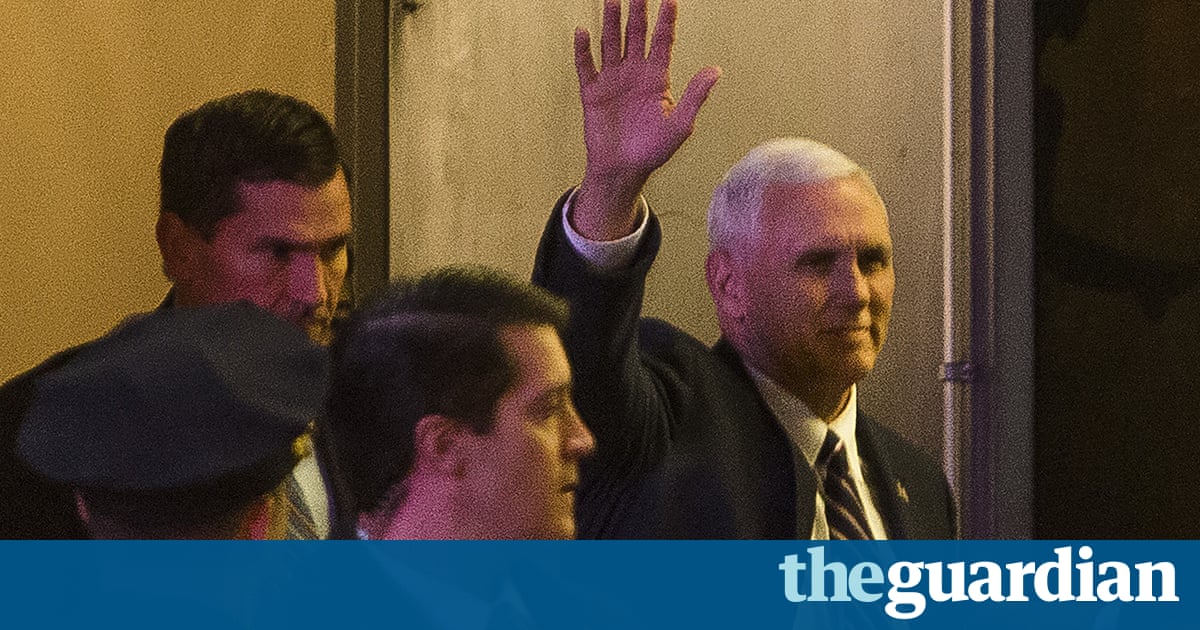 An extraordinary war of words broke out between president-elect Donald Trump and the cast of the diversity-celebrating hit musical Hamilton, after the vice-president elect, Mike Pence, was booed by the audience.

Trump took to Twitter to demand an apology from the cast after its members called on Pence and the incoming Trump administration to respect the rights of all Americans.

Our wonderful future VP Mike Pence was harassed last night at the theatre by the cast of Hamilton, cameras blazing. This should not happen!, Trump tweeted.

The Indiana governor was booed by theatregoers after he arrived at the Richard Rodgers theatre in New York on Friday night to see the Pulitzer prize-winning musical.

Then, after the curtain call, one of the actors, Brandon Victor Dixon, addressed Pence from the stage, with the cast behind him. Vice-president elect Pence, I see you walking out, but I hope you will hear us, just a few more moments. Theres nothing to boo here, ladies and gentlemen, Dixon said. Were all here sharing a story about love.

We, sir, are the diverse America who are alarmed and anxious that your new administration will not protect us, our planet, our children, our parents, or defend us and uphold our inalienable rights. We truly hope this show has inspired you to uphold our American values and work on behalf of all of us. All of us.

Many of the remaining audience began to cheer softly as Dixon pointed towards Pence. We thank you for sharing this wonderful American story, told by a diverse group of men and women of different colours, creeds and orientations, he said.

But the president-elect took exception to the casts intervention. The theatre must always be a safe and special place, Trump tweeted. The cast of Hamilton was very rude last night to a very good man, Mike Pence. Apologise!

Dixon fired back at Trumps allegations of harassment. Conversation is not harassment sir. And I appreciate @mike-pence for stopping to listen, he tweeted in response.

According to Variety the performance was sporadically disrupted by loud booing at the presence of a strong conservative and evangelical Christian, with a voting record that shows opposition to gay rights, at a Broadway show that celebrates diversity.

Outside, many protesters jeered, including one woman who held up a sign with a line from the musical that always gets a cheer: Immigrants: we get the job done.

It was not clear whether Pence heard the whole address or made any response.

The incident brings into focus the conflicts and divisions that Donald Trumps nascent presidency has already brought to Manhattan. His midtown home and transition HQ, Trump Tower, has been turned into a fortified citadel by the police and Secret Service, causing congestion and chaos in the area.

Meanwhile, foreign leaders and diplomats are running a gauntlet of protesters to meet with the president-elect, and finding that they are taking meetings not with Trump and foreign policy advisers, but surrounded by family members.

When the Japanese prime minister, Shinzo Abe, visited Trump in his gilded penthouse last week, he found himself seated across from Trumps daughter, Ivanka, whose jewellery business last week sent out a marketing email pointing to the bracelet she wore during her fathers interview on the current affairs show 60 Minutes.

Hamilton is a hip-hop musical biography of Alexander Hamilton, one of the founding fathers of the United States, who rose to become the righthand man of George Washington, as well as a key figure in the creation of the US financial system and the coastguard. He was killed in an 1804 duel with the then vice-president Aaron Burr the character Dixon plays in the show.

The musical, which has enjoyed a spectacular run on Broadway, was created by Lin-Manuel Miranda, whom it turned into a superstar. He had a long run in the lead part before relinquishing it earlier this year to Javier Muoz, his understudy.

Muoz is openly gay and HIV-positive. He has made a point of speaking out about living with HIV since 2002 and his hopes to diminish the stigma around the condition.