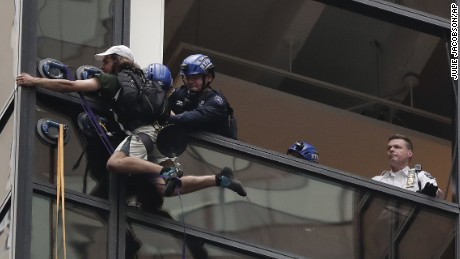 For three harrowing hours, the young Virginian soared high above the scorching streets of midtown Manhattan.
The 19-year-old precariously hauled his thin frame up the side of Trump Tower on Wednesday afternoon. He methodically positioned suction cups above his head as he ascended the facade of the 68-story glass behemoth.
He stopped pedestrian and motor traffic along Fifth Avenue near Central Park. Onlookers chronicled the climb with cell phones and cameras.
Every foot of the ascent lifted Rogata to a new level of social media stardom. Millions witnessed his daredevil stunt as multiple cable networks like CNN, MSNBC and Fox News aired the climb live. Outlets such as Time, BuzzFeed News and New York’s ABC 7 streamed the event via Facebook Live.
It was a spectacle befitting Trump’s larger-than-life persona. Rogata soared until a pair of hulking police officers, who had removed a glass panel on the 21st floor, snatched him back to terra firma to face criminal charges.
This is what we know about the Trump Tower climber and his stunt:

Rogata, a Great Falls resident, was formerly Michael Joseph Ryan but changed his name in 2015, according a court affidavit obtained by CNN.
Cameron Davis, 19, remembers him from their years at northern Virginia’s Langley High School, class of 2015.
They took honor’s classes together, had mutual friends and competed on the debate team, according to Davis.
“He was a normal high school guy,” Davis said. “A really nice kid, very conservative. But, in his personal life, always really nice.”
Asked about Rogata’s politics, Davis said: “He just had standard Republican/conservative beliefs that came up in government classes and lunch conversations.”
The Fairfax County Republican Committee said Ryan worked there during his high school years.
“It is our understanding that a Michael Ryan was an intern with our organization some time before 2014, but we cannot confirm that it was the same individual” who scaled Trump Tower, the committee’s executive director, Eric Johnson, said in a statement.
“There is nobody of that name currently employed by the FCRC as an intern or in any other capacity, nor do we have a member by that name.”
In November 2014, Ryan’s parents contacted the Fairfax County Police Department to say their son had run away, according to a police report obtained by CNN.
Ryan’s mother told police her son’s academic performance had declined because of his “obsession” with an “Internet project” involving a blog on government issues, the police report said. Ryan apparently ran away after his parents put limits on his Internet access at home and at school.
The case was closed after Ryan agreed to come home and said he would not run away again, the police report said.
Davis said he watched his former classmate on television Wednesday. “No doubt it was him,” he said.

Where is he now?

Rogata was arrested Wednesday evening and taken to Bellevue Hospital for a psychological evaluation.
Police have charged him with reckless endangerment and criminal trespassing.
He has been medically cleared, and was undergoing the psych evaluation, according to two law enforcement sources briefed on the investigation.
Rogata could face several state charges from the Manhattan District Attorney’s office, the sources said.
It unclear whether Rogata has an attorney.

How did he get here?

The climber drove from Virginia to Brooklyn on Tuesday, according to the sources.
Police said he stayed at a New York hotel, CNN affiliate WCBS reported.
Rogata’s parents told investigators they were on vacation until Wednesday and noticed their car missing when they arrived home, according to sources.

Why did he do it?

Rogata was trying to get a “private audience” with Donald Trump, the Republican presidential nominee.
He shed light on his motive in a widely shared YouTube video he posted on Tuesday.
The video is titled “Message to Mr. Trump (why I climbed your tower).”
In it, a hooded young man says he is an “independent researcher” who wants “to discuss an important matter” with Trump.
“Believe me, if my purpose was not significant, I would not risk my life pursuing it,” he says. “The reason I climbed your tower was to get your attention.” 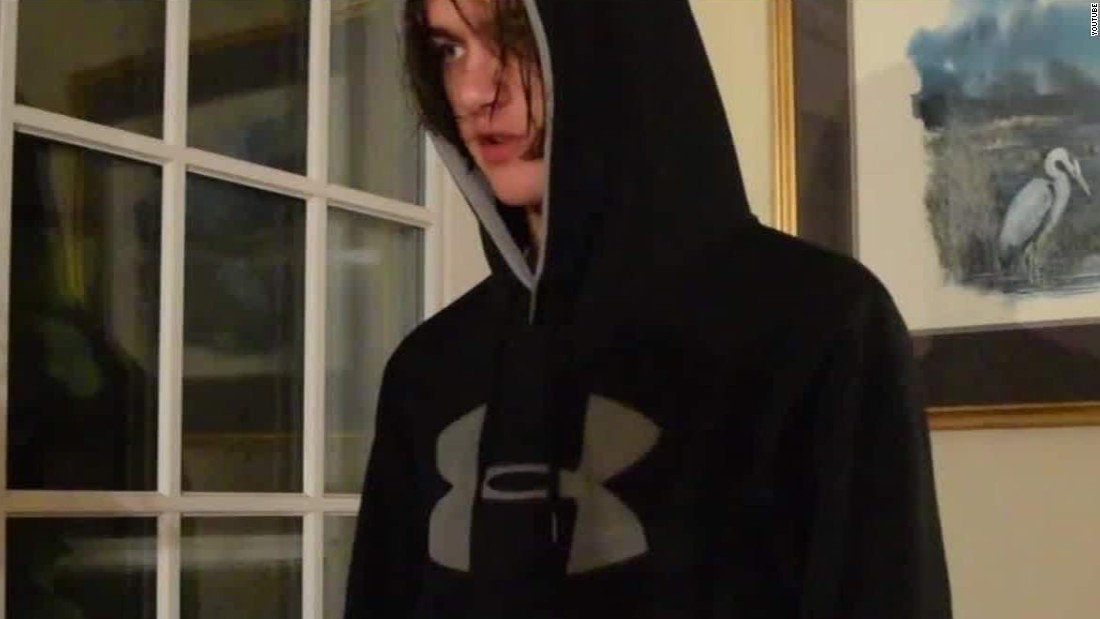 Man who climbed Trump Tower had video message for Trump

He gave investigators the same account.
“What he explained to us is that he wanted a personal meeting with Mr. Trump and he posted a YouTube video on Tuesday,” said Bill Aubrey, chief of detectives with Manhattan South Precinct.
“That YouTube video explains that he’s an independent researcher and he wanted to meet with him (Donald Trump) and that’s the reason why he was climbing this building. At no time did he express that he wanted to hurt anybody. His sole intention was to meet with Mr. Trump.”

Apparently not. He’s now refusing to answer questions from investigators about how he planned the climb or whether he had any previous experience with the suction cup devices, law enforcement officials said.
“We actually don’t think he thought this would work,” one source said.
Investigators are going through his computer and phones.

How did Trump react?

Trump Tower is the Republican nominee’s grandest and highest-profile property, and where his campaign is headquartered.
It was from Trump Tower that the real estate mogul and TV reality star launched his presidential campaign last year. It was home to the famous “Apprentice” boardroom.
The real estate mogul was not in the building at the time of the climb, but on the campaign trail.
After a campaign rally in Florida on Wednesday evening, Trump tweeted: “Great job today by the NYPD in protecting the people and saving the the climber.”

Will the litigious real estate mogul sue for damages?

Who knows? Trump knows lawsuits well.
The damage from broken windows and air vents cut open by police is unclear.
Michael D. Cohen, special counsel to the Trump Organization, said: “This man performed a ridiculous and dangerous stunt. There’s damage to the building and he caused the unnecessary deployment of New York’s finest to protect his safety and the safety of everyone in the building. He’s caused the shutdown of traffic on Fifth Avenue. I’m 100% certain the NYPD had better things to do. If Mr. Trump were here he’d be thanking law enforcement for the job they’re doing and a job well done.” 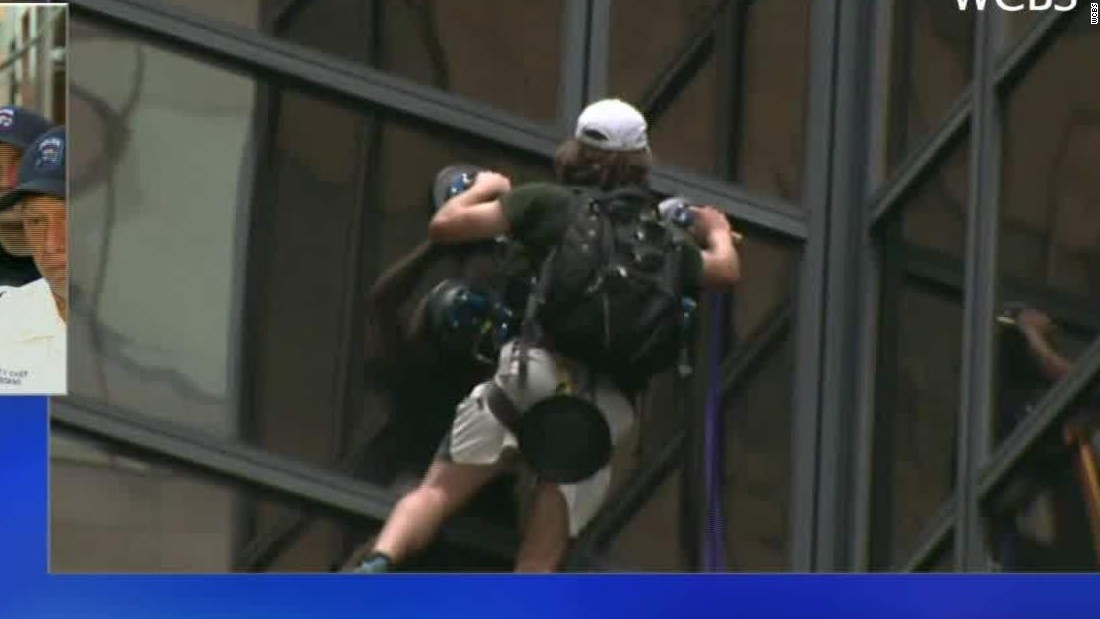 Has Rogata’s stunt been tried before?

French rock and urban climber Alain Robert used suction cups and a rope to climb the Galaxy Macau Tower in China to promote “The Amazing Spider-Man 2” in April 2014.
A similar feat was attempted by professional climber Sierra Blair-Coyle, who hauled herself up a 33-story building in South Korea in May 2016 with two vacuum cleaners to promote LG’s newest CordZero model.
Science entertainment television program “MythBusters” investigated Hollywood heist scenes and tested whether it was possible to scale an air duct using suction cups in episode 54, which aired in July 2006.
Presenter Jamie Hyneman found suction cups were able to hold his weight but the noise of his contraption, which included a vacuum, was too noisy and blew his cover.
The man appeared to be relying on a series of NV11 Fairs Air Powered Suction Cups, which retail at $280.22 each.
The product is marketed as able to lift up to 150 lbs, being ideally suited to picking up glass or stone surfaces.
Follow @RaySanchezNYC