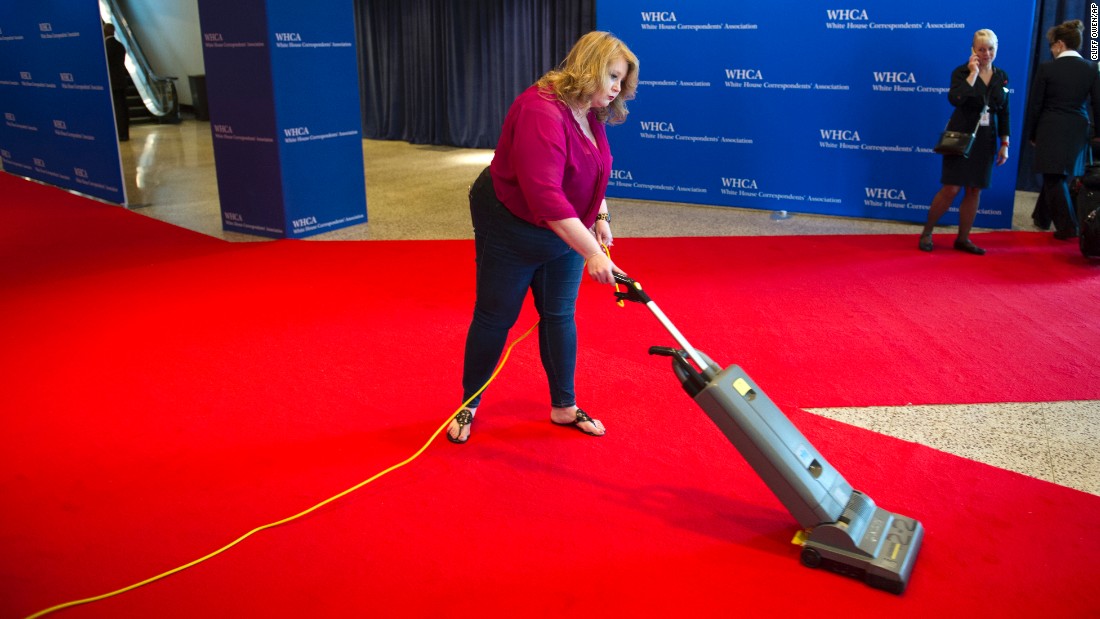 Washington (CNN)President Donald Trump spent his 100th day in office not at the annual black-tie dinner that some say launched his bid for the White House, but with some of the people who sent him there.

Amid increasingly hostile relations between Trump and the media, Trump announced in February that he would not attend the White House correspondents’ dinner Saturday night — making him the first President since Ronald Reagan to miss the event (although Reagan, who was hospitalized after an assassination attempt at the Washington Hilton — the same hotel serving as the venue for Saturday’s dinner — gave remarks by phone).
Instead, Trump held a campaign-style rally in Harrisburg, Pennsylvania, one of the states he wasn’t expected to win in November, with the aim of reminding some of his most ardent supporters that he has kept his campaign promises.
Minutes into Trump’s Harrisburg speech, he told the crowd just how much he preferred spending the evening with supporters than the Washington media.
“A large group of Hollywood actors and Washington media are consoling each other in a hotel ballroom in our nation’s capital right now,” he said. “They are gathered together for the White House correspondents’ dinner without the President.
“And I could not possibly be more thrilled than to be more than 100 miles away from the Washington swamp spending my evening with all of you and with a much, much larger crowd and much better people,” Trump added.
Trump’s absence from the dinner became a topic of conversation early in the event when White House Correspondents’ Association President Jeff Mason received a standing ovation after professing that the press is not the enemy of the American people — a reference to an attack line Trump delivered early in his presidency.
“Tonight looks a little different, but the values that underpin this dinner have not changed. In fact I think they’ve been reinforced,” he said. “We are here to celebrate the press — not the presidency.”
“Freedom of the press is a building block of our democracy,” Mason added. “Undermining that by seeking to delegitimize journalists is dangerous to a healthy republic.”
And comedian Hasan Mihnaj, a correspondent on the Daily Show, a satirical news show, reinforce that idea when it was his turn at the mic.
“This event is about celebrating the First Amendment and free speech,” he told the sold-out crowd. “Free speech is the foundation of an open and liberal democracy from college campuses to the White House.”
“Only in America can a first generation Indian American Muslim kid get on this stage and make fun of the President,” he added.
Although Trump skipped the chance to mingle and joke with the media, which he has routinely lambasted as “fake news,” the days leading up to his 100th in office, a traditional milestone for measuring an administration’s early achievements, have perhaps seen him give the highest number of sit-down interviews to media outlets since he entered office.
Tension between the President and news organizations has been a hallmark of his early administration.
Several news organizations withdrew from the White House correspondents’ dinner in protest of Trump’s treatment of the media before Trump decided he would not attend. Vanity Fair and Bloomberg, which usually co-host an exclusive, star-studded after-party, have canceled that gala, while The New Yorker canceled its pre-party, which would have happened Friday.
The dinner attracted national attention for attracting A-list celebrities, but the original purpose has been to raise money for journalism scholarships. With Trump and many celebrities skipping this year’s event, many media companies — including CNN — decided that instead of inviting celebrities as guests this year, journalism students would be their guests instead.
Bob Woodward and Carl Bernstein, who were Washington Post reporters when they famously broke the Watergate story that brought down President Richard Nixon, offered a critical reflection on the state of the mainstream media in 2017, but also emphasized its key role in American democracy.
“Our reporting needs to get both fact and tones right,” Woodward said. “(T)he effort today to get the best obtainable version of the truth is largely made in good faith.”
Speaking to the absent Trump, he said, “Mr. President, the media is not fake news. Let’s take that off the table as we proceed. …
“Whatever the climate, whether the media is revered or reviled, we should and must persist, and I believe we will,” he said. “Any relaxation by the press will be extremely costly to democracy.”
The last time Trump attended the dinner was in 2011, when he was a New York real estate mogul and reality-TV star who had just jumped into politics by getting involved in the “birther” movement, calling for President Barack Obama to release his birth certificate. Trump ended up being the butt of the jokes that night from comedian Seth Meyers and Obama himself.
Trump’s rally Saturday took place in a state that no Republican had won in a general election since George H. W. Bush in 1988. Trump reminded those who sent him to the White House that he has indeed kept his campaign-trail promises, despite evidence to the contrary.
Hours before the dinner, Trump tweeted that the “FAKE media” failed to trumpet his accomplishments. But Trump enters his 100th day without having passed any major legislation and with the lowest approval rating of any president during this time period.
Still, a recent poll by ABC News and The Washington Post showed him retaining support among his base, with 96% of people who said they voted for him saying they would do so again. Trump, who already announced his plan to run for re-election, has raised tens of millions of dollars before he marked his 100th day in the White House.