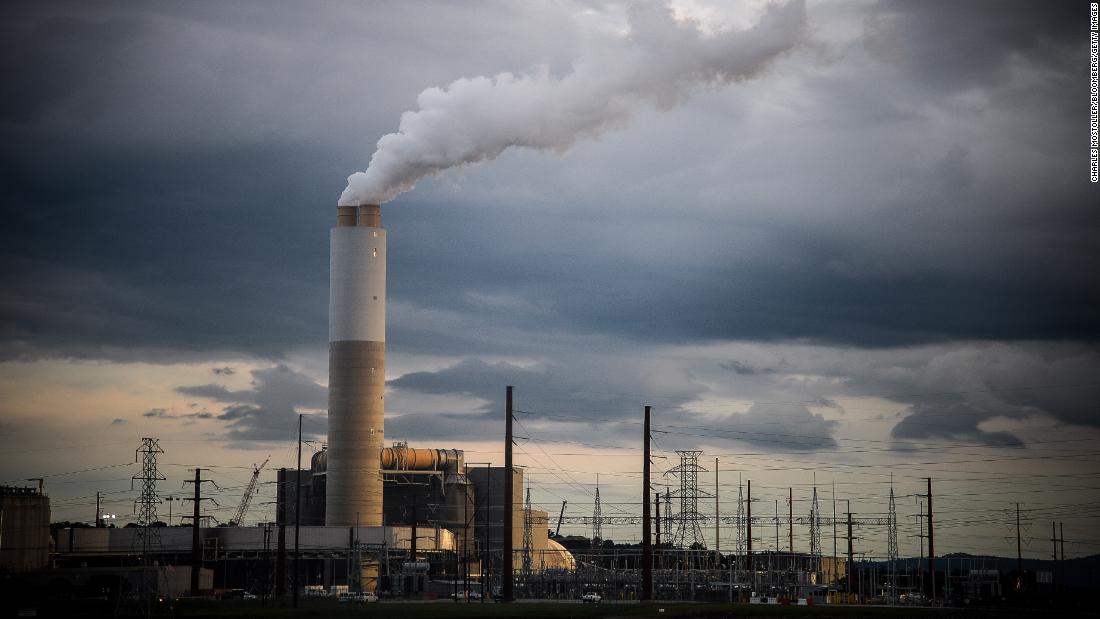 New York (CNN Business)The Trump administration attempted a daring rescue of the coal country, but the pro-coal agenda is failing to jump-start a renaissance — and analysts don’t see one on the horizon.

US coal consumption is projected to decline by nearly 4% in 2018 to the lowest level since 1979, the US Energy Information Administration said on Tuesday. At year-end, appetite for coal will be a staggering 44% below 2007 levels.

It’s all about an industrywide shift by power plants away from coal in favor of natural gas and solar, wind and hydro power.
“We’re seeing energy Darwinism,” said Matt Gray, senior analyst for utilities and power at London-based think tank Carbon Tracker. “Coal’s not really in the equation anymore. It’s a battle between gas and renewables.”
Just one tiny coal-fired generator is expected to come online by the end of 2019, according to EIA, a data and analysis unit within the Department of Energy.
This point was underscored by ambitious targets rolled out on Tuesday by Xcel Energy (XEL). The power company pledged to deliver 100% carbon-free electricity to customers by 2050. Xcel, which is based in Minneapolis and serves eight Western and Midwestern states, plans to slash its carbon emissions by 80% by 2030 from 2005 levels. 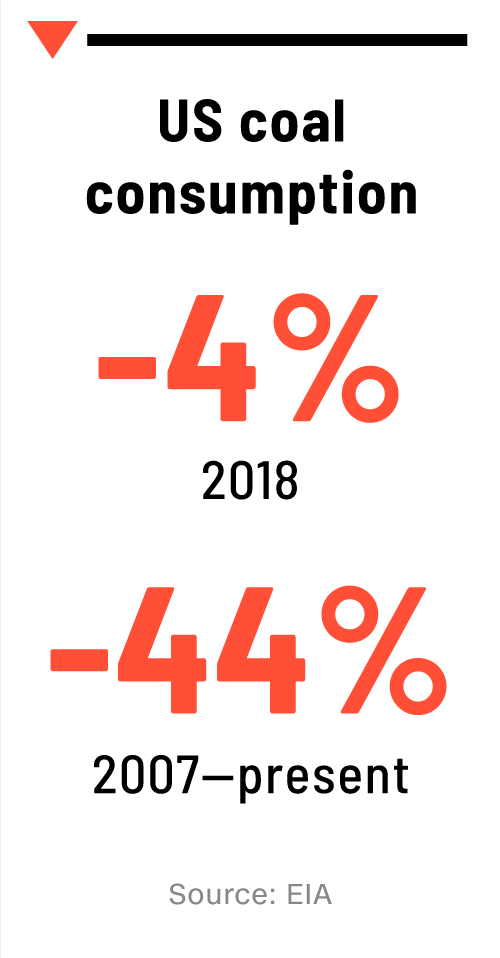 “We’re on a path to provide a more sustainable, prosperous energy future,” CEO Ben Fowke said in a statement.
Xcel hopes to achieve what it calls the most aggressive carbon-reducing goals in the industry by doubling its wind generation, continuing to operate carbon-free nuclear plants and leaning on natural gas as backup. Xcel plans to retire 20 coal units between 2005 and 2026, representing 40% of its coal-powered capacity.

Many other companies have been saying goodbye to coal. In 2017, 529 coal-fired power generators were retired, wiping out total capacity of 55 gigawatts, according to the EIA.
In 2018, another 11 gigawatts of coal-fired generating capacity were retired through September and an additional 3 gigawatts are slated for retirement by year-end, the EIA said. That would make 2018 the second-highest year ever for coal retirements.
“The industry is looking at its aging coal fleet and saying, ‘I can either fix this at great risk or move to renewables and natural gas at much lower costs,'” said Andy Roberts, research director of global thermal coal markets at consulting firm Wood Mackenzie. “It’s kind of a no-brainer.”
That thinking will continue in longer the run. Between 2019 and 2024, another 23.1 gigawatts of coal plant retirements have been announced or already received regulatory approval, according to S&P Global Market Intelligence.
Renewables have been bolstered by incentives from the state governments and at the federal level. Thanks to those incentives, NextEra Energy (NEE) said that the new cost to build wind and solar is now below that of operating existing coal and nuclear plants in the United States, according to S&P.
John Ketchum, NextEra Energy’s chief financial officer, recently called it the “best renewables environment in our history.”

Coal is not going away completely. It’s still the most-used electricity generation source in parts of Appalachia, including Ohio, Kentucky and West Virginia, as well as coal-producing states such as Colorado, Wyoming and Montana. Coal is the leading source of power in 18 states, down from 28 states a decade ago, according to the EIA.
And the industry has sought to cushion the decline of coal by boosting exports. Emerging markets including China and India continue to rely on coal to power their rapid growth. US exports of coal soared 61% to 97 million short tons of coal last year. But that’s still below the 2012 export peak and pales in comparison to the total US demand for coal of 691 million short tons in 2018, according to the EIA. 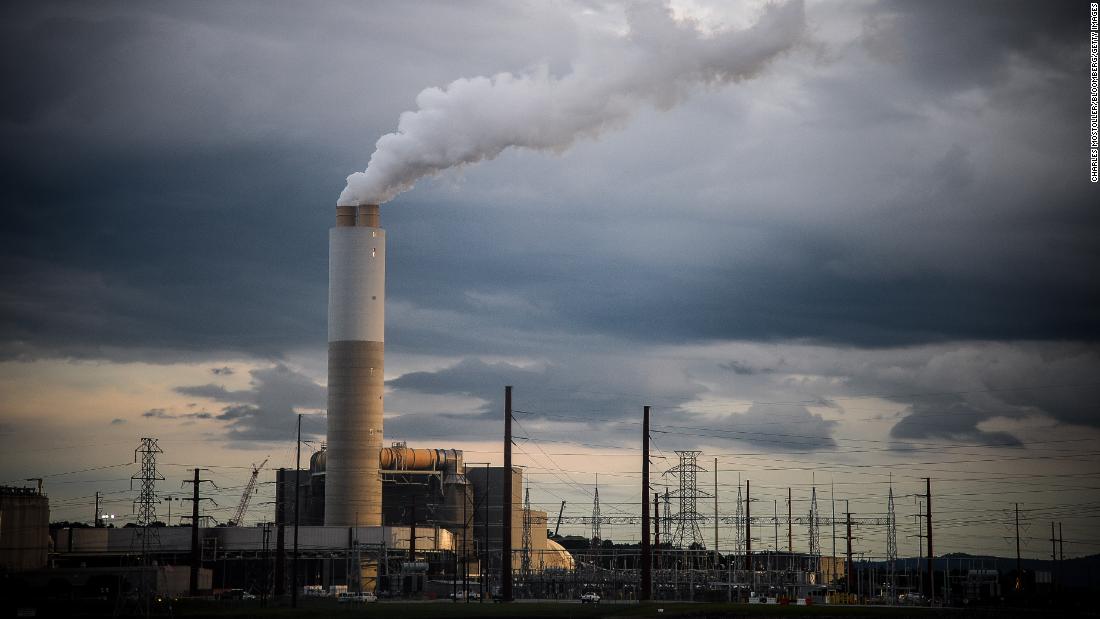 In addition to announcing plans to withdraw from the Paris climate accord, the Trump administration has also reduced environmental regulations that pressured coal. The EPA, led by former coal industry lobbyist Andrew Wheeler, is expected on Tuesday to roll back Obama-era climate change regulations, which made building new coal plants difficult, according to reports.
The White House did not respond to requests for comment.

Still, power companies are under pressure to wind down their coal-fired plants — before it’s too late. The risk is that these coal facilities become stranded assets, meaning they’re obsolete and can no longer earn an economic return.
Under the existing market structure, US energy companies face $78 billion in stranded asset risk from coal, according to a Carbon Tracker study released last week. The think tank estimates that it costs more to run 70% of US coal capacity than to build new renewable generation. And that figure will rise to 100% by 2030.
Duke Energy (DUK) alone faces an industry-leading $5.9 billion in stranded asset risk by 2030, according to estimates by Carbon Tracker.
In a statement, Duke Energy told CNN Business that it retired 47 coal-fired generating units between 2011 and 2017 and it plans to retire nine more by 2024. Duke Energy said it “continuously evaluates” its fleet, maintains assets that make “economic sense” and retires ones that are no longer viable.
Vistra Energy (VST) and Southern Company have about $4 billion in stranded asset risk by 2030, Carbon Tracker estimates.
Vistra said in a statement that earlier this year it retired multiple coal plants that were “uneconomic.”
“We do not believe we currently have any assets that meet the Carbon Tracker definition of stranded assets,” Vistra said.
Southern Company (SO) did not respond to a request for comment. The company recently said that more than 50% of its coal units have been retired or converted to natural gas.
Gray, the Carbon Tracker analyst, said the risk is that coal workers themselves will eventually get stranded as well.
“As a society, we need investors and local governments to come together to make sure the workers in those mines and plants aren’t left hung out to dry,” he said.