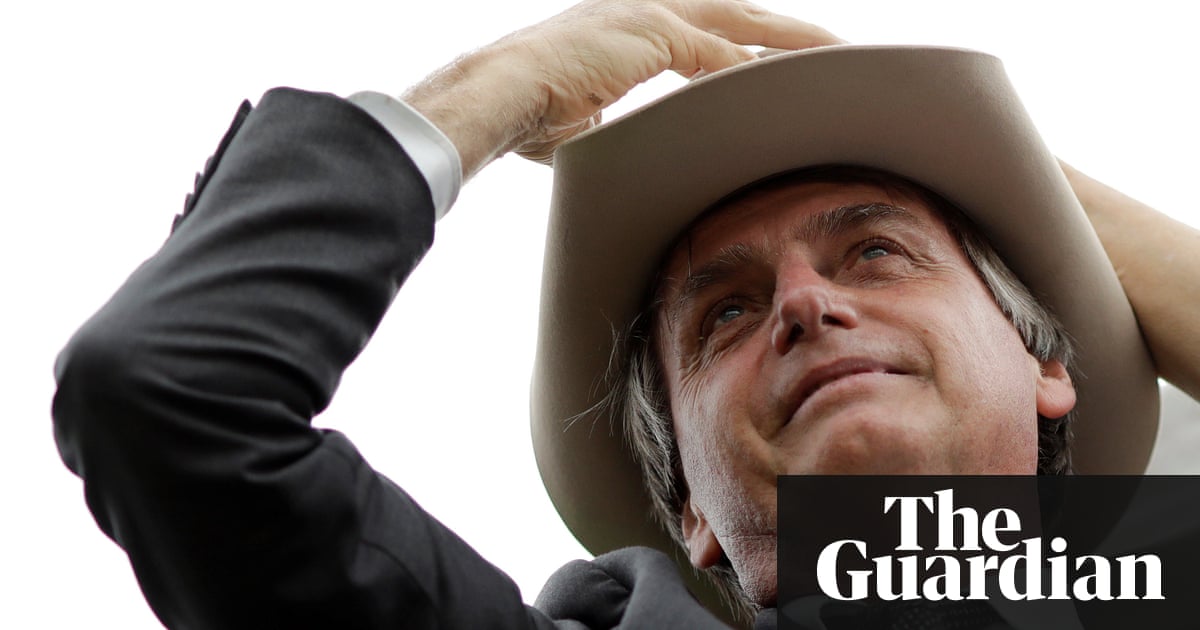 Jair Bolsonaro’s disciples had packed the arrivals hall of this far-flung Amazonian airport, united by their contempt for the left and an unbreakable determination to score a selfie with the man they call “the Legend”.

“He’s Brazil’s hope! A light at the end of the tunnel! A new horizon!” gushed Fernando Vieira, one of hundreds of fans there to greet a far-right firebrand who cheerleads for dictatorship but could soon become leader of the world’s fourth-largest democracy.

When flight 2020 delivered the presidential hopeful to his sun-scorched destination in the northern state of Roraima, pandemonium broke out. “Legend! Legend! Legend! Legend!” the crowd chanted, hoisting their idol into the air and outside through a crush of police officers and partisans.

There, Bolsonaro boarded a carnival float painted like a leopard and began an ear-splitting, hour-long procession through town.

“The Legend has arrived! The Legend is in Roraima! The big democracy party has begun!” bellowed an MC as the rally crept south, pursued by a honking tide of SUVs and motorbikes.

Many would question that last claim, for Bolsonaro – who has been described as “the most misogynistic, hateful elected official in the democratic world” and possibly the most repulsive politician on earth – is not known as a fan of the ballot-box.

Since the Pinochet-praising former paratrooper entered politics three decades ago, he has repeatedly called for a return to the kind of military rule Brazil endured until 1985. “I am in favour of a dictatorship,” he boasted during the first of seven terms as a congressman.

Such incendiary remarks were long dismissed as the ravings of a irreverent and irrelevant extremist – as were his equally inflammatory attacks on women, black people, gay people, foreigners and indigenous communities, for which he was last week charged by Brazil’s attorney general with inciting hate speech.

Now, however, Bolsonaro’s ideas have taken centre stage, with the father of five leading the race to become Brazil’s next president after the jailing of his nemesis and main rival, the former president Luiz Inácio Lula da Silva.

In a sign the world is starting to take the prospect of a Bolsonaro presidency seriously, Britain’s ambassador to Brazil recently held what he called an “interesting meeting” with the 63-year-old.

“I think it’s unlikely but very possible [he will win],” said Brian Winter, the editor-in-chief of Americas Quarterly, who has spent time with the Bolsonaro clan.

“To his supporters Bolsonaro represents law and order and that’s a very compelling message in a country with 60,000 homicides a year and the biggest corruption scandal ever detected anywhere.”

‘Thwarting Bolsonaro is the left’s most urgent task’

In his bid to capitalise on Latin America’s lurch to the right, Bolsonaro paints himself as a tropical Trump: a pro-gun, anti-establishment crusader set on draining the swamp into which Brazil’s futuristic capital has sunk.

On the stump he lambasts not slimeballs and bad hombres, but vagabundos (losers), canalhas (creeps) and bandidos (crooks). He accuses critics of peddling fake news, vows to be tough on crime and repeatedly bashes China. “We will do business with the Chinese – but we will not hand our territory over to anybody!” he told supporters in Boa Vista, to loud cheers.

His speeches, like Trump’s, are often rambling, fact-light assaults on syntax that appear nonsensical when transcribed but are strangely captivating when watched up close.