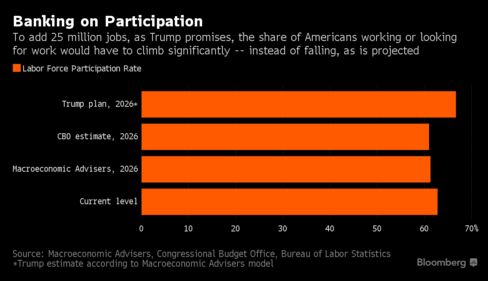 Donald Trump plans to overhaul tax, trade, energy and regulatory policies to spur an era of unbridled American growth, promising the biggest hiring binge ever achieved in the U.S.

Speaking at the Economic Club of New York, the Republican presidential candidate laid out a blueprint to create 25 million new jobs in a decade, which would be more than three times as many as created since 2006. The most jobs ever created over such a period were the 24.4 million added in the 10 years ending in March 2001, according to data compiled by Bloomberg. The worst stretch was the decade through March 2010, when about 2 million jobs were lost.

Trumps plan would be a challenge given the total number of unemployed workers is currently at 7.8 million. He has also repeatedly vowed to crack down on immigration, which would further shrink the pool of available workers.

To achieve such dramatic gains, many jobs would have to come from an increase in labor supply, or an increase in the labor force participation rate at a level that most economists would consider pretty far outside the range of credibility, said Joel Prakken, chairman of Macroeconomic Advisers LLC.

Trump said his proposals will break down the barriers to growth and expand the economy by 3.5 percent per year. Since the last recession ended in 2009, growth has been about 2 percent. He wants to remove millions of low-income Americans from tax rolls and leave spending untouched on Social Security, Medicare and Medicaid, according to a statement released before the speech Thursday. His challenger, Hillary Clinton, has said she plans to boost the stock of well-paying jobs, and bring the economy to full employment.

Trump said our plan will produce paychecks, and theyre going to be great paychecks for millions of people now unemployed.

To generate the 25 million jobs envisioned by Trump without pushing down unemployment, the participation rate would need to climb to 66.7 percent, based on a model by Macroeconomic Advisers. Thats above the current 62.8 percent level.

America has only had participation rates that high in the 1990s and early 2000s, when baby boomers were in their prime working years and the overall labor force composition was much younger. The Congressional Budget Office sees the participation rate going in reverse over the next decade, declining to 61 percent.

If you tried to get that many more jobs by stimulating the demand side of the economy and pushing down unemployment instead, pretty soon youd have inflation worries and rising interest rates on your hands, Prakken said.

Prakken also noted that Macroeconomic Advisers and other forecasters assume in their models that the labor force will continue to add immigrants and retain the ones it has.

The only way for Trump to reach his jobs target is if he “more than doubles immigration,” according to Mark Zandi from Moodys Analytics.

Trump repeated his view on Thursday that the Federal Reserve is keeping interest rates low for political reasons, and said he doesnt see an increase until President Barack Obama leaves office.

Heres what else Trump promised: