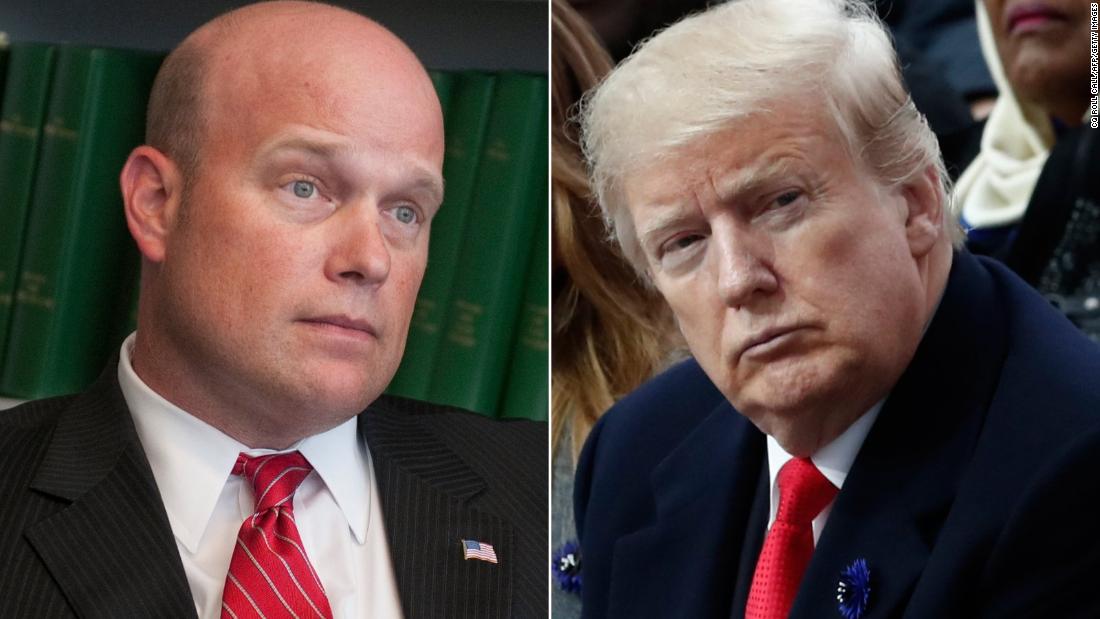 Washington (CNN)President Donald Trump has at least twice in the past few weeks vented to his acting attorney general, angered by federal prosecutors who referenced the President’s actions in crimes his former lawyer Michael Cohen pleaded guilty to, according to multiple sources familiar with the matter.

Trump was frustrated, the sources said, that prosecutors Matt Whitaker oversees filed charges that made Trump look bad. None of the sources suggested that the President directed Whitaker to stop the investigation, but rather lashed out at what he felt was an unfair situation.
The first known instance took place when Trump made his displeasure clear to acting attorney general Matt Whitaker after Cohen pleaded guilty November 29 to lying to Congress about a proposed Trump Tower project in Moscow. Whitaker had only been on the job a few weeks following Trump’s firing of Jeff Sessions.
Over a week later, Trump again voiced his anger at Whitaker after prosecutors in Manhattan officially implicated the President in a hush-money scheme to buy the silence of women around the 2016 campaign — something Trump fiercely maintains isn’t an illegal campaign contribution. Pointing to articles he said supported his position, Trump pressed Whitaker on why more wasn’t being done to control prosecutors in New York who brought the charges in the first place, suggesting they were going rogue.
The previously unreported discussions between Trump and Whitaker described by multiple sources familiar with the matter underscore the extent to which the President firmly believes the attorney general of the United States should serve as his personal protector. The episodes also offer a glimpse into the unsettling dynamic of a sitting president talking to his attorney general about investigations he’s potentially implicated in.
Whitaker and William “Bill” Barr, Trump’s nominee to replace Sessions, are facing increased scrutiny this week for their criticisms of special counsel Robert Mueller’s investigation into Russian election meddling. Whitaker refused to recuse himself from overseeing the Mueller probe. And a memo from Barr came to light in which he wrote that Trump’s decision to fire former FBI director James Comey did not amount to obstruction.
Trump has already shown a willingness to use the Justice Department to settle political scores. As CNN previously reported, the President questioned Whitaker about the progression of the investigation against Hillary Clinton when Whitaker was Jeff Sessions’ chief of staff.
“It seems very clear that the only reason that Matt Whitaker was ever appointed to this role was specifically to oversee the Mueller investigation,” Mueller biographer Garrett Graff said on Friday in an interview on CNN’s Newsroom.
With Sessions, Trump ranted publicly about how he did nothing to curtail the Mueller investigation. Sessions had recused himself from oversight because of his role on the Trump campaign.
“Attorney General Jeff Sessions should stop this Rigged Witch Hunt right now,” the President tweeted in August.
The Justice Department declined to comment on any discussions between Whitaker and the President.
The President’s lawyer, Rudy Giuliani, could not confirm the conversations with Whitaker but said the President views the SDNY prosecutors as out of control. “The president and his lawyers are upset about the professional prosecutors in the Southern District of New York going after a non-crime and the innuendo the president was involved,” Giuliani said in a statement to CNN Friday.
One source close to Whitaker pushed back on the notion that the Cohen situation caused tension between the two, emphasizing that Whitaker and the President have a “great relationship.”