Cruz, Rubio and Bush finally had a chance to shine in the Republican frontrunners absence but none of them seized the opportunity decisively 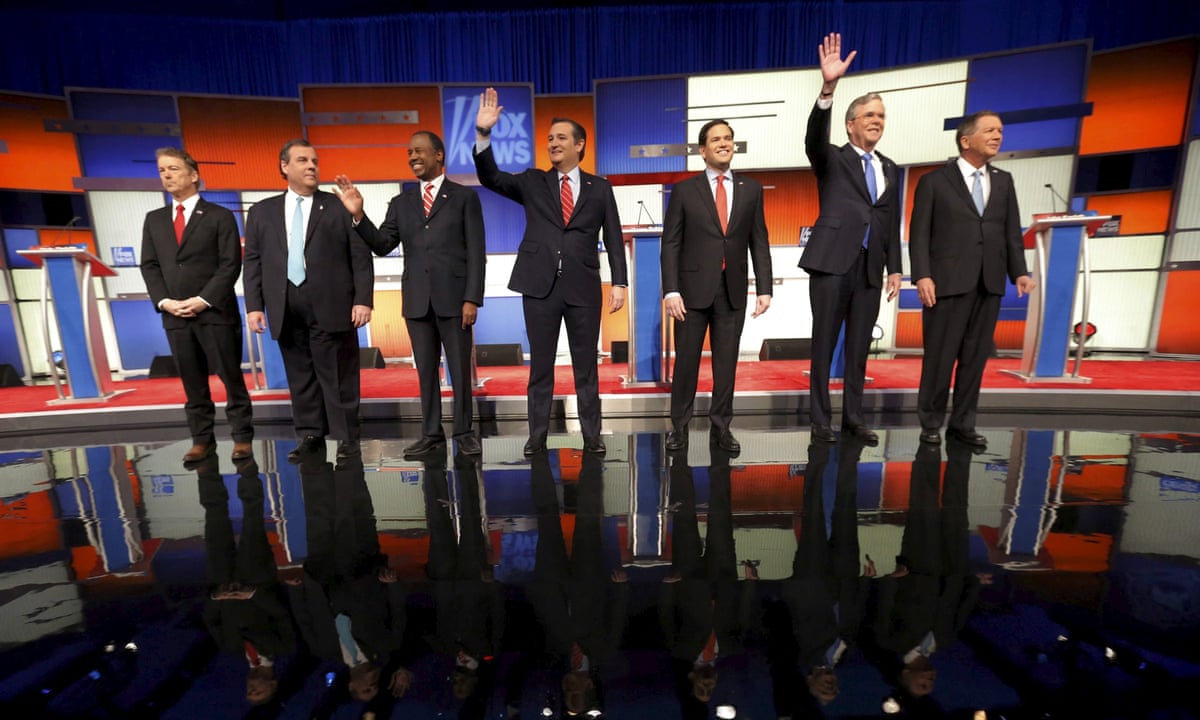 The clear winner of the final Republican debate, just four days before the first votes are cast in Iowa, was the Macavity candidate.

Just like the mystery cat, Donald Trump was nowhere near the scene of the crime at the Fox News debate. You could find him on rival news channels, but the damage was already done to poor Ted Cruz: the only candidate who could come close to beating him in Iowa.

Cruz, standing exposed in the middle of the stage, was subject to a barrage of fire from the moderators and his rival candidates. And Trump didnt have to do any of the dirty work himself.

At first, Cruzs Olympic-sized debate skills allowed him to shape the debate. When Foxs Megyn Kelly asked a tough question about why he flip-flopped on his feelings towards Trump (he used to praise him but now suggests hes a closet Democrat) Cruz chose to answer a completely different one.

Cruz pretended that Kelly had asked him to insult the Republican frontrunner: an imaginary question he was only too happy to condemn as an outrageous attempt to lure him into gutter politics. If they couldnt snag him on Trump, the moderators would try national security. Once again, Cruz proved himself a world-class question-dodger.

Chris Wallace asked him about his votes against defense budgets, so Cruz launched into an extended diatribe against Barack Obamas defense budgets. Even when asked a follow-up in response to a few barbed comments by Marco Rubio Cruz talked not about his own position, but about his idol: Ronald Reagan. In all cases, it is far easier to talk about Reagans status as a Republican idol than your own awkward budget votes.

Soon even the expert debater was wilting. Cruz began complaining about mean questions and offered an underwhelming joke about threatening to leave the stage. The Des Moines audience seemed unamused, and began cheering for the moderator.

In an age when journalists are almost universally loathed, especially by Republican voters, it takes a special kind of candidate to elicit sympathy for the downtrodden media. Then again, perhaps Donald Trump had recruited all the anti-Fox Republicans to his own rival event at the same hour.

Trumps absence allowed the moderators to train their fire on another up-and-comer: Marco Rubio.

Rubio blinked furiously as he dealt with a series of flip-flopper accusations on cap-and-trade legislation and immigration. If blinking is a sign of nervousness, the young Florida senator was clearly unnerved by the moderators, who unkindly replayed video of his previous contradictory statements on amnesty for undocumented immigrants. Rubios eyelashes fluttered until he could regain his composure to challenge Jeb Bush standing beside him for also flip-flopping on immigration.

Yet Bush himself looked liberated by Trumps absence. He happily conceded that he too had flip-flopped on immigration. Like his fellow third-tier candidates, Bush was far more confident and fluid than he appeared at any other debate. That may be a low bar, but it reflects how far Trump has crushed his rivals spirit with his mere presence on stage.

John Kasich, who normally bumbled and flustered his way through a debate, seemed to be loving every minute. When Wallace described him as an inside-outside candidate, Kasich pursed his lips several times in a strange kind of pout. He almost loved the question so much that he wanted to kiss the moderator.

Later Kasich was confident enough to explain his position on social policy and the governments ability to help those in most need. We innovated the government, said John Kasich, before talking about low rates of recidivism, drug addiction and mental health. It might just have been the most substantive, meaningful response in any of the several Republican debates.

Which obviously meant that it was a terrible debating tactic. There were no promises to kill Isis, and no canned lines attacking his rivals. In a year of Mexican walls and carpet-bombing deserts, Kasichs thoughtfulness will clearly lead nowhere.

You could tell the Trumpless debate was an almost normal presidential event by the nature of the closing statements. There was something almost comforting in seeing the candidates fill their own suits, rather than Trumps.

Chris Christie, modeling himself on George W Bush, insisted that terrorism in this country scares everyone. Which is a statement the entire world can surely agree on.

Jeb Bush insisted several times that he had a proven record, begging the question why he needed to mention such a proven thing quite so many times.

Marco Rubio ended his debate performance by citing the Bible, but Ted Cruz one-upped him by asking voters to pray on their decision.

But the line of the night came from the brain surgeon who somehow stumbled onto a presidential stage in 2016. Ben Carson quoted from the preamble to the Constitution, before adding his own memorable summary: Enough said.