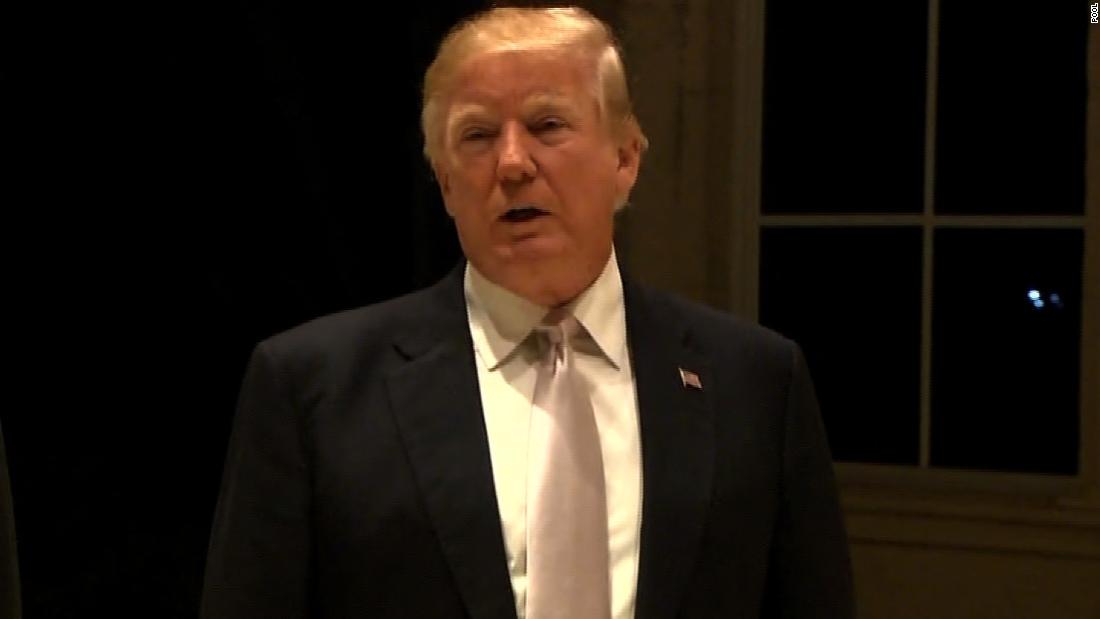 (CNN)President Donald Trump defended himself Sunday night after several days of controversy over his remarks about African countries, telling reporters, “I am not a racist.”

The President has drawn sharp criticism since he was reported to have called African countries “shitholes” while discussing immigration with lawmakers Thursday.
Democrats have been demanding protections for recipients of the Deferred Action for Childhood Arrivals program in exchange for border security funding that could include money for Trump’s promised border wall, but those talks reached an impasse after the President’s recent remarks. Congress is grappling with the issue as they negotiate over a spending bill they need to pass by Friday to avoid a government shutdown.
Trump and some of the lawmakers in the closed-door meeting Thursday have since pushed back on the characterization of his comments, with the President denying making the derogatory remarks and allied Republican senators taking to the Sunday morning shows to claim Trump never used the vulgar phrase.
Georgia Sen. David Perdue said Trump “did not use that word” and called the assertions that he did “a gross misrepresentation.” Arkansas Sen. Tom Cotton also claimed the President’s remarks were mischaracterized, saying, “I didn’t hear it, and I was sitting no further away from Donald Trump than Dick Durbin was.”
In a statement Friday, the two said they didn’t recall Trump making the derogatory comments, “but what he did call out was the imbalance in our current immigration system, which does not protect American workers and our national interest.”
Durbin, a Democratic senator from Illinois, said, however, that Trump did use “hate-filled, vile and racist” language in the meeting, according to the Chicago Tribune. Additionally, Sen. Lindsey Graham told fellow South Carolina Republican Sen. Tim Scott that the reported comments were “basically accurate,” Scott told the Charleston-based Post and Courier.
On Sunday night, the President addressed the looming government shutdown when asked if it would happen.
“I don’t know if there will be a shutdown, there shouldn’t be,” he said.
The White House and Democrats in Congress are negotiating an immigration deal as lawmakers face a Friday deadline to pass a federal spending bill and avoid a government shutdown.

Trump said he is “ready and willing to make a deal” on the Deferred Action for Childhood Arrivals program, but he doesn’t believe Democrats want to reach an agreement.
“They don’t want security at the border,” Trump said. “We have people pouring in. They don’t want security at the border. They don’t want to stop drugs, and they want to take money away from our military, which we cannot do. So those are some of the sticking points.”
The President’s comments come after he held on-camera bipartisan talks at the White House last week in which he appeared open to making a deal with both Republicans and Democrats. The meeting took place prior to Trump’s controversial comments from the Oval Office on Thursday.

Asked by reporters if he has spoken to North Korean leader Kim Jong Un following his refusal to answer the question during a Wall Street Journal interview last week, Trump again did not answer the question.
“We’re gonna see what happens,” he said. “They have a couple of meetings scheduled, a couple of additional meetings scheduled, and we’ll see what happens. Hopefully, it’s all going to work out. We’ll see.”
He added: “We’re going to see what happens with North Korea. We have great talks going on. The Olympics you know about. A lot of things can happen.”